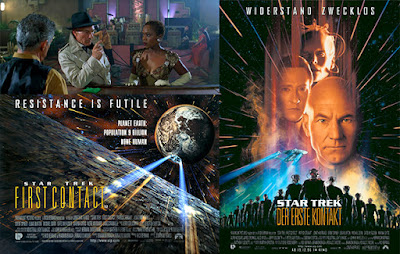 The World According To Warp

And so on to what is undoubtedly the greatest of the Star Trek - The Next Generation movies and almost, but not quite, the best movie in the entire run of movies of either generation... I would still say that Star Trek IV - The Voyage Home (reviewed here) is still better than this one... but only just.

This was the second time an actor who plays a member of the crew of the Starship Enterprise went behind the camera and directed the film while still playing his character on screen. On this one it’s the turn of Jonathan Frakes, who plays Will Riker in the show and movies, to take the helm and... well he does an absolutely fantastic job here. Like his predecessor in Star Trek actor turned director, Leonard Nimoy, Frakes also directed two movies for the franchise - this one and the next one, Star Trek: Insurrection. My recollection of Insurrection is that it’s much maligned but really not too bad a film. First Contact, on the other hand, is absolutely wonderful.

The film starts off with Patrick Stewart’s character Captain Jean-Luc Picard having a nightmare about his previous experiences with the Borg Collective (or The Borg, for short) and these were at the time, and probably still are, the most iconic and downright threatening of all the Star Trek villains created in the show’s history. They debuted a few years earlier in the Star Trek - The Next Generation TV show and their reputation as being an almost unstoppable, collective consciousness who see the human race and countless other lifeforms as mere insects to be assimilated and then brushed away, made them a fan favourite and ensured their longevity and future appearances on pretty much all of the other Star Trek TV shows after their debut. Star Trek: Voyager even had an ex-Borg turned good, Seven Of Nine, as part of the crew. Captain Picard is perceived as a survivor of this experience in much the same way that one might perceive a survivor of the holocaust in the Second World War.

At the opening of the film, the Borg engage the Federation but Picard and the crew of the new Enterprise (that’s NCC 1701-E by now, if anyone’s counting) are ordered away from the rest of the fleet... presumably because Picard was once assimilated into the Borg collective and his superiors don’t trust him (and don’t realise his experiences give him a unique perspective on how to fight the Borg). As they monitor the raging battle, however, it’s clear that humanity is having serious problems defending itself from the Borg and so Picard rushes tot he rescue. Stopping only to emergency beam up Worf (who had gone on to be a crew member and regular character in the TV show Star Trek: DeepSpace Nine by this point), the Enterprise leads an assault which destroys the Borg ship. However, a pod escapes and starts warping backwards in time. The Enterprise follows in its wake, going back in time, and are protected by this ‘warp bubble’ when it turns out the Borg went back and wiped out humanity in the past, turning the Earth into one big machine planet. With the crew of the Enterprise the only ones left of humanity, they have to try and stop the Borg in the past and bring the timeline back into what it was before the Borg got there. Meanwhile, some wiley Borg have started to slowly take over and assimilate parts of the Enterprise... so we have simultaneous story threads taking place as some of the crew members have to fulfil a very specific mission on Earth, while the others are fighting to save the Enterprise and stop the Borg from calling other Borg from far away galaxies in the past. It’s all go, that’s for sure.

And that's the basic plot set up. But there are lots of interesting things to note about this movie.

It’s not an unusual thing for a time travel movie such as this one, for instance, to have the crew of the Enterprise travelling to fix things in their past but, to have that past era still be way in the future of the audience watching it is something a little different to what we’ve seen before. That era being the mid 21st Century, when Zephram Cochrane invents and tests the Warp Drive... an act which quickly leads to the Earth’s first contact with alien worlds, changing the course of our planet forever and leading the way to the Star Trek universe as we know it. This is, of course, the mission that the ground crew have to ensure still happens but once Zephram Cochrane gets wind of his ‘revered’ status in the future... well he’s not necessarily jumping at the chance to change the course of history.

Zephram Cochrane, of course, is a bit of a Star Trek fan pleasing addition to the storyline. Played here by James Cromwell, he was originally played by Glenn Corbett in the original 1960s TV show episode Metamorphosis. Ironically, he was played as a much younger person although the events of that episode were set many hundreds of years after the events of this movie. Which is okay, because he was being kept young and alive by the strange alien being in love with him on the planet he ended up on. So it actually makes sense to have Cochrane appearing as an older looking guy here, even though he’s younger looking in the earlier show. Of course, there’s a little slip in that Zephram Cochrane was said to be from Alpha Centuri in the original episode but, I’m sure this can be easily explainable as a slight lapse in the full info and the crew of the original Enterprise’s remembrance of it. Of course, it would have been great to have Corbett reprise the role in that it doesn’t matter he should have looked older but, alas, he was already three years deceased by the time this film was produced. Cromwell plays the role really well, though, and turns Cochrane into a real flesh and blood character with the short time he has in the role.

There are some other pleasing cameos in the film for Star Trek fans too... both human and non-human. We have the return of the Dixon Hill 1940s noir holodeck novel that Pickard invents in the TV show and, appearing in this, as a completely different character, is Ethan Phillips who played Neelix in the TV show Star Trek: Voyager. Also cameoing from Star Trek: Voyager is Robert Pickardo as another iteration of the holographic Doctor he plays in that show. And, of course, Dwight Shultz returns as the stumbling Lieutenant Barclay, the character he played as a semi-regular guest appearance in later seasons of Star Trek - The Next Generation.

And then we have the Borg themselves, of course. Here we have a new character in the form of Alice Krige as ‘The Borg Queen’... which a lot of people were quite annoyed about, given what we know of the species as a collective consciousness, but I think they can kind of get away with it here to some extent. She is primarily there to go toe to toe with Brent Spiner’s popular character Data, in a section of the film which I personally refer to as ‘The Last Temptation Of Data’. She does a magnificent job here, inhabiting an almost visually iconic character and clearly holding her own against, and complimenting, Spiner’s much loved performance. Which apparently wasn’t easy as both the costume she is wearing, the make up and the black contact lenses... were apparently more than challenging.

Speaking of contacts... LeVar Burton’s Geordi La Forge character has finally ditched the visor he’d been wearing in the role for the previous nine years and has robotic eyes instead, finally letting fans of his character be able to see what he looks like properly. It’s actually not as much of a jolt to the system seeing him like this as you might think and I found myself accepting his new look pretty much straight away.

For the musical score we have the late great Jerry Goldsmith returning to the franchise, where he would stay until the recent reboot movies. Assisting him with additional scoring on this one is his son, Joel Goldsmith, who is also not with us anymore. He can sure write music that sounds like his dad might have composed it, though. Together, they provide a score to the movie which is one of the best of the series and which brings some beautiful new themes along with the return of Goldsmith’s famous Star Trek - The Motion Picture main theme (which had been associated with Star Trek - The Next Generation since that show had started anyway) and the Klingon sub theme which he used in that one and which returned in his score for Star Trek V - The Final Frontier (reviewed by me here) and which is now used as a ‘hero theme’ for Michael Dorn’s Klingon character Worf... which is a nice touch.

And that’s about it on this one. Star Trek - First Contact is full of action and it really doesn’t pull its punches on the horror of the Borg situation either... even Picard is shown ‘mercy killing’ one of his own crew just before they are fully assimilated into the Borg collective and he has no problem mowing down ex-crew members turned Borg with a machine gun in a scene either. Additionally, my favourite Next Generation character Deanna Troi, played as always by the lovely Marina Sirtis, gets to play an outstanding drunk scene opposite her on-screen lover Will Riker, as played by director Jonathan Frakes, and she does it really well. Would liked to have seen these movies making more of her, to be honest. But this is just great and the film loses none of its charm and power for me now, watching it 20 years since seeing it on its original cinema release. Frakes manages to give us one of the ‘almost perfect’ Star Trek movies and, although he does a fairly good job on the next one, if memory serves me correctly, this really was the last hurrah in terms of truly great Star Trek films until the reboot from a few years ago (the third installment of which is out in cinemas this summer, I believe). If you need a jumping on point for the Star Trek - The Next Generation universe... well this movie is one of the most entertaining ways to do that, it has to be said. So if you feel a hankering to go and watch one of these things, as Pickard would say... “Make it so.”