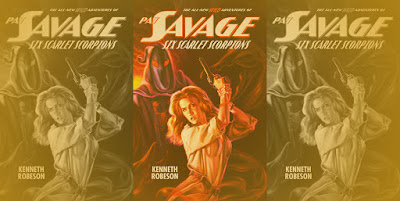 Will Murray is back, writing under the old Street and Smith Kenneth Robeson pen name to create another epic tale in the Doc Savage series, except Doc isn’t actually in this one and, I’m happy to say, doesn’t get too many mentions in it either (I’ll explain while I’m kinda happy about that a little later). Pat Savage - Six Scarlet Scorpions is the first of Murray’s ‘solo’ adventures detailing the stand alone exploits of Doc’s, almost fearless, cousin Patricia Savage... known by many as The Woman Of Bronze or, if you go by the very enthusiastic back cover blurb here, “the golden-eyed Girl of Bronze”.

Pat Savage was always one of my favourite characters in the pantheon of Doc’s wonderful ‘brothers’ in arms although, he really never liked her getting involved in any of his adventures for fear for her safety. She only appeared in 39 of Kenneth Robeson’s 181 published (in his lifetime) Doc Savage novels but she was always a stand up character in my book, starting off in her first adventure in the Doc Savage tale Brand Of The Werewolf and sporadically after that... whenever she found an opportunity to horn in on the action. Over the last 20 or so years, Will Murray has been writing new Doc Savage tales, many of them reviewed here, and he’s seen fit to include Pat in a fair number of them. Well, I guess she must be a popular character because he’s now written Six Scarlet Scorpions which is her first official stand alone adventure. At least in prose form... I believe Millennium Press released a one-shot Pat Savage comic in the 1990s, an issue which has continued to elude me to this day as I wait for that strange mix of art and magic phenomenon which I like to call... the right price.

Now, let me define what solo adventure means here. In the case of Pat Savage, it doesn’t mean that she’s going it alone for this one, it just means Doc Savage himself is never in the picture and, although I was expecting him to turn up towards the end of the story, he doesn’t actually do that and I think that’s right and proper for the first time Pat goes it alone. I’d welcome guest appearances from her cousin in future novels in this new range (I’m assuming there are going to be some because this one rips all the roars and roars at all the rips) but she needs to fly under her own wings the first time out, I reckon..., so I’m pleased that Murray made that decision.

That being said, she does have the companionship, throughout the story, of Doc Savage’s most regular assistant from The Amazing Five, Monk (aka Andrew Blodget Mayfair), the chemist who is more known for his apish looks and physical strength than he is for his unquestionable excellence in his chosen field of science. There’s also a couple of appearances from his lawyer friend, Ham, but the majority of the action in this one is covered by Pat and Monk working as a team.

And it’s a pretty good team.

Murray start things off with a plane crash in the desert in Oklahoma and the whole story is set in the relatively near vicinity of a few towns and a mountain range. Anything within a short plane ride away, in fact. The story involves the ‘vinegarroon’ scorpions of which there are more than six... although the title of the story makes for a nice alliterative attraction... and a chemical substance which causes either heavy disease or death. Of course, with a chemist in tow, Pat should be able to solve this one easily so the writer throws Monk’s portable chemistry lab out with the bathwater and we have a story based on a mystery disease which can’t suddenly be solved and cured within a couple of hours. Especially since Pat and Monk soon find themselves fugitives from the law and its harsh brand of Oklahoman justice. So the two have a lot on their plate as they try and stay away from the police and investigate the strange mystery of the head of a bunch of criminally ambitious indians, lead by a character ripped almost from the silver screen’s theatrical serials and known as the masked mastermind, The Standing Scorpion. And it’s exactly the identity behind this mysterious villain which takes a lot of our two main protagonists collective brain power to  find out, just like it always used to do in those old 1930s - 1950s serials.

The book is loaded with cliffhanger action, as you’d expect from something which is trying to emulate the pulps. One of the initial qualms I had when I started reading this was that, without the curious quirks of the Doc Savage character to describe and work into the main narrative, this felt less than a Doc Savage novel and more like something else. Which, of course, it is. Monk and Ham comply to their character traits and it’s just something that I had to accepts. Pat is not Doc and the experience is never going to be quite the same as reading one of those Man Of Bronze adventures... and nor should it.

All in all, this is a pretty strong opener for the first of the stand alone Pat Savage tales and I really have to slap Murray on the back here and say that he’s done a grand job with the lady. There were, of course, a couple of things I didn’t like about the novel (isn’t there always?).

My first problem with it was the way in which Pat and Monk treated an aircraft pilot to steal his plane. Seems to me this is not the best way forward and it seems unnecessary and pretty out of character for any of Doc Savage’s associates to behave the way they do here. No comments are made to redress the balance about what happens to the fellow later and how he can be compensated. This just seemed a bit off kilter in terms of the way the characters would conduct themselves and I would have liked a bit of an explanation for it.

The other thing which bothered me was something which happens at the end of the novel. The stories usually take place at some point in the existing Doc Savage timeline from the early 1930s to the late 1940s and it’s often pinpointed exactly where the adventure fits in with all the others in the chronology. This one, from some things which are said, I take to be set somewhere in the mid to late 1930s. However, without giving anything away, in as much as you know that Pat, Monk, Ham and Monk’s pet pig Habeas Corpus will have to survive the adventure due to their later, published exploits... something happens which forces the three two legged adventurers into a month of quarantine. Now I can’t say myself that any of these three characters were out of action for a month in the original books or not but, if they were, I’d like to know about it and find out which two Doc Savage yarns this story fits itself between.

However, when all is said and done, these are really minor grumbles here and, as usual, Will Murray does an outstanding job of carrying on the Kenneth Robeson name. I’m hoping this tale is as popular with other readers and as fun to write for Murray as it was for me to read it because I’m really hoping these ‘new adventures’ of Pat Savage will be a regularly scheduled literary event every year. Whether they are or not, though, fans of Doc Savage and his merry colleagues could do a lot worse than picking up Pat Savage - Six Scarlet Scorpions and giving it a good reading. I’m glad I did.
Posted by NUTS4R2 at 15:18