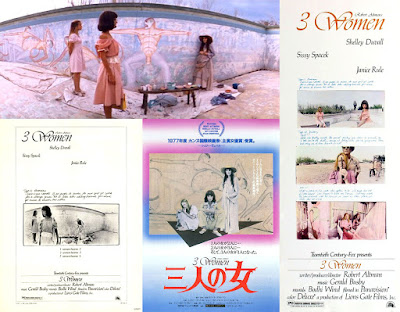 It’s funny... the first Robert Altman film I saw, years ago in my late teens, was M*A*S*H and it blew me away. Loved the style of it and found the way that the main parts of the book seemed to take a backseat while the lesser scenes were pushed into the foreground in Altman’s adaptation, made it a pretty good companion piece to the source (which is also excellent, by the way).

Ever since then, however, I’ve found Altman fairly hit and miss and, to be honest... mostly miss, although I seem to remember I quite liked McCabe and Mrs. Miller and I still haven’t seen The Long Goodbye yet (it’s in the ‘to watch’ pile). 3 Women, however, is one of those movies I’ve always wanted to see because a photographic still, usually the same one of a publicity shot not actually seen in the movie, was always turning up in various books on fantasy or horror cinema when I was reading through those in my teens. Having now seen the film I can’t really understand why it would have been included in them but... there you go, some people wouldn’t know a fantasy or horror movie if it leapt up from behind a rock and bit them in the face. As proved to me on an almost weekly basis on Twitter, it seems to me.

Altman has cited that he made 3 Women based on a series of dreams he had been having and he has also gone on record saying it was inspired by some of the films of Ingmar Bergman. Looking at this, I’m guessing that Cries and Whispers and The Silence were probably the most influential on this one here... although they’re less of a template and more of a mood which Altman then goes on to explore in a more 'crowded palette’, as it were.

The film concerns three women (no... really) who find themselves thrust into each others lives. The first of the three is Pinky Rose, played by Altman regular Sissy Spacek. She is a young, impetuous girl who leaves home in Texas to come to California and work in a kind of water therapy clinic for the elderly. It’s here she meets Millie Lammoreaux, played by another Altman regular, Shelley Duvall. Millie acts as if she’s a very popular and busy person but it’s soon clear that nobody really wants anything to do with her and they tend to ridicule her behind her back (or sometimes right up to her face). Pinky, however, is very taken with Millie... to the point of obsession... so when Millie needs a room mate, she goes to live with her.

When Millie takes Pinky to a bar, she meets the third woman of the story, Willie Hart (played by Janice Rule), an artist who hardly ever says a word and who is always working on one of many, kinda surreal and hypnotic paintings which are dotted at various places over the local county. Hart is rarely in the story much (and I do almost wonder why it was called 3 Women because of this fact) but her presence is felt by the constant reminder of her paintings and because of one of a number of tragedies that happen over the course of the movie. And, inevitably, because she only wanders into the odd scene here and there, not saying anything (you only hear her talk in the last ten minutes of the film), she is made all the more interesting and mysterious a character for it.

Certainly an interesting character for Pinky, who loves her spooky paintings and is almost as obsessed by her as she is with Millie. The film is a character study as we watch Pinky and Millie interact over a period of time and see how Pinky manages to get on Millie’s nerves so much that, when Millie commits an indiscretion with somebody on the peripheral of their lives, she then later goes on to regret what she angrily says to Pinky next in no uncertain terms.

At this point in the film something happens (which I won’t spoil here) and Pinky’s personality changes dramatically to something which seems to be more like what Millie imagines she, herself, is like... as opposed to the reality of the situation. There’s a scary, almost alien, moment where Spacek’s Pinky just laughs and... well it’s really quite unsettling in the way this exclamation is uttered. Pinky and Millie soon find themselves at each other’s throats until... a strangely surreal dream sequence happens and, before you can totally fathom how this has affected Pinky, we are thrust into another tragic event and things get vaguely bloody.

It’s then that we get an end coda for the movie which is totally open to interpretation due to its ambiguous nature. At least that’s the way it seems to me. My interpretation is that the three women have eaten/absorbed each other’s personalities and shifted the hierarchy, somewhat, living together in some kind of ‘survival mode pack’ with a death which has happened off screen being something they may or... you never know... may not, have been responsible for. It’s quite bleak and there’s not much closure in it, with certain mysteries implied in the movie left unanswered. It’s the kind of ending I really don’t mind, to be honest, as it gives the movie some time to live on in your mind for a while after you’ve first seen it.

The Bergmannesque element Altman cites is fairly evident in the design of the shots throughout as he uses reflective surfaces such as glass to double and treble the image planes in the movie so you can get some solidly delineated sections of the screen collaborating for the viewer in ways they aren’t actually doing in real life... except the viewer can see the juxtaposition of the characters in ways which lend an interesting dynamic to the movie. Although, again, I was puzzled as to why the director fairly often dwelled on splits of two with a title like 3 Women... especially since he also uses a set of identical twins to further push the illusion of duality throughout the movie. Although, now I think of it, it could also be a motif used to push the idea of a split personality which, by the end of the film, is something that pretty much all three of the title characters seem to be exhibiting in terms of splitting off into new/alternate versions of themselves/each other.

It’s an interesting movie and I’m glad I saw it. I’m not sure I would recommend it to anyone but the most sophisticated or, possibly, most jaded of cinephiles but, fans of the director’s work who appreciate the naturalistic kinds of performances he lets his actors run with shouldn’t have too much of a problem with this movie. Not everyone’s cup of tea, to be sure, but certainly something which I think was worth my while so... yeah... one to consider, maybe.
Posted by NUTS4R2 at 18:59