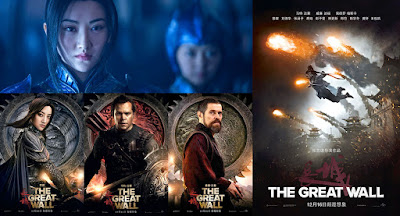 Absent Without
Official Leave in China

The Great Wall is a Chinese/American co-production directed by the epic director Yimou Zhang, who brought some great looking films such as Hero (which I loved) and House Of Flying Daggers (which I didn’t but which still looked like some pretty impressive eye candy to me anyway) to the cinematic table. As such, I knew I would probably get around to seeing this movie, even though there was some pretty strong backlash at Matt Damon being cast in the lead role. I don’t, in all honesty, understand the backlash on this one as it’s not once implied that the character was, in any way, a foreigner supervising the construction of The Great Wall of China... it’s already well intact before his character and his companion arrive on the scene. Nor is he playing a Chinese character in this so... yeah, it’s strange what some of the bizarre things you see flying around on the internet are these days.

None of that stuff matters to me, though, to be honest. When I go to the cinema I want to see a great work of art and, preferably an entertaining one. Although The Great Wall is less stylistically rendered than I’d hoped, all in all this is a fairly amusing piece although, it has to be said, it’s pretty much bobbins.

The film tells of a couple of mercenaries who are after the secrets of the black powder (aka gun powder) and their expedition leads them smack into contact with an army at a secret base at part of the film's titular construction who not only hold the secrets of the explosive substance but who, more importantly, are defending China from a terror of which the Western world remains ignorant.

Originally treated as criminals for execution by Commander Lin Mae (played wonderfully by Tian Jing), Matt Damon’s character William and his companion Tovar (played by Pedro Pascal) join forces with the Nameless Order who are defending China against a foe that William and Tovar prove their worth against even before stumbling across their new allies at The Great Wall. So they collaborate although Ballard, another seeker of the black powder played by Willem Dafoe, convinces Tovar to help him steal the goods in a move which slightly fractures the clear narrative at one point but without doing too much harm to the film.

And, of course, it turns out that the common foe is a group of alien lizard creatures who landed on Earth centuries before on a yellow meteorite and who try to cleanse the land every sixty years. Personally I would have preferred dragons or something because I wasn’t a great fan of the design of these aliens and their weak spot eyes located in their shoulders. Nor was I impressed that the much talked about ‘Queen’ creature was really not that much different than any of her subordinate creatures and... yeah, that may be one of the reasons why I was suitably unimpressed by any element of perceived danger in the movie, to be honest. Whether these creatures were actually based on anything from Chinese legend is not something I can actually find out but, if they weren’t, then I think the creative forces behind the film could have been allowed to have done a much better job on the design of these creatures, in all honesty.

Now, I like this director’s style because his compositions are usually very tight and he often employs bright, saturated colours to create an almost hypnotic effect on the viewer. Well, he certainly did have his signature in moments during this film to be sure. There’s some impressive colour coding of the various clans of warriors fighting against the alien creatures in the story, with bright blue, red and yellow armour clad warriors all neatly aligned in different sections of the screen. For instance, the bungee jumping warriors of Commander Mae’s forces are all armoured in bright blue and this, to be honest, gives a certain order to the proceedings. There’s also a lovely moment towards the end of the film where Matt Damon and Tian Jing are ascending the inside of a thin, tall tower, the walls of which are regularly punctuated with stained glass windows which allows the director to throw in big, interpenetrating shafts of rainbow colours colliding on the screen at once. This is a great look and one almost wonders why the characters in the movie don’t stop and take stock of the opulence of their surroundings at some point.

That being said, I felt the movie seemed a lot less than ‘a Yimou Zhang movie’ than I’d hoped for and, though their were a lot of scenes with bright colours and somewhat interesting shot compositions, there seems to be a lot less of this stuff at play here than in any of his other works I’ve seen and it almost felt like it was being deliberately dialled down in some places for the US producers. Most of the time the film just felt like a big, pulpy, standard American action movie instead of the graceful, kinetic art that I associate with both the director and his country so... I don’t know, it all seemed a bit less than what it could have been, truth be told. I don’t know if this was because there were so many hordes of dullish CGI lizard creatures for the cast and crew to wrangle but it somehow seemed tired and yawn inducing when, really, what I was expecting from the director and cinematographer was for them to bring the ‘bright and shiny’.

However, the film is entertaining enough in a pulpy fashion and, although Ramin Djawadi’s capable and appropriate score made me think of Pacific Rim (reviewed here) a little too much, it reminded me of recent films like Victor Frankenstein (reviewed here) and The Last Witch Hunter (reviewed here) in that I felt they were the kinds of films the old Hammer Studios might have chosen to be franchises back in the early 1970s cycle of their studio. Added to this you had the principal actors plus a load of, somehow, familiar faces (including one of the director’s regular actors, Andy Lau) and everyone, including Matt Damon (who I would expect this of anyway, given his indisputably good track record), does a fantastic job in this. Willem Dafoe seems a bit wasted and could have done with a larger and better written role but I suspect, like a few of the actors (I’m guessing here) he only took on the role because he wanted to work with this great, almost legendary, director.

Yes, it’s bobbins but it’s hugely entertaining bobbins and, while I was less enthusiastic about it than I imagined I would be, it’s not a wasted trip to the cinema and I would certainly recommend it to lovers of period set fantasy epics. It’s no Ray Harryhausen movie but it’s certainly in the same cinematic ball park and, while I wouldn’t say the screenplay is any better than any of those early monster fests from the 1950s, 60s and 70s, it certainly feels like it could have been written then and has that hokey, slightly toothless feel that a certain generation of cinema-goers might love. Although, like most of these kinds of fantasy films, this one could have been improved with the addition of Caroline Munro, to be sure. The movie even finishes up with an animated end credit sequence which is not a million miles away from some of those beloved, old Spaghetti Western opening title sequences like The Big Gundown (reviewed here). So, you know, there’s a lot of interesting things to watch out for. It’s not for everyone but you won’t know until you give it a try, I guess.