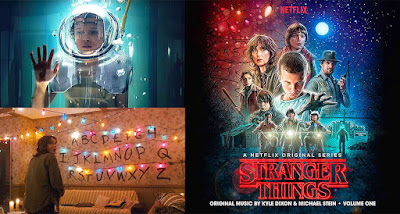 A friend of mine gave me access to Stranger Things saying “This is a show I think you might like.” Since it’s one of those streaming thingies on a web site (or something like a web site but a bit beyond my understanding), he probably knew I would never bother to try and see this show any other way than him letting me to watch it. I really don’t like the digital world and streaming deprives me of the neccessary ownership of holding a shiny disc in my hand, not to mention allowing me to ignore the studio if they decide to play puppet-master and pull it from their virtual releases schedule. Having now seen it, I’m not sure I’m the particular audience that Stranger Things is catering for... although I did warm to it by the final couple of episodes.

Set in the, presumably fictional, town of Hawkin (named after Professor Hawking, I would guess), this is the story of four teenage friends who are into cool stuff (like Dungeons & Dragons, for example) and it mostly takes place in 1983. However, as we see at the start, some kind of ‘monstrous thing’ is unleashed and, when one of the boys, Will Byers, goes missing, his three friends try to find out what’s happened to him in the face of establishment adversity, even when the boy’s body is found (which will make sense once you start to watch it). Along with their new super powered, escaped Government Research Group experiment friend 011, aka eleven or Elle for short, the friends become embroiled in a fantastic adventure involving an alternate layer of reality, a monster and a sinister, threatening Government conspiracy. And, of course, multiple sets of investigations... where different, older sets of characters get involved with alternate elements of the mystery so everyone can accidentally end up meeting near the end and then, by pooling their resources and discoveries, beat the evil government agency responsible and find the missing character.

So, yeah, it’s trying to tap into exactly the same kind of source material that J. J. Abram’s Super 8 (reviewed here) was trying to get into... and so you have loads of 1980s horror and science fiction references on show here, with many nods to Stephen Spielberg thrown into the mix... along with stuff like ‘Salem’s Lot, John Carpenter, The Evil Dead... basically everything you’d want to showcase in a loving homage to the 1980s. Even some of the music is a little like something John Carpenter might have come up with for The Fog (reviewed here) in a kind of light form. Having said that, the producers have included The Bangles cover version of Simon & Garfunkel’s Hazy Shade Of Winter in one episode and, thinking about it, that’s a bit of an anachronism. Admittedly it’s a disturbing cover for me because The Bangles only cover two thirds of the original song and left out my favourite verse (“... at any convenient time. Funny how my mem’ry skips while looking over manuscripts of unpublished rhyme... drinking my vodka and lime...”) but what really infuriated me as I was thinking about it on the bus coming home from work was that Stranger Things Season One is set in November 1983... but The Bangles didn’t bring that version of the song out until 1987, if mem’ry serves and is not skipping here. So, you know, if you’re going to do 1983... get it right!

So, okay... all this referential stuff is something I should be well into and, normally I would be... but I found it really hard to get into here. Ditto for my dad who only managed to make it a half an hour into the first episode before bailing on it in disgust at the amount of formulaic writing showcased here. I at least made it to the end of the last episode and, I’d have to say from about episode 5 onwards, things start to get a little more interesting in terms of just wanting to find out what is going to happen next. The characters do grow on you.

For the most part, though, all this stuff is dull and clichéd... something you don’t want to have with even the most post-modernly eclectic approach to popular entertainment and, with its obvious plot line, it did feel like somebody had just taken an old episode of The X-Files and expanded it into something unnecessarily longer. The opening of each episode proclaims it to be A Netflix Original Series but, honestly, it’s so far from original it’s not funny.

That’s not to say there aren’t any plus points and, like I said, I did stay to the end with it. For example...

Although the story is pedestrian in nature and not exactly full of surprises (trust me... you’ve seen it all before, sometimes dressed a little differently), it does at least stick rigidly to being an all round, coherent narrative and this is very much improved by having some really warm characters and, frankly, some great actors in it. I’d heard that Winona Ryder was in this one and she does an absolutely phenomenal job as Joyce Byers, the mother of the missing boy. Of course, it took me half an hour to realise which one she was in it because, frankly, she still looks like she’s in her mid twenties and certainly not old enough to be anyone's mother, especially not of the teenage brothers depicted here. She plays a character halfway between losing it at the disappearance/possible death of her boy and a perceived crazy but driven warrior as she becomes embroiled in the phenomena... talking to her absent son through Christmas tree lights etc. Don’t worry... it’ll make sense if you sit down and watch it.

She is more than ably supported by David Harbour as Jim Hopper, the post-tragedy washed up excuse for a town sherriff who, perhaps somewhat predictably, straightens himself up and opens his mind, becoming one of the real good guys when he realises there really is a government conspiracy and that Joyce’s youngest boy may still be alive. And we have Mathew Modine as the head of the Government group who knows much more about what’s going on, and what’s gotten loose, than anyone else in town. Actually pretty much everyone is really good in this and I could just list the whole cast here and say, these people are all doing a swell job... but you’ll see that if you watch the show.

Special shout out to the four kids who are going after the mostly absent Will, though, because they’re awesome... Finn Wolfhard, Caleb McLaughlin, the outstanding Gaten Matarazzo and the quite unbelievably phenomenal acting tour de force that is the eleven year old (at time of filming) Millie Bobby Brown... who plays Eleven with an amazing level of intelligence and understanding that a lot of actors don’t sometimes get when they are over twice her age.

Now, the story is clichéd, it’s true, but it is kinda addictive... mostly in terms of staying around to see if you are right about what’s going to happen next. However, I did think that the 1980s theme was kinda downplayed quite a lot in places and... I don’t know why I didn’t respond to it much since, well, I remember the 1980s pretty well in terms of the pop culture. It’s funny, I really like movies and books that are retro set in the 1960s and I have to wonder if the majority of the people on places like Twitter and the like who are raving about Stranger Things are so positive about it because many of them are quite young and it gives them a sense of borrowed nostalgia for a time they never, actually, properly lived through themselves, maybe? I don’t know whether that’s true or not but Stranger Things has proven very popular with young audiences, it seems to me, and a second series has already been commissioned.

Which is lucky because, as is the nature of such shows written by people who know that a follow up could always be on the cards, there are still quite a few questions raised about, for example, the strange world of ‘the underneath’ which features so prominently in this as a mystery element. Is it really a parallel realm or is it, in fact, a near future reality of this town in this fictional version of 1983? Is one of the most interesting characters in the show really gone at the end of the last episode or will that person return for the second season? Is one of my favourite characters really dead at the end of episode three or can something be done about that? And what is really going on with that other character everyone has been making such a fuss about? There’s definitely something up with him.

So, yeah, the writers have written it as open ended as possible so they can riff on other genre conventions in the next series along... so there’s that. And that’s going to happen sometime over the next year, I would guess. Meanwhile, I keep asking myself if I’d recommend Stranger Things to any of my friends and, I think, judging from my own reaction and that of my dad, that it will probably play better to a much younger audience than people who actually lived through those times. It does have its moments of intrigue and mystery and, in terms of direction, shot framing and some nice camera movement which echoes some of the props from one of the episode's directors. It’s certainly a competently put together piece, if you can ignore the clichéd nature of this particular postmodernistic beast. So if you’re 30 or under, I suggest you may want to give this one a go and... if you’re over that age, maybe you’ll try to be a little more understanding and forgiving if some of the stuff in this seems painfully obvious and protracted. At that age you’re not necessarily the target audience, methinks.
Posted by NUTS4R2 at 19:08