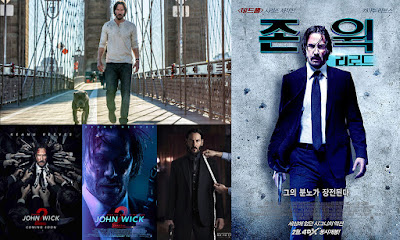 And so the Lone Wolf and Cub figure of contemporary American cinema is back... or should that be Lone Wolf and Dog? And instead of Tomisaburô Wakayama cutting a bloody swathe through hundreds of men as his wandering ronin figure, we have the modern stray dog samurai that is John Wick, shooting his bloody way through hundreds of men in a poetic celebration of kinetic violence.

Now, I’ve always had a certain amount of respect for Keanu Reeves. I don’t go and see all his movies but I think he’s an actor who brings a lot of heart and a certain amount of ‘under the surface’ perception to his roles which some other actors might not project as well as he can. He’s an actor who, I suspect, brings a lot of the historical, cinematic intelligence of the medium he primarily works in to the party and I can’t help but think that if Akira Kurosawa was alive today and making American movies, Keanu Reeves might be his contemporary Toshiro Mifune of choice. And as a big plus, Mr. Reeves is an actor who looks like he can do the kinds of wonderfully impossible things he does in these movies.

I actually quite liked the first film in this series, John Wick (reviewed here) and was, therefore, not expecting this second movie, John Wick - Chapter 2, to be much more than a, hopefully, competent follow up. As it was, though, I was pleasantly surprised because this movie is at least the equal of the first film in the series, possibly even a little better, and I had a really great time at the cinema with it.

It’s pretty much what you would expect in terms of content for a sequel to an explosive action movie in that it’s totally a series of well planned fight sequences strung together in a way that showcases some beautiful ‘bullet ballet’ moments where Reeves and, presumably, his stunt man, perform a dance of truly beautifully choreographed moves as hot lead penetrates the fleshy folds of Wick’s less than innocent victims in the truly ‘impossible odds’ style which has been the legacy of Japanese chambara over the decades. I’m not saying Reeves or director Stahelski are actually influenced by, or indeed channeling these classic samurai action classics of celluloid history but... it really wouldn’t surprise me, either.

Actually, right from the opening sequence, which is a continuation of the story from the previous film and set five days later, the audience has to come to terms with the fact that Wick is a little bit invincible in this, in some respects. Some of the things we are expected to believe a human being can get up from and shrug off, such as being hit at high speed by a car, before punching and kicking his way through to the next bloody victim is a little bit much and in some ways might be best suited to the over-the-top antics found in one of Jason Statham’s Transporter movies but, like I said before, Reeves always gives the conviction that he can do this kind of stuff and his facial expressions and body language reactions really sell the smoke and mirrors of this mythical, continued punishment that various people can inflict on each other.

It’s funny because, to write off my own analogy of the John Wick franchise taking its cue from various Japanese samurai movies, I feel that great directors like Kurosawa recognised that the action epic is not so much about the action itself as about the pauses between the action. However, John Wick - Chapter 2 barely lets up in the running, punching, shooting and stabbing business and this really shouldn’t work as effectively as the director seems to be able to make it work here and still have the scenes of violence achieve the poetically visceral impact that they do. He manages to do it, however, so this ex-stuntman turned director is definitely one to watch out for in the future, I think.

One thing I was sure of as I watched these scenes of cinematic brutality play out before me was that modern action cinema still owes a great debt to the James Bond movies of the 1960s. The aggressive editing of Peter Hunt’s legacy to modern cinema in those early 007 classics and, especially, the dialled up sound effects and comic book action on show in movies like From Russia With Love (reviewed here) are something without which the John Wick films, and many others like it, would not be able to exist in modern society. At least not in this form.

One thing I did pick up on in the choreography of the battles is the penchant for the main character to deal with one problem partially and then take out a few more problems before coming back to resolve his original dilemma. By that I mean, there are numerous scenes where Reeves will slightly injure an opponent and disarm him, then take out two or more other opponents, usually with bullet shots to the head (although there are some nice uses of knives and even a pencil here too) before finishing off his original opponent with a final shot. And this style of action takes place constantly like a repeat motif all the way through. I’ve not got a problem with it... I think it works well as a good survival strategy and it shows that the title character has a certain methodology and predictable approach to his fighting technique. It just seems to be a constant punctuation point, one scene after another, throughout the movie. It’s fun to watch though so... yeah, it kinda works well. I can’t remember if that specific way of fighting was a key factor in the character’s genetic combat approach in the first movie but... I kinda suspect it was. I’ll have to go back and have another look at it again at some point.

Of course, it’s not just the beautiful choreography and the pitch perfect performances of Keanu Reeves and his co-stars such as Ian McShane and, in a wonderful bit of stunt casting, Franco Nero, that make this movie worth watching. The director does some beautiful things with the compositions and especially with the coloured lighting which he uses in some sequences, bringing to mind the kind of artificial cinematography of the likes of Mario Bava and Dario Argento but without having it detract as much from the overall onscreen shenanigans. The media is definitely not the message in this particular director’s work but it does add real meat to the bones. This hyper-real approach includes a nice moment where Reeves is framed by an angel’s wings and there’s even an action scene set in a chamber of mirrors which manages to make you forget the horrible cliché of having this kind of setting in a movie. In fact, it’s almost as good as the one found at the end of the classic Bruce Lee epic Enter The Dragon. So well done to the people behind the lens for making this work so well.

One thing I didn’t particularly care for was the comic book emphasis on certain words in the subtitles to the characters when things need to be translated for the viewer. It’s certainly an interesting idea to emphasise certain words by making them bolder, larger, more colourful and possibly in a different font to the rest but... I don’t think it worked that well here, to be honest.

Okay, now about that story arc... I can understand why the director is saying that this movie series is planned as a trilogy and the ending of this movie, without giving anything away, certainly leads us straight into the idea of a sequel set very soon after. Even the opening of the end credits gives us a man who is trying to escape the shadow of his own destiny and, all the way through, in fact, you can’t help but feel sorry for Reeve’s former hitman character as he unleashes a chain of events that pull him further into the drama of the past life from which he has only ever wanted to escape. Admittedly, there is one scene where he almost brings his final fate on himself but it could be argued that the end result of his resolution to his immediate problems are a forgivable slip. This particular modern day ronin is one who you do empathise with to a certain extent and, if the series does play out as a trilogy as intended, I suspect John Wick probably won’t stand much chance of surviving to the final scenes of a third movie. Although time will tell on that one, I guess.

At the end of the day, John Wick - Chapter 2 is a blast that in no way lets down the memory of the first film and even improves on it, to some extent. I had a thoroughly entertaining cinema experience with this doomed and tragic character and, if you’re a fan of modern action cinema, then I suspect you will too. Certainly a movie where you might have to suspend your disbelief somewhat, at least in terms of the credibility of the human body to withstand the gruelling regime of near constant blows that the movie offers up to the title character’s ‘bullets for breakfast’ lifestyle. But, hey, isn’t suspending your disbelief a good part of what cinema is all about? Give this one a go.