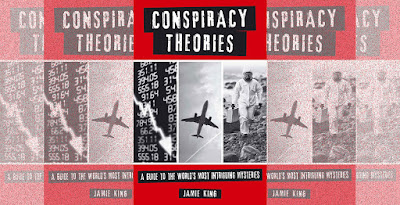 If this book looks and feels like a stocking filler for people at Christmas when you first approach it then... bingo! That’s pretty much exactly what it is... a novelty book which is, it has to be said, a very quick read but which, ultimately, probably won’t live up to many expectations you have of it unless you look at it for what it is. Luckily for me it was given to me as exactly that... a stocking filler at Christmas. Consequently, I wasn’t about to take much of it too seriously and that way I was bound to have an okayish time with it... which I kinda did.

Okay, lets get out of the way what this book isn’t because I wouldn’t want anybody to be misled here. Conspiracy Theories is not an in depth look at various theories and nor is it a study of the psychological factors which lead to the existence of such theories when the so called ‘facts’ of a situation are so over the top that only a child of five or some passionate, tin foil wearing nutter would give them any credence. What it is, instead, is a quick summary of many different theories with each theory briefly outlined in its own chapter... with each chapter lasting anything between one to five pages in length but with most of the entries being just under two pages. So, yeah, there’s not a lot of detail other than highlighting various different theories which have grown up around each subject.

I think where I might take the author to task a  little, although he does take this stance by his own admission, is in his lack of judgement on any of the theories proposed here. While you can tell that he has a sense of humour about certain things... such as former footballer and sports broadcaster David Icke’s belief that the world is being controlled by a group of shape shifting lizards... there are a lot of other theories where it’s less easy to tell if the writer has given any credit to them. Which is quite bad but, on reading the book I also found it kind of interesting and telling because, without that smoke screen of judgement to give the chapters an angle it produces a very uneasy realisation about some of the theories outlined here.

Why? Well because, once you get your eye in, you will start to perceive where, unless this guy is literally falsifying things for a book, the theory starts and the evidence ends. That is to say, while there are some really stupid beliefs thrown into illumination in this book, a fair few of them are not couched in the language of ‘allegedly this’ or ‘some people believe that’. Instead, the facts are presented as exactly that and though, in a number of cases, the theories they spawn can be quite devastatingly stupid (and others really not so), the facts of certain events seem to suggest that the people coming up with these things have every reason to at least look for something fishy because there seems to be no doubt in the case of certain ‘truths’ that something is being covered up.

Take the ‘suicide’ of Marilyn Monroe, for instance. I always used to accept that this was a suicide and the finding of an accidental overdose has sat quite well with me in later life when I personally know how easy it is to forget to take your pills or, worse, not remember if you took them and then accidentally double or triple up on them etc. So I’ve never really questioned this verdict too much. Funny then, that it takes a ‘novelty stocking filler’ to find out that, in actual fact, no drugs were found in Norma Jean’s digestive tract and the body was quickly, against the law, embalmed before too much close up investigation could be done. In fact, as the author here points out, if there were any drugs in Marilyns body which backed up the theory of an overdose, then the absence of them in the digestive tract means that they would have had to have been taken via and enema so... the question is... what person commits suicide by taking an overdose of barbiturates up their backside? So the question then becomes... okay, so what really happened and why were all those people on the scene so fast when they lived in other cities?

Now I recently read a book called The Invisible Gorilla And Other Ways Our Intuition Deceives Us (which I reviewed here) and one of the things I got out of that was that phenomena which seem linked in a cause and effect way are not necessarily so related... at least not by a direct cause. So I’d like to think I could make an okay judgement call when it comes to certain theories based on coincidental or non dependent factors which happen at the same time. Which is why a lot of the theories in this book seem a bit wilder than I would have thought sane people could believe, perhaps. However, what it also gave me is an appreciation for when certain things could be linked, or at least worth further enquiry, and there are a fair few in this book which actually do warrant further investigation in some way, it seems to me. And the Marilyn Monroe death would be a case in point.

There are some other, quite shocking, cases which possibly could have born a better investigation at the time but which were suppressed with a certain finality so that we’ll never know the truth. The ‘murder’ of Pope John Paul the First, for instance, shows the powers that be in the Catholic church in a very bad light when it came time to find the truth, with them seemingly hindering the investigation rather than helping it. Other conspiracies in here ring true on occasion, not because of their visibility but because they are being suppressed for no reason at all. For instance, no matter what your opinion is about the true age of the Sphinx and the culture which purports to have built it... did you know that many years ago archeologists found a small chamber in it which could reveal its secrets but the Egyptian authorities have allowed nobody to open it... using an excuse about archeological protocol to keep the chamber unexplored. You’ve really got to wonder just what it is they feel they’ve got to hide, right?

And so on. I’d have to agree with a lot of the reviews of this book that say it’s got no real substance to it... or meat on its bones would be another way of saying that.. but what I think a lot of those readers might be missing is the fact that the miniscule research involved is actually quite simply written and the lack of judgement and the way in which facts and theories seem to separate themselves from each other when you start to catch the mind of the writer within the words, means its actually a quite valuable, easy reference in some ways. I can imagine some people reading this, getting turned on by facts leading to those theories and then ignoring the wild ideas concocted and actually research the stuff properly with a mind to finding some answers. So that’s probably not a bad thing, to be honest.

Either way, if you’re not expecting too much from it then Jaime King’s Conspiracy Theories is a quick and mostly entertaining read and it’s probably a good thing to be reading if you only have an hour or two of time to get through something. If it’s detail you want then, alas, this book is probably not for you. I had a fairly good time with it though and I like to think I learned something, in a way. Time may tell, I guess.
Posted by NUTS4R2 at 19:06