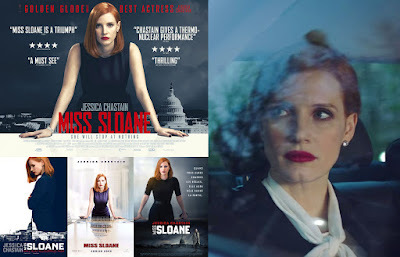 I didn’t know about Miss Sloane until a couple of weeks ago when I started noticing the posters and saw the trailer. This is possibly because the film is already 5 months behind the US release and, it turns out, was openly boycotted by the US gun lobby on it’s release... effectively killing its box office takings. If I’d have known that pro-gun people were that afraid of this powerful and entertaining movie then I would probably have rushed quicker to the cinema to see it. As it is... the pull of this one for me is that I’d seen Jessica Chastain, who plays the title character Elisabeth Sloane, in a few genre favourites such as Mama (reviewed here) and Crimson Peak (reviewed here) and I like her a lot. I also think she’s a real powerhouse of an actress and nowhere is that more ably demonstrated than in this riveting performance as a woman who has earned a big reputation as the ‘go to’ person to hire to lobby for you on particular issues in US parliament. Forgive me, by the way, if I get some of this political talk wrong as... I really don’t understand politics and the fact that I am willing to even half talk about them here maybe shows you that this is a film I really liked.

Now, the film starts of from a framing story which renders everything leading up to that framing device... which we catch up to before flashing back again every twenty minutes or so... as Chastain’s lead character is under fire in a trumped up Senate hearing investigating the illegitimacy of her ‘methods’ to successfully lobby against a specific issue. The film then starts proper as Miss Sloane’s agency is asked by gun lobbyists to ‘sell’ the idea of making firearms easily available as a positive thing to the women of America. However, this is something that really goes against the grain and she is given an opportunity, which she immediately takes, of quitting her firm and taking herself and as many of her team who want to go with her to a rival company to lobby for the exact opposite.

Now I’m not going to pretend that the issue of owning guns or not is a simple one. The bottom line is nobody should have them but the reality is... someone always will. It’s complex and I am far too naive and idealistic to get into that... especially in a film review. I mention it here to clarify that Chastain’s character is lobbying to make guns harder for the common thug on the street to have access to... by providing more rigorous checks before firearms are allowed to be bought. Which makes good sense to me as a short term workaround, to be sure.

So anyway, her and about half of her team are now working on behalf of something called the Brady Campaign for a firm headed by Rodolfo Schmidt, played here by Mark Strong, in direct rivalry to the people in Sloane’s old company. And there’s one of the reasons right there why this film is so electric. Not to take anything away from the other cast members in this movie, all of who do a blistering job and include stalwart John Lithgow as the senator leading the framing hearing but... Chastain is always brilliant and, frankly, Mark Strong just impresses me more and more every time I see him in anything. Together with some absolutely amazing costars, they contribute to an already powerful script full of ear catching dialogue, which is so beautifully pulled together by the director, John Madden.

The pacing on the film is almost '1930s screwball' furious and the performances, as I’ve said, all superb as the iceberg cool Miss Sloane is shown as the almost emotionless machine of a lobbyist using all kinds of espionage tricks to establish the outcome that she wants. This is all set up with Chastain’s opening, framing dialogue to the majority of movie, which also plays in the trailers from what I remember. And its just an absolutely brilliant and enchantingly well made ride but there is one slight weakness to the movie which, in this particular case, makes the film even stronger...

To explain that; what I mean is that although the film seems to be quite twisty and turny... it’s really not. The writers spend the first half  of the story setting up their ‘infallible’ title character before they start to show things going wrong for her and building on her vulnerability... except, if you’re like me, then you’ll known that the vulnerability is not necessarily a crack in the personae at all. Alas, the film is extremely obvious and, I have to say, within the first five minutes I had pretty much figured out what the denouement of the movie was going to be and, as it turns out, I was dead right. Now normally that would (and all too often does, unfortunately) annoy the heck out of me and, for the first third of the movie... I was kind of stewing over the obviousness of certain ploys the writers were using to try and distract me from the end game but, as I watched and the dialogue, acting and cinematography continued to win me over, I realised that if there was any other ending to this movie than the one they were building towards, I would have been incredibly disappointed in the film. So although I usually find the obvious ending to be a let down, here it was a welcome conclusion... my initial perceived weakness of the script became its strength, for me.

So it has all of that going on for it and, frankly, it’s just a gorgeous film visually too. The director uses the nice vertical set ups of walls and glass in the interior scenes to compartmentalise certain elements of the frame (as do a lot of great directors) and he does it in an interesting way. For instance, there’s a gorgeous shot which I wished he’d have lingered on longer, just after Mark Strong has sent Sloane’s team home for the evening to have a rest. It’s near the end of the movie and shows Sloane standing in the corridor full length on the left of the screen and, through and past the glass corridor coming down the middle/right side, Mark Strong siting down with his back to the camera and by the size and division of those two people in the frame, making a visual metaphor about how Strong’s character has begun to lose faith in Miss Sloane’s ability to win and using the mise en scene to visually (and presumably subconsciously, for some people) show the distance between them. It’s a wonderful shot in a film full of many such cool moments.

Max Richter’s, sadly unreleased on CD, score to this is kind of a minimalist masterpiece laying, stylistically, somewhere between Philip Glass and Hal Hartley’s musical compositions and it works really well here. It doesn’t overstate the obvious and it matches the icy veneer of the title character beautifully when it needs to. It highlights the things it needs to and stays out of the way when scenes call for it and it’s yet another score which highlights the need for this composers work to be released on a proper physical medium like compact disc.

And I don’t have much more to say on this one but I will say that, if you’re a fan of cinema and the way it can sometimes tackle important issues like corruption at the heart of a country, then you’d be really silly to miss this one while it’s doing the rounds. It’s not the kind of film I would usually repeat watch but I suspect I’ll be picking up the Blu Ray of this one at some point. Obvious or not, it deserves to be seen by a wider audience and it certainly doesn’t deserve the stupid numbers it got at the US box office. It also firmly seals the reputations, as far as I’m concerned, of Jessica Chastain and Mark Strong as being two of the finest modern actors working in cinema at the moment. Go see this one.
Posted by NUTS4R2 at 18:53