Pirates of the Caribbean 5 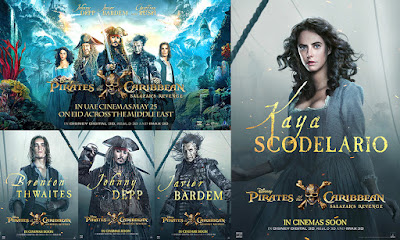 Okay then. So here we are again with another continuation of a tired and bloated series of Hollywoodland franchise pictures which we all really needed in our lives. This one’s called Dead Men Tell No Tales in the US but, over here in the UK and a lot of other European countries, from what I can tell, it’s called Salazar’s Revenge. I don’t know why the name change but it’s been speculated that the phrase ‘Dead Men Tell No Tales’ is harder to secure exclusive copyright on in certain countries so... there you go.

The first ten minutes of the very first Pirates Of The Caribbean movie, The Curse Of The Black Pearl, when I saw it first in the cinema, was pretty dull. I remember sitting there and contemplating how much longer I would have to endure the running time. Then Johnny Depp, an actor I already liked in a lot of stuff but who had never really made it into the main stream (until that film secured him that honour) had his big entrance and I was smiling and laughing throughout the rest of that first movie. It was a fantastic trip. However, the three sequels Dead Man’s Chest, At Worlds End and On Stranger Tides (reviewed by me here) were all pretty much terrible and it was a shame to see a film series deliver none of the things that made the first so memorable and much loved in the first place (which is exactly the same way I feel about the Transformers franchise, by the way). However, I thought I'd take a peak at this new one, whichever title you want to call it, because there’s always a chance that a different director might give the film a much needed kick and get it back to something like its early days. Alas, that’s not the case with Salazar’s Revenge/Dead Men Tell No Tales.

That being said, I think the film is certainly better than the last three sequels and there are some nice moments in it.

The first half to three quarters of an hour are actually pretty watchable, for the most part. Following on from a bit of back story which takes place sometime between the third movie and this fifth one, we jump nine years to the current timeline and witness the exploits of Will Turner’s (Orlando Bloom) son Henry, played by Brenton Thwaites (who was so good in the much underrated Gods Of Egypt - reviewed here) and Kaya Scodelario, who plays a character related to another regular in the series and, I won’t spoil it here by saying who but you’ll probably figure it all out in the first half an hour of the film anyway, to be honest. These two share a joint quest, for different reasons, to find the ‘Trident of Neptune’. They are ‘joined’ by Jack Sparrow who will need to get his hands on the trident if he’s to fend of the ‘revenge’ of the spanish pirate hunter Salazar (played by Javier Bardem) who, with his crew, were tricked into a fate worse than death by Jack in his youth and who are all ghost creatures not able to set foot on land. We also have Geoffrey Rush reprising his role as Barbosa and a few other regulars like the always watchable Kevin McNally along for the ride.

The film starts off well, as I said, with various characters being pursued for different reasons and there’s a nice sequence following the ‘all too obvious’ first appearance of Johnny Depp’s iconic Jack Sparrow character which involves a moving building being chased through the streets and involving lots of nice stunts and ‘almost funny’ moments. There’s a similarly nice sequence, after a brief cameo by Paul McCartney who you also hear performing a quick rendition of The Beatles version of Maggie May, which brings all three lead characters together and features a very nice but overplayed visual gag with a revolving guillotine.

After that it’s business as usual and, unfortunately, there’s the inevitable, threadbare supernatural shenanigans involving some nice zombie sharks and lots of elements too quick to follow, possibly because the visual logic of what’s happening in some sequences doesn’t always match the actual internal logic of the plot line (something which I think plagued all the films in this franchise on some level)... and lots of shouting and fighting. The film rapidly deteriorates, in my opinion, about halfway through and I can never quite figure out why the characters who are the allies in the Pirates Of The Caribbean films are never realising that fact until it’s almost too late and are quite happy to hold each other captive or sacrifice one another until the end scenario.

There are a few nice comic moments like the ‘horologist’ scene... which I’d already seen as an internet preview sometime last year and... um... I’m sure there must have been some other moments which made me crack a smile at some point. Not very memorable ones, obviously, or I would be able to relate them here. For the most part though... and this is common with all of the Pirates Of The Caribbean sequels... the humour falls flat most of the time. I feel if they could write some better one liners and jokes in these things and maybe strip out some of the many and varied supernatural elements and streamline these things so they didn’t need so many special effects... they might be a lot better, more watchable films. And once again, Johnny Depp’s Jack Sparrow is hardly ever pro-active and mostly tends to just have stuff happen to him before being rescued by a bizarre twist of fate every time... which gets kind of wearing after a while. This character could be so better written... especially when you have an acting genius like Depp in the role. Such a shame.

I was primarily in the cinema to listen to the music, however. I, like many, loved Klaus Badelt’s original score, with the pirate theme which seemed to be cribbed somewhat from one of Hans Zimmer’s themes in the Gladiator score. Zimmer produced the first score and composed the next three, only referencing that pirate theme barely in the third and fourth films... but he at least kept the orchestration and ‘feel’ of those sequels in the same melodic soundscape as the first film. That’s an important element that many big budget studio franchises seem to foolishly undervalue and dispense with, it seems to me, throwing away the musical identity of their franchise and diluting it in the most terrible way. Franchises like the Alien films, the current Marvel Cinematic Universe and the Resident Evil series are all guilty of this and it really is noticeable and jarring, from film to film, when they don’t follow through on the musical content. For this one, we have composer Geoff Zanelli and I’m thankful to say that he seems more than happy to maintain exactly the same sound from the previous films and he’s also not afraid to quote Badelt and Zimmer’s themes in large dollops for the good of the score and the franchise. So the one thing this film really gets right, I’m glad to say, is the music. Well done to Zanelli for sorting that out so well and I look forward to hearing the results away from the movie on CD at some point in the very near future.

And there you go... I’m done with this franchise now, I suspect. A major, recurring character of the series dies although, I’m not going to tell you which one and the death of this character is much more moving than you might expect if I named the person involved. That being said, while this is billed as the ‘final’ film in the series, I might remind everyone that this is exactly how they marketed the third one too... so stay after the end credits of this one if you want to see where a possible sequel might go. Although, given the two actors involved in this last, 'after credits stinger', I suspect we definitely won’t be seeing these two return to the series anymore. Pirates Of The Caribbean: Salazar’s Revenge/Dead Men Tell No Tales is probably going to be well liked for anybody who loved the three sequels to the original movie, for sure. People who are tired of these big Hollywood, summer tent pole movies, however, might be best served staying away and trying something else out instead. This film is not terrible but... it’s certainly not great, either.
Posted by NUTS4R2 at 18:58