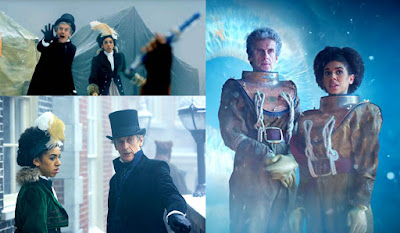 Thin Ice, the third episode of Series Ten (of the new Doctor Who’s... not counting the many series of serials before the show was resurrected and regenerated) is another corker and, as it’s an almost totally stand alone story, this is probably going to be another fairly short review so... my apologies.

Carrying on from last week’s exciting installment Smile, reviewed here, The Doctor and Bill find themselves, by a strange coincidence, at the last great frost fair in London 1814. Frost fairs were held on the ice when the Thames froze over and I say this is a strange coincidence because, last week, a special friend from foreign shores came to visit me and on one of the days we spent together we pitched up by the side of the Thames for a tour of The Globe Theatre and, while we were in the museum at The Globe, we saw a model of the Frost Fair there.

Anyway, The Doctor and Bill find themselves at the Frost Fair and, in typical Doctor Who fashion, it doesn’t take them very long to discover a death dealing mystery emerging from beneath the ice. What are the strange lights that are targeting and carrying people to their doom and how are some particularly nasty specimens of the human race profiting from this? It’s up to our heroes to find out and they do so with less action and more talking, it has to be said, than usual. But that’s okay.

This one is very much a character piece and the writer uses it to explore the growing relationship between Bill and The Doctor as Bill struggles to come to terms with The Doctor’s seemingly cold, almost indifference to the death of a child and comes to realise that, while The Doctor always cares, moving on quickly and getting on with the job in hand is always the right decision if you want to save more lives. This is where Bill realises that, not only has The Doctor faced death on too many occasions to count, he has also had to kill people... on too many occasions to count. This episode explores how she reacts to that and how she comes to understand the necessity and compassion of The Doctor’s actions.

Now, there was one scene here which rang a little alarmingly wrong with me and it was the punchline, literally, to a joke set up where The Doctor tells Bill to hold her tongue and not react with passion to anything the lead villain says because it will stop the flow of information they need to figure out just what is going on. He then, on encountering the racist overtones of bad guy and the instant hatred of The Doctor’s new companion, straight away punches the guy and knocks him over. Now... good for him but it’s entirely out of character, it seems to me, for The Doctor to go around using physical force on somebody (even if he was the more physical Jon Pertwee incarnation, he wouldn't have thrown a first punch). So I’m really not sure what’s going on here.

Other than this slight mis-step though, the episode is a nice one with some nice scenes involving old time diving equipment, some nice speeches about the value of a life and a number of jokes as The Doctor and Bill get into some banter at various points in the, admittedly, very simple story. There are also some interesting comments about the way in which time can be changed by accident and how, sometimes, it’s best not to worry about such things... which I thought was pretty neat. Although, there’s a sequence where the villain is running along the ice and Murray Gold’s musical sub theme action music for this incarnation of The Doctor is needle dropped into the score... which made no sense to me in terms of leitmotif and I have to wonder what was going on there, to be honest. It seemed to be completely out of place and, also, out of character for Murray because he’s done such deft and magical work on the scoring of other episodes... if, indeed, he was even involved in the decision of tracking that music in there in the first place.

At the end of the episode, which doesn’t seem to go into the next one along as I’d expected it would, we have a little more talk between Matt Lucas’ character Nardole and The Doctor about the contents of the vault The Doctor is supposed to be guarding and, also, some knocking coming from the vault with Nardole talking to what/whoever is behind the door. Could it be The Doctor himself locked within? Well, I’m liking that theory less now since Nardole has a line which almost specifically points the finger at a version of The Doctor being within the vault... so I’m guessing it probably won’t be him then. Perhaps, then, it’s something or someone which is Bill herself, in some other form? I don’t know and, for the moment, I’m not remotely interested until we get to the last few episodes. I am, however, looking forward to next week’s installment because it looks like we are getting into a haunted house story and, as you may or may not know, I love the spooky ones. Hopefully it’s as consistently as good as the first three episodes of this series have been. Time, and space, will tell.
Posted by NUTS4R2 at 10:19