Guardians Of The Galaxy Vol. 2 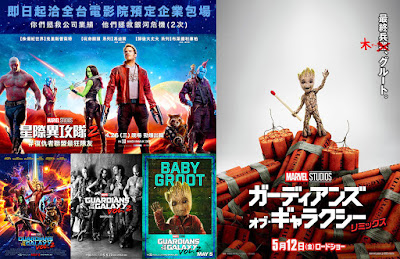 The Groot, The Bad
And The Ugly

And so I come to one of the Marvel movies of the Marvel Cinematic Universe’s (MCU) that I’d been looking forward to the least... Guardians Of The Galaxy Vol. 2. I’d been wary of this one because the first of the GOTG movies (reviewed by me here) was one which, although I found it mildly entertaining and, perhaps, gave it a better review than it deserved... I was mostly unimpressed by.

It’s been widely said already that this new volume in the series is either better than the first movie or at least as good as that one. I’d have to say that now I’ve seen this second outing, neither of these popular sentiments are something I would agree with. The second movie is at least consistent with the previous, though, in that it both fails and triumphs in the same areas as the first... for this viewer anyway.

Okay, the negative stuff. Action for the sake of action can be dull and mind numbing and this pretty much sums up a fair amount of my cinema experience with this one. Even though the movie was big and loud and dumb enough to be the kind of joyful Hollywood popcorn fodder I would hope for, this was a film in which I consistently found myself nodding off for a few seconds here and there, especially during the convoluted action sequences in the second half, which were edited in such a way that I couldn’t really work out what the heck was going on for a lot of the time anyway.

Perhaps one of the problems was that it felt like nothing was at stake. Even with a high stakes sacrifice towards the end of the movie (no, I’m not going to put any spoilers in here by elaborating on that statement), it felt kind of lifeless and ultimately like it was really not addling much to the current Marvel Cinematic Universe movies we’ve seen thus far. The director has gone on record saying that it’s a stand-alone piece and this does, at least on the surface, seem to be the case here. So you really don’t need to see this one to make sense of any of the MCU movies which are about to be unleashed on us... although there is at least one or two characters who would be unfamiliar or, in one instance, unexpected in their inclusion of future films if these characters are, as I suspect, making appearances in the forthcoming Avengers: Infinity War movie for 2018.

So yeah... for me this movie was noisy enough to keep me awake some of the time but, alas, dull and dreary enough for it not to succeed at that for any great length of time.

All that being said, there’s also some nice stuff happening in this movie too...

The regular Guardians cast... Chris Pratt as Starlord, Zoe Saldana as Gamora, Dave Bautista as Drax, Vin Diesel as Baby Groot, Bradley Cooper as Rocket Racoon, Michael Rooker as Yondu and Amy Pond herself, Karen Gillan, as Nebula... are all as solid as you would expect them to be and they are joined by such great actors as Pom Klementieff as Mantis and some old timer superstars such as Kurt Russel, Michelle Yeoh and Silvester Stallone. There’s some lovely stuff with a ‘younged up’ Kurt Russel set prior to the opening of the last movie which I can only assume is CGI and the character chemistry and development is, mostly, as good as it was on the first film... one of the strengths of the franchise, as far as I’m concerned. This meant, however, that as much as I enjoyed Bautista’s portrayal of Drax... he felt a little bit over-the -top and forced into his new role in some ways. Still pretty funny though, so there’s that.

And there were some great moments with characters from other bits of the Marvel Universe referred to or mostly unexplored getting a look in here. A character from the first movie which was a big surprise in the last one has another little moment here. There’s also a reference to a Christ-like Marvel figure who looks like he will at least appear in Guardians of the Galaxy Vol. 3 and Stan Lee continues his cameo against a creature (or creatures) who, similarly, also got his/their debut in the pages of Fantastic Four and this is all very nice. About that cameo... Stan has two sequences in this film and there are also, if you are interested, five post credits scenes in this one... which play out at regular intervals throughout the cast and crew shout outs. And absolutely none of them seem to have any relation to other movies upcoming in the MCU other than the creation of a certain person coming for Vol 3... who is mentioned by one name only. Also, about that Stan Lee cameo... it’s pretty cool because it references at least one other Stan Lee cameo and does so in a context where the seemingly random (as they were originally conceived) Stan Lee cameos can now be part of a single character cameoing at different points through Marvel history so... yeah, that was quite cool.

Ultimately though, as I said before, this wasn’t interesting enough of a movie to keep me from falling asleep for a few seconds at a time and it certainly, in my humble opinion, wasn’t as entertaining or as vastly ‘Universe trotting’ as the first installment. That being said, the audience I saw it with were certainly getting a kick out of it (kids dancing in the aisles to the end title sections) and if you were a big fan of the original movie then you are almost certainly going to love this one. Not a film I’d recommend to anyone else but, if you liked the original Guardians Of The Galaxy, then this is kind of a necessary watch, for you.
Posted by NUTS4R2 at 18:57