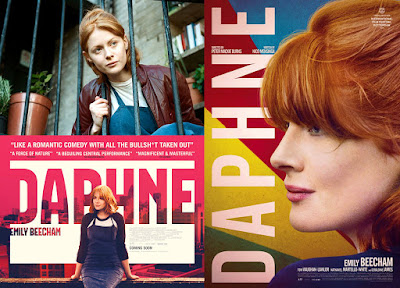 Gift Of The Stab

Wow. I didn’t know about this movie until literally, the day before I went to see it. I was going to have to go into London anyway and I saw the BFI tweet about a new film which wasn’t playing at my local so I decided to take a look at the trailer online. What can I say? Sometimes I just get really lucky.

Daphne is one of those minor masterpieces of cinema which totally utilises the art form to give you something which really shows what the medium can achieve. I’ve talked about certain films being what cinema is all about before and I might cite such films as Amelie and The Big Lebowski as great works of art that give you a sense of pure cinema and, like those films, it can sometimes be the fabrication of a larger than life spectacle that you can’t see anywhere else which qualifies it. Sometimes, though, it’s the smaller, more intimate works of the art form which deliver equally valid and awe inspiring moments and films like, say, Educating Rita, Mike Leigh’s Naked and I, Daniel Blake (reviewed here) are just such films. Well you can add Daphne to that list because this one’s a real corker.

The film does not have a story as such (something which my regular readers will know I applaud) and it’s more a character piece with an actress called Emily Beecham giving a truly blisteringly good performance as Daphne, a chef who has a fair few cynical quirks of character and who you really care about by the end of the movie. I mean, everyone in this movie is great, including Tom Vaughan-Lawlor as Joe, her kindred spirit boss, Nathaniel Martello-White as potential dating material David and Gerladine James as Rita, her mother who is quite probably dying of cancer.

It’s Beecham, though, who gives an absolutely stand out performance in this one as the film focuses on, to be honest, a character who has not accomplished much with her life and who is just trying to survive each day... filling her evenings and weekends with various drinking and sexual shenanigans with men who mean nothing to her and generally just trying to keep on top of her situation. And the totally naturalistic style of her acting is truly convincing . You can almost read the character’s silent thought processes on her brain as Beecham breathes so much life into this role with her facial expressions and body language that you are just rooting for her all the way through.

Then, fairly early on in the film, she witnesses a stabbing up close and personal and, from then on, her thinking seems to deteriorate a little as she processes the incident that took place and tries to make some kind of emotional sense of it. This is when the cracks start to appear in her cynical, earthy facade and the audience starts to worry about just where all this is going. Well, I did anyway.

And the final solution to things are... almost but not quite, nowhere to be found on screen. This isn’t a movie that builds its way up to any real sense of closure to events. Instead, this is an observation piece about Daphne and the way she deals with life and, frankly, I found the movie almost jaw dropping in its intensity and beauty.

It’s not just performance alone, however, that keeps you watching this (although it’s a pretty fiercely awesome performance, to be sure). It’s the way the director chooses how he shows things which also make this amazingly interesting. He obviously likes vertical patterns and comes back to compositions which utilise these time and again. One of my favourites was when Daphne goes into a shop at night and we look at the shop in long shot from across the road but we have one of those big bus stop standing adverts in the foreground, filling up the entire left hand of the shot. However, we can’t actually see the advert in the display stand because of the way the street is lit. Instead, we have the exact opposite of the right hand side of the screen behind the advert reflected in the glass of the board housing the ad. It’s a great little moment in a film which is filled with interesting compositions.

The proximity of the camera to the central character in that shot is something which is common to the film too. Quite often the director will cut to a long shot and this gives the film a very voyeuristic feel to quite a lot of it, giving an extra weight to the ‘fly on the wall’ method of catching the characters in conversation that feels like a running element of the film. There are lots of shots taken from overhead, for example, like Alfred Hitchcock would often use in his films to give a bit of an overview of the characters in a kind of, almost detached manner. The audience members become observers complicit in the eavesdropping of this person as she goes about her daily routines. Yes, I know that sentence could apply to most of cinema history in a way but the means by which this director expresses these performances visually seems to heighten that sense of casual observation more overtly than a lot of other movie makers out there at the moment, I think.

He does a lot of things with the camera in this which you wouldn’t normally expect to see in a film and, especially with the kind of modern ‘ultra kitchen sink’ style of content that you get in works of this nature. For instance, there’s a brilliant shot of Daphne in head and shoulders walking towards the right of shot with her face in profile always at the centre of the shot and we see the fence behind her whizzing behind from right to left. It’s a little like that shot which opens up the credit sequence on Tarantino’s Jackie Brown and, for a minute, I had to wonder if the actress had some kind of body cam strapped to her like earlier incarnations of directors Martin Scorcese or Darren Aronofsky might have used. Or was it just a bloody good cameraman who was able to keep up with the subject brilliantly (I suspect so).

Another striking shot which doesn’t make much sense is where Daphne is in a glass building and walking from the back of the screen towards two glass doors at the foreground of the camera. As we cut to a closer up version of the shot, Daphne gets more and more out of focus until she leaves the shot and the camera finally decides to go into deep focus, on the empty environment where she had just been. It’s almost as unusual as the shot of Daphne and David on their ‘first date’ where they are siting in a restaurant or pub behind a glass window... the glass window is completely steamed up and it stands between the camera and its subject so we can only make out the rough shapes of the lead characters without actually seeing them. The only thing in focus throughout the whole sequence is the condensation caused by Daphne’s finger as she draws a huge penis on the window.

The film is a real milestone, at least with this particular audience member and, although it does have a certain sense of an ending in some way, where Daphne reconnects with a specific element of her traumatic confrontation in the earlier part of the movie, it certainly didn’t go anywhere that I thought it would go and the ending came as a complete surprise because I though we were going to get another twenty or so minutes as the character decides to get certain elements of her life back on track and, instead, the film finished and the credits started to roll. However, I didn’t in the end feel I really needed any more ‘closure’ to Daphne’s plight and it was like we were visiting with a character and keeping an eye on her up until the point where she might... just might... be about to turn her life around and start taking an interest in making the right decisions for her personal well being. And I loved it. The film is truly wonderful.

And that’s all I have to say on this one. If you want to see an amazingly jaw dropping central performance coupled with some truly striking compositions and mise en scène then you need to get yourself to see Daphne. In short, if you call yourself an admirer of the art form that is the moving picture, you would be seriously doing yourself a disservice, actually, if you didn’t check this one out. I know I count myself really lucky that I saw that BFI tweet in time. I just hope they release a Blu Ray of this one soon.
Posted by NUTS4R2 at 18:05