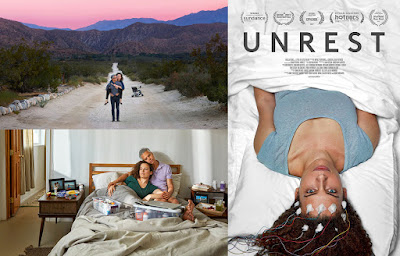 The only reason I even know about this new documentary movie is because of one of my favourite composers, Bear McCreary. La La Land records were offering signed copies of his score to a new movie I’ve not seen called Rebel In The Rye and, if you ordered this you also got a free signed copy of his score for Unrest, which I don’t think is available to buy in this format other than if you took advantage of this offer (although I think it might be available digitally, if you are interested in downloads). So a big thank you, somewhat indirectly, to Bear for making me aware of the existence of a film about a condition that I first heard of around a decade ago... because it’s an important thing people should be aware of.

Now, you may be wondering why I haven’t got one of my usual pun titles to kick off this review. Well, believe me, I thought of a few possibles for this one but then, in a mad rush of completely ‘out of character’ thinking... I decided that I didn’t want to make light of a film which is dealing with such an important subject. Believe me, I am not one of ‘those’ kinds of people who think that there are subjects that are not right to make jokes about... everything, as far as I am concerned, is fair game in this context and I think that there are a few reasons why this should be so. However, in the case of this one, I just didn’t want to. It’s not a case of I thought it was particularly wrong to see it in lighter terms... it’s just not something I personally want to do because the stakes need raising on this and I don’t want you to be here reading this if you just happened to like a pun.

Unrest is a documentary written and directed by Jennifer Brea, who suffers quite traumatically, as do many people, with ME aka Myalgic Encephalomyelitis aka Chronic Fatigue Syndrome. It’s an illness which totally doesn’t exist for many people except... yeah, it really does and you should start taking this seriously because, frankly, it could happen to you and, who knows, the whole human race someday. I first came across this disease because a friend’s husband suffers from the condition. I heard about it through her and then, in my daily life on Twitter, I came across more people with this problem, the symptoms of which are not entirely different to MS, from what I’ve seen. Except it’s quite different and can be even more debilitating to some sufferers, in actual fact... both of these conditions need to be taken very seriously but, at the moment, I believe there’s more funding given to MS because... you know... MS exists and ME doesn’t, right? Wrong!.

Before I say anything further about the film, I just want to relate a short, personal story which really made me realise something about the way people accept the reality of a situation... something which is related to a lot of things in life (especially Mental Health) and which, in my case, will probably seem quite trivial but which I think is a real problem in terms of the way people perceive and believe information. And it’s this... about six months after I first started my full-time job, around 24 years ago, I suffered badly from RSI (repetitive strain injury). Most people didn’t believe in it and it wasn’t until I was sent to an occupational therapist that they realised that, not only was I not faking it, I was actually in quite bad shape. I couldn’t even hold a book open to read and sometimes struggled to hold cutlery for a little while. Luckily, the people at work funded me to treat the problem and, so far, I’ve managed to keep it at bay ever since. It’s never really bothered me again in around 20 years apart from a slight twinge, very rarely. I kinda beat it.

The thing is... people don’t really believe in RSI and... neither did I. Which is the relevant thing here.

I thought it was just a flimsy, psychosomatic condition... until I actually got it for myself. My take away from this was... you don’t necessarily believe in a thing until you’ve experienced the issue first hand. Everybody has had a cold or a stomach ache or a headache so they can empathise and believe in the problem. Not everybody has experienced this kind of thing personally, though... and so there’s always some doubt for a large percentage of the world's population.

And, similarly, I think that’s probably one of the biggest problems with CFS (chronic fatigue syndrome)... people just can’t relate to it because everybody can get up out of bed and walk around and so on if they want to, right? Again... wrong.

In this movie, Brea documents, quite unflinchingly and bravely at times, the plight of not having enough energy to even get out of bed for days on end. From her bed, she has conducted interviews with a number of sufferers and, also, the people they rely on, via Skype and social media. What she portrays is an accurate vision of people who are literally 'crashing' because they don’t have the energy to even roll out of bed. Some can’t handle daylight and if, as in the case of the director, they stretch themselves too hard for a very tiny period of time... the consequences are crippling pain and immobility for quite a while. These people see their lives taken from them and, so far, there’s nothing much which can be done about it. And one of the reasons for this is because it’s so hard to get a doctor to make that diagnosis. There’s a certain stigma which seems to have attached itself to it and, as I wasn’t aware of until I saw this documentary... that’s not the worst of it.

I knew about the suicide rate of suffers being high with this and I also knew about the victims of this ravaging condition losing their friends and life partners because of the heavy toll the debilitating effects of this illness has on their companions. In fact, one of the things which the attention these kinds of illnesses sometimes attract is the absence, often, of the effects that this illness is having on the people who are looking after the patients. The burden of responsibility and pressure takes its toll on those on the periphery of the illness too but, Brea’s documentary is a well thought out piece and it also touches a little, especially in terms of her husband, on the weight it has on the people who don’t have the condition but who are living with it indirectly.

However, like I said, this is also stuff I knew about and this... isn’t... all of the story.

I discovered, solely through this film, that people in places like Denmark are being forcibly taken from their homes, sometimes at gunpoint... and sometimes are never allowed to see their family again. In the name of mental health. Seriously, there is some really bad, evil stuff going on out there where government agencies (pretty much, by the looks of it) are taking a hard line at controlling the perception of this condition and dismissing it as anything other than a mental health issue. And a quick google of this phenomenon this morning revealed to me that this shocking news is possibly just the tip of the iceberg and that there are similar things going on in other countries (hello England, America and everyone else... time to wake up and smell the coffee!).

Jennifer Brea’s documentary is sometimes light in tone (such as the sequence in which she tries out various homespun ‘miracle cures’ from around the world wide web) but ultimately, this is a very hard hitting piece of filmmaking which is exactly what it needs to be because people need to start putting pressure on various government institutions to recognise this condition for what it is... something which isn’t ‘in people’s heads’, so to speak, is completely crippling in the kind of ‘Night of the Living Dead’ zombified existence which it induces and something which needs some money pumping into it before the problem get worse (and possibly more wide scale?).

Oh... and as for the element that actually got me there?

The soundtrack turned up in the post and I went on to see if the accompanying movie had any kind of UK release date, expecting it wouldn’t have one. Serendipity struck and I found out that the same week that the score arrived through my letterbox, the film had a few limited screenings in London. So I got lucky and I’m here to tell you something which I merely had to confirm... Bear McCreary’s score is excellent. Never going so far as to ‘musically advise’ you on the tone of the images to the extent where it is spelling things out but nicely appropriate to the subject it is supporting and, as you’d probably expect from an artist like McCreary... a great stand-alone listen, too.

So... Jennifer Brea’s Unrest is a vital piece of cinema. People’s awareness of this subject needs raising and this film, if it’s seen by enough people, may help to do just that. It’s a great piece of work and hats off to Brea for even finding the energy required to put this together, considering most days she is bed ridden. Much recommended by me if you can catch it (I believe it will be available through the normal download channels in a couple of weeks) and I strongly suggest you do so and educate yourself about this. You never know... it could happen to you.

If you want to know more about both the film and how you can help those with this condition, please hit this link to the Unrest movie official homepage https://www.unrest.film/ where, at the very least, you can learn a bit more about how things are and why people should be more concerned. And if you want to see a movie which has obviously been made with great pain and an amazing amount of determination, please check out Unrest.
Posted by NUTS4R2 at 12:46