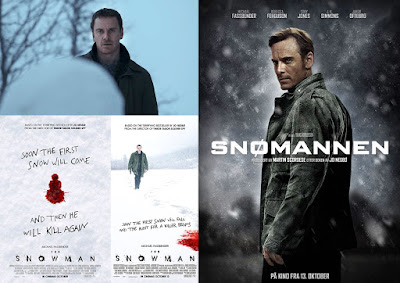 We’re Stalking In The Air...

The Snowman is set and shot in Norway... being, in some ways, an example of what is popularly becoming known as Nordic Noir. It’s based on a novel by Norweigan writer Jo Nesbø and I saw another, quite good movie based on a novel by him a few years back called Headhunters (reviewed here). This one... well it’s not so good, to be honest... although it does have a nice visual quirk that makes it kinda interesting at times. The trailer was pretty good, however (better than the film and I’ll come back to the trailer) and, since the movie stars the always brilliant Michael Fassbender, this was one of the movies I was looking forward to seeing this winter.

That being said, I’ve read or heard of reviews which have been tearing this to pieces, saying that the movie is incoherent and makes no sense. Well, that one I can certainly put to rest and say that, yes, the movie is certainly coherent and, yes, it makes complete sense... to the point where the identity of the killer might be fairly obvious to the audience, alas. However, to some of the more ‘high profile’ newspaper reviewers of this film I would say that they should maybe concentrate more on what is said when people open their mouths to talk as, you know, the storyline and connections made in this really aren’t rocket science. Or, you know, familiarise yourself with the language of cinema by maybe going out and watching more films... if you really are finding this stuff confusing.

However, what this film does suffer from, I would say, is a lack of on-screen content to allow for the more leisurely pacing that the director brings to this. I’ll get back to that in a minute but I’ll talk about some of the positive things in this first.

The number one positive is the acting in this is all nicely done. Not many duds here. Fassbender’s portrayal of Nesbø regular Harry Hole is pretty great and even though not everything is spelled out for us, we get a real sense that there’s an interesting history to this character (this is a number of books into the series, apparently, so I’m sure there certainly is). The character is pretty much on the rocks, drinking and trying to cope with, at the very least, being dumped by his girlfriend but still maintaining a friendship with her son and also, to an extent, with the son’s ‘new dad’. The way Fassbender plays him shows everything with his body language... you get the feeling that this man is completely out of shape but that he once used to be a brilliant detective and his previous career is briefly alluded to by his new partner, played pretty nicely by Rebecca Ferguson. They’re both ably backed up by an incredible bunch of actors including Chloë Sevigny, Val Kilmer (playing someone who you totally wouldn’t expect Val Kilmer to be playing and making it very different to some of his other work), J. K. Simmons (ditto, he’s certainly not typecasting himself here), Toby Jones and the always utterly compelling Charlotte Gainsbourg as Harry’s friendly ex-girlfriend Rakel.

And the story beats are good too. Once you get into the idea that the scenes with Val Kilmer are flashbacks and slowly start to sew them together in your head with the case Harry is working on, the more sense they make. I did not see the relationship between Kilmer and one of the characters in the modern timeline until it was pretty much revealed, so that’s a good thing. However, this also leads me onto some of the bad stuff like... no matter how stupidly coincidental all of the puzzle pieces are when they fit together, the unlikeliness of them does not detract you from being able to spot the killer a good long while before that identity is made known. So that’s not so good.

Another bad thing is that, when we have the final denouement between Harry and the killer, Harry is competely powerless to do anything much and the demise of said killer is competely coincidental. A serendipitous moment which seems really stupid... ironically poetic given the film’s pre-credit sequence, sure but... yeah, it’s not the smartest ending it could have had. It probably works much better, I suspect, in a novel than it does for an audience when confronted with the irony in a visual manner but, there you go.

Back to my thing about pacing versus content. Yeah, it feels like the film is being rushed and severely edited. For such languid pacing I would have expected something more like a three hour film which takes its time to build up more depth to the characters and the causes of the story they find themselves in. This seems a bit choppy and... this kinda makes sense actually, in terms of the end result. It wasn’t until I was leaving the cinema that I realised that there were a lot more things happening in the trailer than you actually see in the final release print of the movie. So... I might be wrong here but... I suspect the studio shortened it to tighten it somehow when, quite possibly, it would have worked much better as a longer piece. I obviously can’t ever do more than guess at that one but... that’s my very best guess.

One of them being the director's seeming visual obsession of people looking at things through windows. Most of the characters seem to be constantly putting themselves in situations where they are either outside and showing the audience what’s going on from looking in through a window into a scene or, the reverse... where something’s going on outside and the audience are looking at a character looking outside the window. It’s a really bizarre thing because I’ve not noticed anyone doing this kind of thing quite so often in a movie before and it became fairly amusing waiting for the next ‘through the glass’ shot to pop up.

Also, the murders themselves are quite inventively grizzly. They mostly involve people being cut up into pieces with decapitation clearly a favourite of the killer. The antagonist’s trademark is to build a snowman nearby and, quite often he will either leave a snowman’s head in the bloody neck stump of his victim or, vice versa, plop the victims head onto the body of one of his snowmen. So some interestingly gruesome visuals in this thing, for sure, although the director plumps to not focus on them for very long. There’s a nice moment when someone’s head is blown clean off with a shotgun, too, which is not telegraphed in any fashion and comes as a surprise. So some interesting artistic decisions made around violence and its aftermath in this film, I would say.

And finally we have  Marco Beltrami’s excellent score which nicely captures the languid pacing in the way Harry Hole proceeds about his daily life. It kinda sounds like a spy movie score from the mid to late 1970s in its tone at some points. Not as strident or highly stylised as, say, a John Barry score from that era and more like the kind of ‘softer but definitely a distant cousin’ of that kind of cold war music that you were getting a decade later. It’s a good one and I’m pleased that the score is scheduled to get a proper CD release later in the month. Looking forward to giving this one a few spins away from the movie.

So there you have it. The Snowman is not the terrible movie that some of the critics have been saying, I think but... it is quite disappointing in that it’s not a great movie either. Fassbender and Gainsbourg are absolutely marvellous in these characters and I’d like to see them both return to play them again. Alas, I suspect the box office on this one won’t be so great either so I suspect that’s not a prospect I can look forward to in the near future. This one isn’t essential viewing but it’s okay if there’s nothing else on at your local that you want to see. Maybe give it a go.
Posted by NUTS4R2 at 10:20