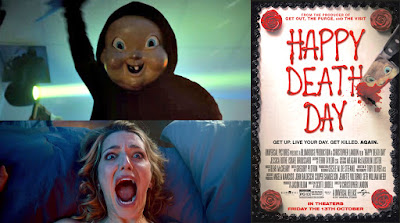 Warning: Very mild spoilers to do with the structure of the movie.

Happy Death Day was the first of a cinematic double bill I treated myself to on Saturday... both showing at different cinemas... to feature a score by one of my favourite contemporary composers, Bear McCreary (the second of the two I saw was a pretty important movie called Unrest... and you can read my review of that one here). I hadn’t seen a trailer for this one but, what little I had heard of it would maybe have drawn me towards it by itself... with McCreary’s name attached to it, though, it was something I didn’t want to miss. As it turns out... and much to my surprise, it’s a really cool little thriller.

The film starts off with University student Tree, played really well by Jessica Rothe, as she wakes up in another student’s dormitory room on a different part of the campus. The other student is called Carter (played by Israel Broussard) and he is Tree’s companion, kinda, when things start happening later although, as of that morning, this is the worst situation she wants to be in. And then we see this absolute brat of a student return to her absolutely (for the most part) bratty friends and go through her day, which also happens to be her Birthday and then... as the night wears on... she gets killed by someone wearing a baby mask. And, frankly, I hated the character so much at this point that I was glad that she got killed. The end... except...

The film restarts off with University student Tree as she wakes up in another student’s room on a different part of the campus. What the?

Oh yes... this is basically a remake of Groundhog Day... or at least a movie which totally ‘borrows’ the central premise and transformation of the main character. Tree keeps living through the same day over and over again and, although she changes things, learning from experience each day to take a new approach to the problem at hand, she still manages to get killed each repeated cycle, only to find herself waking up in Carter’s bedroom at the start of the same day again. And, I have to say, it’s a really neat little film because the script is quite well put together and the acting is superb, especially from the main protagonist. In fact, Jessica Rothe, just like Bill Murray’s character in the aforementioned Groundhog Day, convincingly changes for the better as she relives each day, trying to find out the identity of the killer who is ending her life so she can maybe, somehow, break the cycle by surviving and making it through to the next day. Some of the teenage dialogue is a bit repellent at times but I think that’s kinda the point and, by the end of the film, I was certainly rooting for Tree to survive and find out who the killer was. Taking of which...

The identity of the killer is actually something I guessed very early on in the movie. There’s even a big visual clue about two thirds of the way through which, having now watched the trailer retrospectively on YouTube, I’m amazed to find they have even put into the advertising campaign. That being said, I didn’t feel too upset about figuring out who the killer was because, the genius of this thing is that they do something to change your mind about who it is later on, in a fairly long protracted sequence which made me assume I’d been dead wrong all along. In fact, there’s a wonderful sequence near the end of the movie where you think everything is done and dusted and the credits are about to roll and then... the character wakes up with the same day to relive yet again. The big question is why and, when she figures out the answer, the killer is revealed and... okay, so it turned out to be who I thought it was all the way through but I had such fun getting there that I actually didn’t mind.

And it really is a hoot. The idea that the character runs with to find the identity of her killer by sticking close to a different suspect each repeated day to see if she gets killed by someone else is a nice idea and, just as you get used to this, a new crimp in the ‘rules of the game’ is revealed when Tree spends some time in hospital and a new ‘time sensitive’ twist is added into the mix. It’s a good idea to do this too because the film does need some variation to the plot line at some point. Like Groundhog Day, the writer and director put lots of memorable, eye catching moments in the course of Tree’s day to day so she can revisit these little anchor points to help the audience navigate where they are in that time period. Also like Groundhog Day, most of those moments are front loaded to the first part of the day because, each time Tree changes things, she strays from the events of the previous cycle to the point that later stuff doesn't happen for her... apart form her inevitable demise. There’s even a nice, brilliant touch when a reoccurring phenomenon which happens each day is actually used by Tree to give her a tactical advantage over someone who is trying to kill her at one point. I’d been wondering why a certain thing was happening with no story relevance until a specific scene later in the film where the punchline to this particular moment is suddenly thrown into the mix in a pretty cool way. I should have seen that one coming, to be honest but... I didn't so, moving on...

Visually the film is more than competent and, although there are a few little stretches where you’re more or less seeing the same things play out in front of Tree, the film handles the mechanics of the situation (which are never explained, of course) in a visually interesting way. This starts even before the movie and while we’re still on the Universal logo (which is not the Universal logo opening you are expecting) and there’s lots of nice ways of showing the repeats in variations which never get boring. There’s a beautiful shot, for instance (and it’s in the trailer) where Tree gets hit over the head and, as she falls to the ground she just gets relocated in time and space mid-shot to land in bed in the dorm room to begin the next repeated cycle. It’s an amazing little moment and it really made me appreciative of the director (which seemed somehow strange when I found out he was responsible for directing the absolute worst of the Paranormal Activity movies, The Marked Ones).

Bear McCreary’s score is also awesome in this and he really gives the film some lift in all the right places. For instance, on the very first day there’s an obvious moment when you know there’s going to be a jump shock coming.... you are totally prepared for it but, because Bear’s musical stinger is so loud and over the top in its ferocity, you end up jumping out of your skin anyway. Without this score on it, I doubt if I would have even breathed irregularly at this moment. As a stand alone listen... I have no idea but I suspect it will be a fun spin when the CD arrives. At least this one has a CD release, so I’m grateful to the studio for allowing this one out on physical media.

The ending of the film is pretty good and you do get the feeling that Tree has grown and learned from her experiences (no matter that certain consequences of her condition are somewhat swept under the carpet by the end) although, it has to be said, having now heard about the original ending this screened with for preview audiences (who weren’t happy about the film’s last ‘twist of the knife’, so to speak), I would have much preferred the director to have kept the original conclusion to the movie. Also, one slight criticism in a near perfect slasher movie is that the montage sequence, where Tree is dying and crossing off another name on her list after each death is... well, that list wouldn’t exist in that form after the first death so you wouldn’t actually see the names being crossed off one after the other as she goes down the list... especially not with the exact same markings on as the previous version. It would just reset itself to a blank piece of paper at the start of the day. So that’s a bit of a silly error, I would say...

But everything else about this is absolutely right. The film is a very light on gore but it makes up for it with a witty script, great performances, great scoring and there’s even a nice bit of post-modern, meta-textual shenanigans as one of the characters likens Tree’s account of her experiences as being like the movie Groundhog Day... which is a good way to get me on your side if your movie is halfway decent but derivative. Wear your inspirational template on your sleeve like this and you have at least made an attempt to not insult the intelligence of the audience. So knowing winks like that really help.

If you are a fan of American slasher movies and you want something slightly different with glossy production values then Happy Death Day is right up your street. I really don’t care for the genre too much unless it’s maybe directed by Brian De Palma (I much prefer the Italian gialli of the late 1960s to mid-1980s for a more stylish and interesting product) but this one really impressed me and I would thoroughly recommend it. Don’t let this one pass you by.
Posted by NUTS4R2 at 19:01