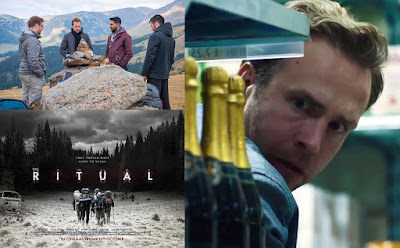 The Ritual is a UK horror movie directed by David Bruckner and based on a novel by Adam Nevill. I’ve not read the book myself but, from what I can see on brief mentions of the plot hook, the whole reason the four friends are going on a hiking trip to Sweden in this movie is either absent in the book or, maybe, a reveal later on. I don’t know which but I expect some major changes have been made... however, it’s clear that I am unqualified to pass any kind of judgement on this in terms of its success as an adaptation so, you know, the usual caveats apply as far as that goes.

As in the trailer, the movie starts off with five friends in a pub but when two of the friends go to an off licence at the request of main protagonist Luke, played here by Rafe Spall, they get into a spot of bother when they accidentally disturb a robbery in progress. Luke hides but is forced to watch his best mate killed while doing nothing himself. 6 months later he and the other three remaining friends of the group, including the annoying Dom played by Sam Troughton (grandson of The Second Doctor, Patrick Troughton) attempt to fulfill what their dead friend Robert (played here by Paul Reid) would have wanted for their annual ‘lads’ trip... a hiking holiday in Sweden. You so know this is going to go wrong... right?

So, yeah, when the weather gets cold the four chums are wanting to get where they’re going on their hike quicker, especially after Dom twists his ankle... so they decide to cut through a big, spooky looking forest and shave some hours off their time. You would think that when they come across a freshly killed animal strung up in a ritualistic pose in a tree, the blood still dripping from its body (I think it was a horse but I’m not 100% certain due to the way the body is arranged), they might want to turn back the way they came but, no, this is a group of lads so the whole thing gets very Blair Witch very quickly... especially when they stumble upon a deserted cabin with strange ritualistic totems and an unnerving atmosphere. When the four awake from some very unusual nightmares, they find themselves strangely compromised and, from then on, everything goes into full-on survival horror mode while they four are whittled down in number as they try to find their way out of the woods before, something, finishes playing with them and killing them off.

And it’s actually very well put together. Maybe not as intensely scary as you might hope but it's certainly very suspenseful in places. The director does some very nice things with the way it’s shot which I really liked. You get the obvious ‘camera looking at the backgrounds of the forest’ so the audience can strain to see whether they can see anything lurking on the peripherals but there’s also some very blatant stuff where he will just point the camera away from the main parts of the shot, into another part of the forest or looking up at the sky and... he will just hold it there and just put these deliberate pauses into the flow of the action. Which is something I thought was quite effective, actually.

Another nice thing that’s done on more than one occasion in the movie is to blend bits of the forest into flashbacks of the main protagonist’s earlier encounter in the newsagent. While there’s certainly a sense that the four friends have had very vivid dreams, you also get a sense that the thing they are up against in this is manipulating their minds while, simultaneously, you get the feeling that Luke’s dead friend Rob is trying to help him survive his experiences from beyond the grave. The director shows this by, as I said, blending the two environments and the people into various bits of the forest, quite unexpectedly, at various points in the narrative. Now I couldn’t work out if this was done as CGI or built practically as sets (it looked good enough that it could have just been created on the sets themselves rather than with ethereal looking computer aided trickery) but it’s very effective and helps give the film another level of surprise to keep you off guard as an audience and thus keep you vulnerable for the next big scary moment... depending on whether you actually felt the film was frightening or not.

So... yeah, there’s also some nicely effective scoring by Ben Lovett which is just the right side of being ‘B-movie over the top’ in places without being too clichéd and with some really relaxing atmospheric textures in it too (alas, there doesn’t seem to be any kind of soundtrack for the release of this one, as yet, which is a shame). And this, coupled with some fine performances from all the actors, a nice reveal on the kinds of people you would expect to meet in the middle of a forest and even a mini King Kong homage (I suspect)... all make for a nicely entertaining, ‘satisfyingly pulpy’ horror movie. However, there is one slightly disappointing thing about the movie and it’s this...

None of the characters are that sympathetic or, honestly, anyone you’d really want to hang out with if they were in your local pub. Especially the main protagonist Luke, who is played brilliantly by Rafe Spall but, he’s not exactly someone who you’d want to get to know. So, all in all, I really didn’t mind if the whole lot of them got killed throughout the course of the movie if I’m being brutally honest and this, for me at any rate, watered down the tension to some extent. You kind of go through the movie expecting Luke to redeem himself and make good on his inaction at the start of the film which ‘possibly’ got his friend killed but, as the story wanders on, although you can see he wants to finally do what’s right, I didn’t get the feeling that he’d made good on his shot at redemption by the time the credits roll. In some ways, it just re-enforces the lack of moral fibre the character exhibits from the start of the film, if you have a think about the way things are left here (which I'm obviously not going to reveal).

Still, for all that, I’d still say go and see The Ritual if you are a fan of horror movies and it’s still playing on a big screen. It’s nicely performed, nicely shot and has a lot going for it as long as you don’t feel you have to like the characters. It’s never going to be the greatest horror movie in the world but there are some nice moments which make it worth taking a look at if you have the time.  Not something I’d watch again but highly recommended in terms of the quality of the piece.
Posted by NUTS4R2 at 20:13