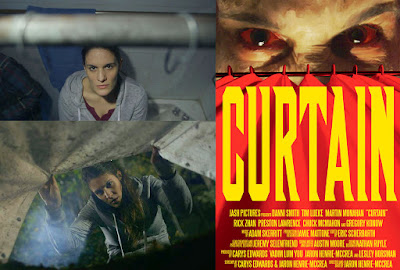 Warning: Some light spoilerage in terms of the basic premise in this.

While I can understand, to some extent, that Curtain is now called The Gateway (according to the IMDB), I have to say that the new title doesn’t live up to the promise of the mystery at the heart of this movie, even if it is technically more accurate, in some ways. I know that if it wasn’t for the provocative hook embodied by the title on the DVD, which in the UK is Curtain, then I would probably have not bothered picking it up and looking beyond the cover in the first place. As it was, this is one of a slew of cheaply priced films which I grabbed at the Frightfest in the last quarter of last year and which a friend recommended to me.

The film is very much an independent film in terms of the production values but it’s a lot better than many I’ve seen going under that label and it’s quite quirky and fun but, also, contains some very nice visual moments that puts it above some of the duller stuff floating around in the independent horror market.

It starts off with an arresting shot of a point of view ascent towards some light from something which I, at first, assumed was the interior of a well (although it’s presumably meant to be a portal... as the narrative makes clear later). It’s a fast and rotating climb to a halfway point, then a brief pause before finishing the fast, rotating POV where the centre of the light becomes a person’s eyeball as a guy wakes up from his slumber on a subway train. The guy is obviously living in fear of something and when he gets to the flat, he removes all the duct tape from the door of the bathroom he’s put to stop... something... from getting out but after he has a few more swirly vortex visions he slashes his own throat.

With that initial set up out of the way, we follow on the rest of the story with a burnt out ex-nurse called Danni, played by Danni Smith, as she moves into the very same flat. To make ends meet she is working as one of those people who stop you on the street with their clipboard and seek donations, in her case for a Save The Whales organisation. However, as she moves into her new flat for her first night and hangs the shower curtain in the bathroom... that’s when her problems begin because, when she awakens the next morning, the shower curtain has gone. Did someone get in the night and steal it? The doors were locked so it’s unlikely. So what happened to it? A classic, locked room mystery, of sorts.

So, of course, she goes and buys another shower curtain and, yep, once the bathroom door is shut and she turns her back on it,well... the next time she checks on it the curtain is gone. So she buys another shower curtain and sets up her mobile phone camera to take a video of what’s happening to it when she vacates the bathroom and, when she plays it back, she finds that the curtain is being sucked through an invisible vortex in the shower wall. Which is nicely done and pretty much mind boggling to anyone who happens to find themselves in this kind of situation. And so, to prove to herself that she’s not going mad, she shows the video to her obsessive and irritating coworker Tim, played by Tim Lueke and, rather than go to the police, the two of them try to solve the matter on their own.

After all... this is a horror movie.

So anyway, it’s not long before they have the bright idea of scrawling an “if found, please ring this number” style message on the next shower curtain they send through the mysterious portal and, funnily enough, they do actually find out that the curtains are ending up somewhere very specific... but that’s all I’m saying about the storyline on this one. I don’t want to give away too much.

The thing that makes the film stand out from many others of this ilk... asides from the fairly unusual idea of a bunch of shower curtains that are pulled magically through a portal, of course... is just how well thought out the shot design, cinematography and editing is in certain areas. For instance, the opening sequence of the man walking home to his flat includes a nice shot of him coming towards the camera on the right of the screen while the other three quarters of the shot are taken up with the blurred surface of a wall. Another inventive moment is when Danni goes on a shopping spree for shower curtains in the local supermarket where the camera is mounted on her shopping trolley in various places and the footage sped up to push the idea that she’s had enough and will do what it takes to sort this problem out.

There’s another really interesting moment where Tim is driving a car and the camera takes the point of view of Danni sitting in the driver’s seat. As Tim is talking to Danni (or us) we see the traffic going by from right to left as he passes it out of the driver side window behind him in frame. And then a moving wipe goes from right to left to show a time transition but we are still on a view of traffic, albeit from a different situation, travelling in the same direction. A lorry follows the wipe at the same place and speed and the illusion this creates for a second is of the lorry actually creating the wipe on the frame, although, of course, it’s only actually in the new footage that is being transitioned too. This was a nice bit of filmmaking and would almost have been worth the price of the DVD alone.

My favourite moment of the movie, though, was also another transition piece. This involves dialogue overlapping from the next scene which, okay, is something which is done a lot in cinema. However, the starting shot is of Danni reading and when the dialogue of a lady talking to her from the next scene infringes upon the shot, she looks up from her book from the first scene to listen to her... we then cut the actual scene where she finishes the motion of her head and looks round to the lady who actually is talking to her in the latter scene. This was another really cool moment in a film which has a lot of nice little things going for it.

My only real complaint is that the kind of horror film this ends up as is a bit of a cop out in terms of actually explaining why, for instance, the shower curtains are being pulled through the void. There’s a big emphasis on some kind of vague demonology in the film and there’s also a ‘birth cycle’ of one of the horror elements in the movie involving these curtains... but no real logic behind them. When the film ended I was a little disappointed in this but at the same time, it reminded me of the excellent fiction of H. P. Lovecraft in a way. Almost always in a Lovecraft tale, the main protagonists would descend into madness or death with no real explanation in the scientific world as to what terrors they have been facing and none is likely to be forthcoming.

While I was a little muddled on one issue in the film, though, the last newspaper headline of Curtain does at least give a certain, very bizarre, kind of redemption to one of the characters and I couldn’t help but think of Lovecraft’s novella The Shadow Over Innsmouth at this point. I’m not sure whether the director was putting a nod in to that story but I certainly think the guy knows his stuff when it comes to these kinds of genres. There’s even a nod to, or at least a vague similarity to be found, in one scene where Danni is attacking the tiled wall of the bathroom to find out what mystery is beneath which reminded me of David Hemmings attacking the wall in Dario Argento’s Profondo Rosso (aka Deep Red and reviewed by me here) and I, again, had to wonder if this was a deliberate nod or a case of serendipity.

What I do know for sure is that, for a fiver, Curtain was money well spent and, though the intense horror elements of the last third maybe don’t live up to the clever mystery of the film’s initial premise, I was certainly glad I saw this one... and also glad the DVD wasn’t labelled up The Gateway, that’s for sure. Certainly a film I’d recommend to fans of gory horror movies as opposed to a straight science fiction audience but, in my experience, there’s a huge crossover there so if you are into either kind of genre I would maybe give this one a go anyway. This one’s definitely worth a visit, just... stay away from the shower.
Posted by NUTS4R2 at 17:20