Try Everything Once Except Incest And Morris Dancing 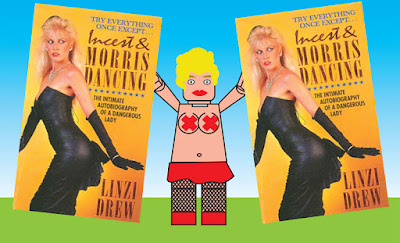 Try Everything Once Except Incest
And Morris Dancing - The autobiography of a dangerous lady
by Linzi Drew
Blake Publishing
ISBN: 978-1857820348

I remember spotting this book back in the mid 1990s in a pleasingly dubious shop in Charing Cross Road. The shop had an upstairs full of ‘book bargains’ and a downstairs which was a cornucopia of eye watering and manhood popping pornography, should you brave your way past the age restriction warning on the staircase leading down... which might just have well been a height restriction to be honest (you must be this tall to ride the sexy magazines). I’d heard of Linzi Drew at the time and was kinda interested in reading that but, alas, had no cash on me to grab a copy. When I finally remembered I wanted to read it ten or more years later, the thing was no longer in print and fetching vast sums of money, well into three figures, if you wanted to order a rare copy of this tome. Nowadays it seems completely unavailable but I kept hitting the Amazon search annually and... sometime last year I got lucky when I saw a reseller listing a copy for just a few quid.

Now, my partial obsession with Linzi Drew began long after the first time I’d actually seen her in a movie (I’ll get to that in a minute). For me, it all started in the 1990s when my small suburb was ‘cabled up’ and then everyone given a ‘good deal’ to have holes drilled into their various window frames for a couple of cable TV boxes... before the prices were jacked up and the aforementioned cable company withdrew their boxes when everyone decided it wasn’t worth paying for a service which continuously changed the goal posts in terms of which channels we were and were not allowed to watch without paying some kind of costly premium. Anyway, I digress...

However, it wasn’t, in actual fact, the first time I’d seen Linzi Drew at all and, I suspect, even if you are reading this now and don’t share a similar reminiscence about the kinds of movies and shows she made, then I suspect you may still recognise her. That’s because she was also crossing into mainstream movies and TV on occasion, albeit in highly sexualised roles, more often than not. Certainly a large portion of the public will recognise her as Brenda Bristols from An American Werewolf In London (playing in the ‘film within the film’ See You Next Wednesday). Or she might be recognised from appearing in various Ken Russell productions such as Salome’s Last Dance, The Lair Of The White Worm or his Nessun Dorma segment to the multi-directed Aria. Some might even recognise her in the generically titled role of ‘stripper’ in random episodes of beloved British TV shows such as Dempsey And Makepeace and, one of my personal favourite shows of the 1980s, C.A.T.S Eyes.

This autobiography, focusing on the author's happy intention that the title of the book is pretty good advice (can’t argue too much with that) starts off on her early life in Bristol, leading up to a quite spectacular (if that’s the right word) milestone in her life. She grows up fairly quickly in the early pages and she takes the reader on a whirlwind tour of her life as a groupie as she slept with members of various pop groups at weekends (Did I mention she is also the famous cover girl on the Roger Waters album The Pros and Cons of Hitch Hiking?) and... it’s actually pretty well written. The style is quite informal and it breezes along through her world of hard work and sex, taking us through the decisions and outcomes of deciding to be an ‘adult model’ and, more often than not, letting us in on just who she slept with and giving us just a little taste of their ‘personality’ before going onto the next set of adventures... some with very famous people and some... not. I don’t want to mention any names here because, if you’re interested, you should track down the book but she certainly had a ‘howling’ good time with a certain director, got ‘hunted’ in the bedroom by a very famous racing driver and had some interesting times all around.

This book was written at a time when she was still in a relationship with Lindsay Honey (whom some of you might even know by one of his ‘porn names’, Ben Dover) but before the birth of their child Tyger Drew-Honey, who subsequently grew up to become famous as playing Jake in the popular BBC comedy Outnumbered. It’s actually quite a refreshing account of her life up until a certain point because you get a really interesting snap shot of what it’s like growing up somewhere like Bristol and then seeing someone applying their personal work ethic to the pursuit of a career in a much underrated profession... and making a good success of it in the face of the horrendous British censorship laws and prevailing attitudes. All this while going up against the bizarrely twisted ethics of people like Mary Whitehouse and coming off as, by far, the more intelligent and well adjusted person.

The last part of the book is where everything goes dark. After a successful run as the editor of the UK edition of Penthouse magazine (where she presumably honed the writing skills which shine so brightly here), she and Lindsay Honey were, quite wrongly I think (judging by the evidence as highlighted in this book), sentenced to go to prison for making and distributing pornography. She had to go for something like four months and you get a real idea of just how daunting it can be waiting a year or more for a trial and how it affects you as a person. It also then, quite fascinatingly, goes on to tell how she survived and just what it was like to be in a woman’s open prison at the time. I mean, she’s no Alexander Solzhenitsyn but she is pretty good at turning a phrase and, more importantly, conveying how something feels so, anyone interested in such things, might want to check this out.

And once she is free and awaiting the release of her partner, the book more or less ends and I was left wanting to know about the next stage of her career (which I understand included being an agent for her son). I believe she has, fairly recently, turned to writing again as, a couple of years ago, she had an erotic novel published under the name Linzi Drew-Honey called Every Shade Of Blue... which I suspect was an attempt to cash in on a series of books about another shade of a certain colour and which, I suspect, she’s eminently more qualified to write about than the writer of those particular novels. I might actually give that one a go myself, although I don’t tend to read that much erotica these days (I’ll review it on here if I do).

And, if you didn’t already guess, Try Everything Once Except Incest And Morris Dancing is a ‘reading recommendation’ from me, if you like discovering the warm, beating heart and sly intelligence of such highly sexualised personalities. It probably won’t appeal to everybody and it’s certainly a hard one to track down these days but, if you want a snapshot of life at a certain time in Great Britain of the 1970s and 80s then it’s a really good one to take a look at. Maybe give this book a try... at least once.
Posted by NUTS4R2 at 19:01