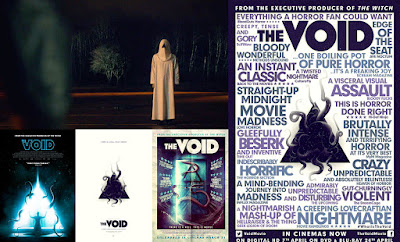 They Void With
Their Boots On

Warning: Some spoilers in this one, I guess.
Especially in terms of the ending.

So the low budget, crowd funded film The Void is one I was especially wanting to see earlier in the year but, like The Love Witch (reviewed here), it only got a very limited screening of a few performances at hardly any cinemas in London and the DVD and Blu Ray editions were hot on the heels of that release. Probably within a few weeks of those initial cinema screenings.

I’d seen only good word of mouth about this one but my own response is much less favourable than I'd imagined it would be. However, there are still some nice little moments in there.

The film starts with a badly wounded man and a woman trying to escape a property in the woods. Two men give chase but the man manages to get away from them. They do, though, manage to wound the woman and stop her progress before they pour gasoline on her and set her alight. One would assume these two are the villains of the piece but, despite the simplicity of the plot, it isn’t quite that black and white. After the opening credits, our main policeman protagonist Daniel Carter, played by Aaron Poole, finds the wounded man from the opening sequence and he is losing a lot of blood. Carter drives him to the nearest hospital and that’s when his troubles start. He finds himself having to shoot a woman who comes at him with a knife, after she's stabbed the eye out of a fellow patient, before back up arrives in the form of another cop. However, not long after the second cop's arrival, the phone lines at the hospital go dead and the radio link to police headquarters is mysteriously cut off. There are also a bunch of strange figures who look like members of the Klu Klux Clan but with big triangles reminiscent of a pyramid emblazoned on the front of their hoods, wandering around outside the building. One of them attacks Carter, who manages to get back inside and away from the mob of... quite iconic looking cultists.

At this point the cult members don’t enter the hospital and are happy to place it under siege while the two pursuing men from the start of the film also come into the building and start causing trouble for the two police officers... who also have a pregnant woman and her father to attend to, in addition to the regular medical staff. Sides and allegiances are soon forged, however, when they are all attacked by some kind of Lovecraftian Cthulhu creature with tentacle power... one of a few monstrosities which are being born from people after death has finished with them.

And that’s the basic plot set up and I’m not going to say much more about that aspect of the film. I was trying to figure out, however, why I wasn’t responding as positively as I might to a film which, frankly, seems to have my name written all over it as something I should be watching.

Now I had a problem with some of the acting performances, for sure. I don’t think the cast were necessarily bad, though... just maybe doing their best with a script which was a little too clichéd and obvious, is my best guess. Some of the dialogue was very bad but, although certain other elements of the film pointed towards a terrific parody of the kinds of ‘straight-to-video’ rental and sell through horror and exploitation titles of the 1980s, it felt just a little too 'dead on' in some ways and I could have done with the dialogue and story line being less poe-faced in certain areas because... well... it could have done with just a little dose of irony lacing the material, I think.

That is to say... it could have been maybe just a little more over-the-top in pushing the exploitation angle of the movie rather than replicating it so well. When Tarantino and Rodriguez brought out Grindhouse, I thought very much the same thing in reference to the two directors’ different approaches to their feature films which made up half of that double bill release. Rodriguez’ Planet Terror really played up the exploitation angle and had fun with it... injecting it with a sense of tongue-in-cheek irony which sat very well with the modern sensibilities of the intended audience. At least, I thought so. Tarantino’s contribution, however... Deathproof... seemed a dead spit imitation of exactly the films it was trying to recall. It had nothing much extra added and felt like an authentic grindhouse movie... with all the negative implications that might carry too. Primarily, for me, being that I thought it was a little dull and reminded me of why I didn’t watch a lot of films of that oeuvre when I was a teen anyway (although it could be said I’m possibly making up for it nowadays).

The Void strikes me as being in very much a similar situation, of the film being maybe a little too authentic, in some ways, to the 1980s video rental market (as it was over here in the UK) that I feel it’s trying to go for. The monsters and main antagonist are all very much what you’d expect as something some of those old directors would have created as an homage to the literature of H. P. Lovecraft and there are also very strong tones of a Lucio Fulci influence thrown into the mix... especially with the ending of this movie which, while almost being a non-sequitur to the events we have been watching throughout the running time, seems to be a direct play for recreating the famous final shots of Fulci’s movie The Beyond (reviewed by me here).

There seems to be lots of practical effect gore and an enormous amount of simultaneous mayhem thrown into the mix... all of which is admirably handled by the director. I personally felt the film needed a bit more of a sense of the 'over the top' element in other areas. Some nudity thrown into the mix, for example, or a much more 1980s horror vibe on the soundtrack, as opposed to some transparent writing lapsing into very modern, atonal sound design style stuff (don’t get me wrong... I’d love it if they released a CD soundtrack of the score by Blitz//Berlin, Joseph Murray, Menalon Music and Lodewijk Vos... I just don’t think it serves the film in a great way).

A special shout out, though, to both actor Kenneth Welsh as Dr. Richard Powell, who manages to capture the style of mad, bad guy from those kinds of movies perfectly (maybe because he’s been around so long and perhaps because he was known to everyone as the face of Wyndom Earle in Twin Peaks back in the day) and also to the team doing the make up effects because, at some point, his character looks like he walked straight out of a Fulci movie. There’s a beautiful extra on the Blu Ray disc which is a gallery of pre-production art from the film and it’s a really nice thing to have on there. Would love to have seen it printed in a proper book instead of it being a digitised bonus thing, though.

I don’t want to trash this movie because it did hold my attention and it’s obviously a labour of love for the team who brought it alive. There’s some nice stuff for genre fans to sift through including those truly iconic and simply designed ‘cultists’ and even a TV showing the opening sequence of Romero’s original Night Of The Living Dead in the background... foreshadowing the siege situation the characters inhabiting the hospital will soon find themselves in (and now I come to think of it... didn’t a fair part of Fulci’s The Beyond, which I mentioned earlier, take part in a hospital?). I think there’s enough here to keep most modern horror fans happy with the movie... especially if it was a middle section of a triple (or more) bill midnight movie screening. I think those of you uninterested in the genre at all would probably struggle with a way into this one but, at the same time, I don’t think the film was made for that kind of audience anyway. Probably not a film I would personally watch again unless I was doing an all night movie screening with some mates and some alcohol but it’s a nice stab at trying to make a product in a way which hasn’t been done un-ironically in a while so... you know... if you’re into horror then maybe give it some of your time at some point.
Posted by NUTS4R2 at 19:18