The Autopsy Of Jane Doe 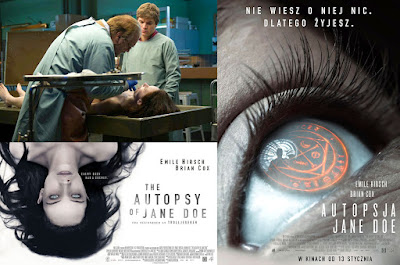 Warning: Yeah, there are some light spoilers in this.

André Øvredal is the Norwegian genius behind the original Trollhunter movie (which I reviewed here) and The Autopsy Of Jane Doe is his next feature length film, shot in English and set in Virginia in the US (which I best know of from my annual reading of the latest of Patricia Cornwell’s Kay Scarpetta novels every Christmas). It’s a film I was desperately wanting to see from last year’s London Film Festival but, alas, I was unable to make the inconvenient screening date and time of this one. So I patiently waited for it to get a proper release at the cinema, only to find it was one of those films that got a completely crazy release in just a couple of screens in London (if that) at truly silly times. So, yeah, I wasn’t able to catch it then either... shame on the sad state of this country’s cinema distribution that it’s so hard to see films which aren’t American blockbusters at your local multiplex now. I believe cinemas should be forced to use at least half of the screens in their buildings for non-American films of much smaller budgets. We are in exactly the same situation in this country as Germany was at the start of the 20th Century (and again in the early 1970s) which prompted them to start taking action against the monotonous certainty of the US ‘hit machine’. Frankly, we should have ten times more cinemas in this country anyway but... I’ll leave that serious issue for another day.

So, anyway, I finally got to see this movie now it’s been released on Blu Ray and, while it’s nothing like the tone of the director’s Troll Hunter movie, it’s a pretty great little horror film and, it seems to me, it does a lot of the things that The Void (reviewed here) was trying to do last year but with much more success at every level here, it has to be said. The film starts off with local police working a crime scene in Virginia in which all the victims in a large house have died from various wounds or burns. In the cellar, however, they come across the body of a naked woman laying half buried in the dirt (the titular character, played by Olwen Catherine Kelly).

The film then jumps to the local morgue where, pretty much, the entire rest of the movie takes place. It’s a family run business and we join the two main protagonists Tommy and his son Austin, played by the inimitable Brian Cox as the father and Emile Hirsch as the son. Austin is supposed to be following in the family business but hasn’t yet told his dad that he doesn’t want to do that... due to the loss of their mother a couple of years hence. They are just finishing up an autopsy and, after introducing his dad to his girlfriend Emma (played by Ophelia Lovibond), they are about to finish their day when the sheriff turns up with the ‘untouched’ lady found at the crime seen shown previously. The cops need everything autopsied but this one they need especially urgently because, with no marks on her body, they would like to figure out the COD (cause of death) in case it gives them a clue to the rest of the mangled up corpses at the site.

So that’s the basic plot set up and then, since it’s a horror film, the story elements start getting laid on so that the ‘pulp horror’ stuff in the second half of the movie can play out more easily. Now, it has to be said, there are a lot of cliché elements to this film (so clichéd that one person in the room as I was watching this had to walk out because it was so irritating to him). For instance, you have the backdrop of a storm hitting the county late at night while the autopsy is being performed knocking out the electricity and plunging things into darkness and gloom, even when the generators kick in for a bit. You have the beloved family pet used to set off a scare... which is a bit of a horror story textbook 101 in itself... and, once you know of the existence of said feline, you are obviously just waiting for something bad to happen to it, right? There’s even a scene where the father is showing the girlfriend a corpse and she questions the little bell tied to the ‘client’s’ foot... it’s explained that this old tradition is kept alive by the father and is a hold over from times when corpses brought in were not always ‘that dead’, they just appeared to be. So, of course, you know this is a set up for the ringing accompanied by walking corpses later on in the film... what other purpose would it have there?

So, yeah, the director does tip his hand to a lot of the elements in this one very early on, to be sure but, personally I don’t think this ever threatens to really derail or spoil the story at all and a lot of that is because of the way the intrigue about various discoveries of the secrets the corpse is hiding play out. I was hooked when Brian Cox straight up finds out that both the wrists and ankles of the film’s ‘Jane Doe’* have been shattered. So how do you shatter someone’s joints like that without leaving an external mark? Then, as the examination continues and various parts of the body are cracked open and violated, they find things like the tongue bitten off... the eyes are unusually milky... a fly crawls out of the nose... there is no rigor mortis... there is a tooth missing... there is trauma to - but no semen in - the vagina and the lungs are severely blackened like the girl has been burnt. Brian Cox’s character has a great line about the significance of that last item when he likens it to finding a bullet in the brain but with no gunshot wound.

Of course, by this point my brain was thinking the ending of this movie was going to be a not too distant cousin of Aldo Lado’s giallo Short Night Of The Glass Dolls but, no, it’s not quite that simple. In fact, Brian Cox talks about Jimson Weed used as a paralysing agent at one point, presumably to put that very thought in your brain but, as I said before... it’s not ‘quite’ the solution to their problem here. When they find a strand of fabric in the mouth and then, later, find the girl’s missing tooth wrapped in a large chunk of the same material, they unwrap it to reveal a load of writing in ancient, magical symbols. This sets up a beautifully “what the heck?” moment when the skin of Jane Doe is peeled back and they find... yeah, like I’m going to tell you what they find here. If you like what you are reading about this intriguing, slow reveal plot then have a look at this movie.

The acting is, of course, first rate (which is what you would expect with Brian Cox on set) and when the film goes full-on horror for the last third of the film, it's pretty handy having someone that credible around. The director also has a good way of shooting things to disclose those familiar ‘is there someone sinister in the background of the shot’ moments by doing a lot of wide sweeps with the camera passing the main focal points of the scenes. This teases the horror but in a more naturalistic way than the current ‘reacting to the environment’ kind of modus operandi of a lot of Hollywood horror at the moment but it doesn’t do it any less effectively. I did get a bit disappointed in the last third of the movie in some ways  because, yeah, we’ve seen it all before (especially in the 1980s on ‘straight to video’ tapes from hell) but, ultimately, the quality of the direction and the investment in the actors pays off a lot more than in recent movies in a similar vein (one of which I mentioned above) and I’m really glad I got a look at this one.

All in all, The Autopsy Of Jane Doe is an intriguing little horror movie which might even coax non-horror fans in with the mystery element of the story and, I suspect, give them a more interesting time than audience members who are more inclined to treat this genre as their bread and butter. Having said that, it’s not as good as the director’s previous movie, Troll Hunter but, honestly, that’s a bit of a masterpiece and would take some topping. Although, really, you can’t make a comparison here because that movie was its own thing and this one here is a nice throwback to those old H. P. Lovecraft stories of days gone by... filtered through a strange, mid-1980s US and Italian filter... and that’s a compliment, for sure, rather than it is anything else. So, you know, I have a lot of regard and respect for this movie and would thoroughly recommend it if you want a good night in with the lights off and with the clanks from your own central heating system making you just a little wary of what is going to happen next in the film. It’s not for everyone but I really rate this one so, you know, give it a go maybe.

*For my fellow countrymen who don’t know, John and Jane Doe are designated names for unidentified corpses in the US. In England it’s John and Jane Smith so, you know, that’s why The Doctor has been John Smith as an alias quite a lot of time in Doctor Who since the 1970s Jon Pertwee era.
Posted by NUTS4R2 at 19:38