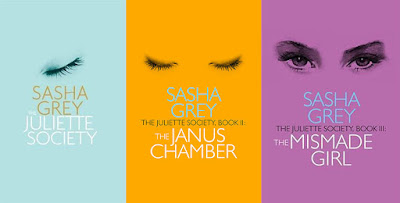 Well, I have to say that, as much as I admired the sheer intelligence and elegance of her attitude and words in The Juliette Society, this sequel called The Janus Chamber really blew me away. I found it way more interesting and addictive than the first one because, while the stylistic nuances in terms of Grey are the same here, as she talks first person through the guise of her central protagonist Catherine, there’s a little more of a story hook to this one... at least, that’s the way it seemed to me.

To be clearer, this one centres around a mystery where Catherine, who has moved on a few years since the last book and who has devoted herself to her politically ambitious boyfriend, discovers a person called Inana Luna, who reminds her of the lost Anna from the previous book. She discovers the depths or... actually... heights to which this person devoted her life in pursuing her sensual limits but her untimely death, concluded a suicide by police, has not convinced Luna’s sister there wasn’t some foul play and so Catherine, who is now pursuing a career as a journalist, pursues the story. She contacts the sister, is given Luna’s diary and even gets to stay in Luna’s old apartment as she goes undercover to work at the hotel which is connected to Luna’s past. From there she gets in good with management and then gains access to the secret, untouchable, extreme sex club in the hotel’s basement and the maze of rooms/chambers full of decadent behaviour and ‘anything goes’ consensual sexuality. And that’s the basic story set up but, as Grey so eloquently puts it here... the story progression in terms of events that happen is not the real thing that people need, so by the time you get to the possibility of an ‘end game’, it’s unimportant... it’s the journey that matters. Closure is not a necessity.

There’s a brilliant chapter on the mystery of hotels near the beginning of the novel which is just the tip of the iceberg when it comes to the way in which Grey explores each and every subject in life as it comes up. Subjecting all the little elements of the physical and mental environment of the story’s main protagonist to a thorough dissection through some quite searing observations, wielding the scalpel of her ‘gaze made words’ with all the care of a surgeon. And the book is full of these kinds of penetrating looks at the world and the way our society views things which I truly appreciated. There are some great, playful metaphors which constantly take you into little diatribes about various aspects of the world around us... such as the contemplation of a changing room in a lingerie shop being an exploration of the relationship with a priest in a confessional box. Passages like this elevate the novel and lend a lot of substance to what is, at heart, an erotic adventure.

Like the first novel, being as Catherine is now a ‘former’ film student, the writer works her own appreciation of the art of cinema into the text and weaves various movie references throughout. She’s obviously got a thing for the films of Michelangelo Antonioni and, one of my least favourite (actually), L’Avventura, is very much used as a metaphor for the plot line here (indeed, there’s even an establishment in the novel named after another Antonioni movie, La Notte). There’s a lovely analogy, for example, that the missing Anna in L’Avventura is, like Schrodinger’s Cat... in a perpetual state of ‘she’s both on and off the island’, of which I was very appreciative.

The book is full of little nuggets like these within the main text. One minute she’ll be talking about Zulawski’s Possession (reviewed here) and the next she’ll be referencing the plot of Brian De Palma’s Sisters (reviewed here). But these references are, hardly, ever just references to the films themselves. They usually serve a purpose, to drum home an observation about a particular thing... like the uncertainty of picking up on the thread of something and sticking with it to find the reward at the end. One of the passages reads thusly...

“Sometimes the best movie scenes happen after the lights have come on and the credits have scrolled out of sight. When you're shuffling out of the theatre, disoriented because your mind's been shredded from the ride the director's taken you on. Then the screen flickers back to life and there's more, and you rush back inside, desperate to soak in a more complete picture of the message, but you're too late. You miss the key moment that brings realisation full circle to unlock the last puzzle piece of the film.

And sometimes, the superheroes just sit around eating shawarma."

Regarding the erotic content of the tome... well, it seemed to me to be a lot stronger and a little less vanilla than the first one. Whenever the character of Catherine writes about the shining star that was Inana Luna or, indeed, describes the sexual adventures going on around her which she either observes or participates in, I couldn’t help but think of the writer’s knowledge and skill set of her own life being thoroughly mined here. Not that I want to make the obvious mistake of confusing an artist with her work but there’s usually the spirit or soul captured within a writer’s words and... well... put it this way... There are people I would trust to know what they are talking about when it comes to content of a hard erotic nature and some people I wouldn’t. Experience counts for a lot and Sasha Grey is definitely someone I would trust to be writing about this kind of stuff with a certain authenticity and, since she’s turned out to be such an intelligent individual anyway, she’s definitely one of the people I would rely on to deliver more than a kernel of truth about the specific kinds of shenanigans going on in this book, that’s for sure.

And that’s all I have to say about this mini masterpiece other than a) the book leaves you on more of a cliff hanger this time around (this is definitely Sasha Grey’s The Empire Strikes Back when it comes to the dramatic portrayal of her story and the third novel in the trilogy, The Mismade Girl, is due to be published in March 2018) and b) I now have a list of notes on things to find out more about like flower flipping, Pryings by Acconci and the Fantasius Mallare because of this novel. So, yeah, I guess you can say I had a pretty good time with this one. Sasha Grey is turning out to be a most rewarding writer and, if you liked The Juliette Society, the The Janus Chamber is definitely something you are going to want to take a look at.