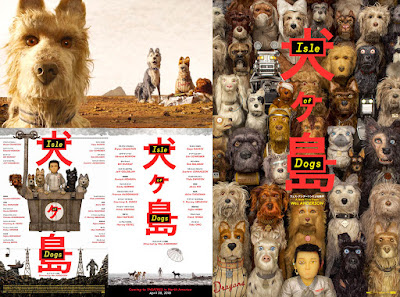 So it’s only April and here we have what may well turn out to be the absolutely best film of the year. Isle Of Dogs is yet another corker from one of the two greatest, living American directors Wes Anderson (the other being Hal Hartley, of course). Now, though I’ve seen almost all of Wes Anderson’s movies, I’d not seen his earlier stop-motion movie Fantastic Mr. Fox (I don’t remember being that impressed with the original Roald Dahl source material as a kid) but I’m now quite keen to see this as I realised, while watching this, that the medium in which Anderson has chosen to work with on this thing in no way compromises or marginalises his artistic signature.

To the contrary, despite the fact that none of this film is live action, it looks and feels unmistakably like a Wes Anderson movie right from the get go. All the usual markers are there including the labelling, the setting out of parameters and the linear, clean shots that mark his work out with a unique fingerprint. In fact, as I was watching the film, I started to wonder if the reason that absolutely no compromise in this director’s style is in evidence here was in fact because his regular, live actions films themselves, in some way, resemble neatly organised, animated works. It’s something I’ll need to ponder on further.

Isle Of Dogs starts with a metaphorical fable (in terms of its relation to the main body of the story) of a boy samurai and his defeat of an enemy that wanted to rid Japan of all dogs. The story then flashes forward to the main setting of the film... a Japan of the future in which the mayor has ordered all dogs, which have pretty much contracted a contagious dog flu, to be dumped on a trash island. It is here that the main human protagonist’s dog ‘Spots’ has been dumped first (also known as Dog Zero) and it’s here that Akira, the boy pilot, flies to rescue him. The film shows how, when he teams up with a pack of ferocious dogs, he goes to find Spots and right the wrongs of the mayor, who is about to poison the entire island and wipe out all the canines.

The dogs all speak English and are voiced by various film stars, many of them Wes Anderson regulars. So people like Bryan Cranston, Bill Murray, Liev Shreiber, Edward Norton, Bob Balaban, Harvey Keitel, Greta Gehrig, Frances McDormand, Scarlet Johansson and, seriously, Yoko Ono. Meanwhile, various Japanese human characters, played by a variety of actors and actresses, only talk in their own language and it’s completely raw in the film except where it’s deliberately translated by various people or by electronic gubbins (as pointed out to the audience in the typical Anderson way). So, in some ways, the Japanese humans have the same kind of effect on proceedings as the nonsensical, abstract ‘waaah, waaah, waah’ voices of the adults in a Charlie Brown cartoon. Well... unless you happen to speak Japanese, I guess.

The film breezes along and it has all the usual, inventive, witty and sometimes quite moving dialogue moments you'd expect from Anderson, as Atari and an angry stray dog called Chief form an unlikely bond in an attempt to find Spots. The animation is just perfect and some of the expressions the dogs make to the audience where they break the fourth wall like Stan Laurel or Oliver Hardy might do in one of their shorts when they look to the audience for some kind of understanding or validation is great. It’s also got its own visual short-hand going on too, as any filmed footage shown on a TV or screen of the characters is done as a traditional line drawing style cartoon whereas the body of the work is done in a stop-motion style animation. So that was a nice touch.

The music is great too... as you would expect when the great Alexandre Desplat is working with this director. I believe this is their third collaboration and, like the previous two - Moonrise Kingdom (reviewed here) and The Grand Budapest Hotel (reviewed here) it’s absolutely brilliant and quite possibly this will also be the best score of the year too.

Like pretty much all of Anderson’s films, there’s usually a substantial amount of needle-dropped music in his work and although this has kind of calmed down a little since he started working with Desplat, there are still a few places her and there where he goes the needle dropped route in this. One of his listed influences on this film is my favourite director, Akira Kurosawa and there are a few pieces from Kurosawa scores in the movie. The one which made me jump off my seat was in a scene where the theme from Seven Samurai starts playing... a tune which is never far from my mind anyway. There’s also, amongst the odd, assorted songs, a nice and extremely unusual ‘cover version’ of Prokofiev’s Troika thrown into the mix... so, yeah, you can bet I’ll be ordering this CD as soon as I stop typing up this review.

And there’s probably not too much more I can say about this convoluted yet ultimately simply rendered and inventive film. The problem when someone makes such a perfect movie is that there’s not always as much you could say about it as there are no flaws to pick up on. Isle Of Dogs is easily one of the best animated movies I’ve seen for quite some time but it’s also, quite unmistakably, an ‘on brand’ Wes Anderson film and this director just seems to be getting consistently better with every piece of motion picture art he makes. I can’t recommend this film enough to anyone who will listen and, honestly, you’d be really missing out if you don’t see this one at cinemas. Such a great ride.
Posted by NUTS4R2 at 14:55