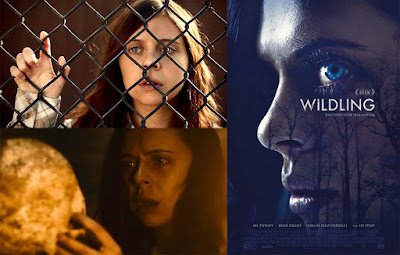 Warning: Spoilers for those of you who really can’t see this stuff coming from the outset.

Wildling is not the film I thought it was going to be.

No, I mean it really wasn’t.

I was sitting in the cinema waiting for the movie to start and the trailers came on and then they started showing the trailer for Wildling. Wait, what? Turns out the trailer was for a completely different film called Hereditary and I’d somehow got it mixed up in my head with the title Wildling. Well the little girl in the Hereditary trailer looks like some kind of wild thing anyway, right? So I had literally no idea, as I sat waiting for the trailers to end, what film I was about to see.

As it happens, this was a good thing because, by the time Liv Tyler turned up as the town sheriff, I realised that I had seen this trailer and that the film was, at least, on my cinema hit list... it’s just that I’d only seen the trailer once as opposed to the seventy gazillion times they’ve been playing the Hereditary trailer at my local for the last month. So I’d assumed that one was coming out first.

Now, I am astonished to see that the IMDB average ratings for Wildling mostly range from zero stars to three stars out of ten and I can only wonder if these people were watching the same movie as me. I... bar one or two things I shall go on to outline... absolutely loved it.

The film starts off with a little girl called Anna, locked away in a bedroom, kept there with stories of the Wildling coming to eat her. Her ‘daddy’ is played by Brad Dourif so... you know, right from the outset you realise she’s being raised by a nutter. When she grows old enough to get her first period, ‘daddy’ starts directly injecting stuff into her womb through her tummy each day to stop her maturing into... yeah, you know exactly what’s coming from this point on. She is, of course, the Wildling of the title and, as you’ll discover later, her true parentage is as yet unknown to her.

When she gets too sick from the drugs Daddy is pumping into her and asks him to end her life, he goes to shoot her but ends up shooting himself in the head instead. The police, in the form of Ellen Cooper, the town Sherif played by Liv Tyler, arrive and Cooper takes Anna to her home while various tests results are waited on. There, Anna learns about life with real people and bonds with the sheriff’s teenage son Ray, played by Collin Kelly-Sordelet. He is really excellent here but the real star of the movie is Bel Powley, who plays the young 16-18 year oldish Anna (although she’s way older than that in real life). She is so good here.

Of course, the combination of Anna's now ‘woke’ and changing, hormonally challenged body which unleashes her natural ferocity and defences coupled with the secret society of Wildling exterminators all comes to a head and things get out of control as she becomes the prey and takes to the woods for survival. In one of the film’s few 'less than completely credible' moments, it turns out that ‘Daddy’ managed to miss anything vital when he shot himself in the head and so he emerges from his hospital bed to lead the secret society of vigilantes on a quest to kill Anna.

The last quarter of the movie is very reminiscent, or at least it seemed to me, of the original John Rambo movie First Blood... where you have the lone warrior facing off against the enemies and taking them out one by one. I was just waiting for a Jerry Goldsmith score to kick in and then this illusion would have been complete.

The film has, it should be said, nothing really original going for it in the annals of ‘man-beast’ (or should that be woman-beast?) or werewolf films but that really doesn’t matter when the execution is this good. It’s not really played for scares, for the most part, either but that doesn’t make it less of a movie. One of the stupidly critical reviews I skimmed on the IMDB to find out why people were so down on this said that it’s not a proper horror film because it’s not scary. Seriously? A horror movie doesn’t have to be scary, people! After all, would you say that The Bride Of Frankenstein or Son Of Dracula or Ridley’s Scott’s A L I E N are in no way horror movies just because they’re not scary. No... Wildling definitely has a ‘beyond science’ shape shifting monster lurking at its heart... a sympathetic monster for sure but it still qualifies as a horror movie in my book. And it’s an excellent one too. The writers are smart enough to leave out any complicated origins as to where the Wildlings came from and just leaves their presence unexplained so they can get on with the story. Which is something that a lot of horror movies have learned to do since the dawn of Romero’s Night Of The Living Dead, from what I can see.

It does have a lot of 'almost' clichés and it is pretty predictable, to be fair. I knew pretty much what the very last shot was going to be... or where it would be located, at any rate... from the moment Anna first goes into the town library in the first third of the movie but it’s a nice ending and there is an extra character in that scene which I didn't realise would be there (I’m not going to say who though... you have to watch it if you want to find out).

My biggest problems with this movie are with the transformation and design of the title creature. I mean, good grief, all that limb bending, snapping and popping that An American Werewolf In London was somehow so influential with has got to stop. It was fine once but it’s not the only way that you can express the transformation of human to beast. Good grief, it’s got all the potency of an episode of Manimal now (which, for those of you who haven’t seen this truly awful 1983 TV show... reduced the transformation of the title character into a bit of a joke by the time it had finished its one season run). This is such a cliché now. Although the way Anna starts losing teeth in preparation for what the transformation will need when it comes to pass is a nice touch.

Also, the creature design just looks like a bit of 1960s neanderthal make up and I was kinda expecting something a little more ferocious or special than what we’ve got here, to be honest. I guess the director thought this look would be a little more credible but, personally, I thought it was just a little too understated. By the time we get to the full transformation, I wouldn’t have thought you would have needed to hold back so much. Luckily, Bel Powley excels as much as the savage version of Anna as she does as her more human counterpart and she manages to sell it to the audience in spite of the not so inspiring creature design.

All in all, though, these are very minor complaints for a truly well made horror tale... which is exactly what Wildling is. It’s also nice to see Liv Tyler in something really good again too and I think she’s a little under utilised as an actress, to be honest. If you go to this one expecting a scary movie then you might be in for a bit of a disappointment but, if you are looking for a well observed, well made genre film then you should definitely go to see this one. Truly glad I got my films mixed up, this time around.
Posted by NUTS4R2 at 14:11