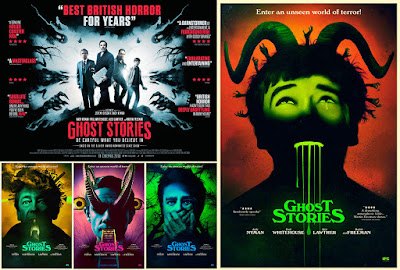 Well... I really wanted to like this one but, unfortunately, it was not to be.

I’d wanted to see this in one of its earlier incarnations as a stage play in the West End of London a few years back but, alas, the truly scary ticket prices had put me off seeing it. Something which I’m now thinking may have been a blessing in disguise, to be honest.

I can’t quite put my finger on why I was so disappointed by this one because, frankly, the movie is very well put together. I doubt it’s because I saw another brand new and quite intensely scary movie earlier in the week (the frighteningly brilliant A Quiet Place, which I reviewed here) because one scare fest does not necessarily cancel out the other. I suppose it could be, as mentioned by me in another review recently, that I have become somewhat jaded by the format of ghost stories of late.... although, having said that, I can think of several horror movies with ghostly themes which have been fairly successful in their intent over the past five or ten years (although none of them can hold a candle to Robert Wise’s original version of The Haunting, of course).

Let’s see if I can figure out what this one didn’t deliver as I start writing about it.

Ghost Stories stars Andy Nyman as a mildly famous, professional debunker called Professor Philip Goodman. The film is also co-directed and co-written by Nyman and Jeremy Dyson and it takes the form of one of those old portmanteau style horror movies of years gone by... the kinds of things pushed out by Amicus and AIP back in the day (and even Ealing, in one notable case). I can only assume it’s an homage to these kinds of films and, thinking about it, I suspect this is where my main gripe with the movie lays. I’ll come back to that.

Nyman’s Professor Goodman is contacted by his childhood hero, another professional debunker, who disappeared in mysterious circumstances decades before. He challenges Goodman with investigating three cases which he, himself, couldn’t disprove and the film takes the format of Goodman going to each of the troubled individuals who have had ‘supernatural experiences’ in turn... played by Paul Whitehouse, Alex Lawther and Martin Freeman.

Contrary to the blurb on the trailer, that the various cases are each more terrifying than the last, I personally found it to be the exact opposite of this, with the scariest one being the first segment. In this, the director’s skillfully shoot a more or less static interview between Nyman and Whitehouse for the first half of the segment, cutting between various angles and distances and it is in this sequence especially that I found them to be absolute masters of their craft. I was especially enamoured of the way they designed the composition of their frames to keep the audience fixated on specific things and not jump them out of it... something which is almost a necessity since the widescreen format started being commonly used in the 1950s and it’s a skill which, it seems to me, a lot of directors and cinematographers seem to forget these days.

For instance, they’ll have Whitehouse’s head large on the right hand side of the screen and, when they cut back to Nyman, his head is also filling the same area of the screen so there’s no jolt or excessive eye movement on the part of the audience. This was pretty good and especially effective in this first sequence (which is pretty much the only one which employs static shots in abundance in the interview part of the mini chapter) because when we go into Whitehouse’s flashback of the events that took place... the camera movement is a contrast and drags you into a scarier journey where, like in all the other segments, the camera can be wandering around and allowing the audience to anticipate and keep vigil on various corners and reflective surfaces on the screen... to build tension as to where the next threat is coming from.

After the denouement of this first scene, however, with an all important finger hooking into the protagonist’s mouth which was made notable enough to kind of give away an echo of a specific piece of ‘master imagery’ at the end, we immediately go into Nyman interviewing someone else without going back to Whitehouse’s character. This immediately got my back up and my ‘Spidey sense’ tingling because there’s no way of telling whether, as implied, Whitehouse survived his encounter and it immediately made me think that the main threat and punchline of this film would revolve around the character of Goodman himself, far more than the set up of the sequences as is first implied.

Sure enough, the second segment, which is a bit of a romp and involves a truly excellent performance by Alex Lawther, takes us a little closer to the uncertainties of Goodman in the set up for the interview. Actually, Lather looks very much like a demented ventriloquist’s dummy in some ways and I was totally expecting him to actually turn out to be one by the end of the segment but that was not the case. One wonders, though, if the look of the character was a nod to the 1945 movie Dead Of Night, in terms of referencing the lineage of this type of horror format.

This whole sequence involves a car in the forest coming a cropper with a creature that is probably the devil (or a vertically walking goat person, you decide) and, my one take away from this was I quite liked Haim Frank Ilfman’s score in this section, although I suspect the particular Cineworld screen I was looking at this in had one of the speaker channels down and so none of the music seemed particularly well mixed, even in the horrible and much hated product adverts before movie played.

Again, this second story sequence left things hanging in terms of the interview by the end of the story and you were never really sure whether the main protagonist really got out alive or not... at least that’s how it felt to me.

By the end of the third segment, which starts off promisingly enough, things start to get significantly mixed into the personal history of Goodman himself and it’s only a short hop away from being the kind of ending you would expect from this type of multistory linking device but, alas, not really any different from such tales we’ve seen or read in the past. Which I think is my main problem with it. It’s not that the specific ending is obvious... it’s not really. It’s just the style of ending which seems quite weak, to me and, coupled with my feeling that the individual segments all came to a stop just when they were starting to actually get scary... well, it really left me spectacularly unimpressed and shoulder shrugging by the end of the movie.

Which is a shame because, apart from the actual structure of the writing, everything else is good. Even the written dialogue is well put together. The performances are all sound and the direction and cinematography all pretty amazing. So I really am surprised that I was so underwhelmed by this production and I’m now wondering if it’s just because I’m ‘an oldie who’s seen it all before’. I don’t think I could really recommend this one to my friends and I don’t think I’d ever want to watch it again (although I do want to pick up a CD of the score, if it’s released) but I suspect teenage viewers who may be less familiar with the dark and delightful legacy of horror cinema this is so obviously trying to tap into may get a lot more out of Ghost Stories than people like me. I’m not saying more movies like this shouldn’t be made... I just wish they were a little less obvious than this as to the nature of their end game and, maybe, just a little scarier on the journey to their final destination. This one’s not quite my brand of tea, I’m sad to say.
Posted by NUTS4R2 at 18:11