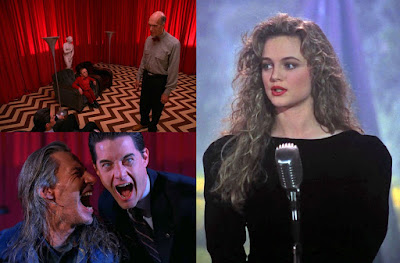 Warning: This has some small spoilers.

Okay, so we’d waited long enough but we weren’t that far into the start of the New Year, as I recall, before we were finally able to see how the bunch of cliffhangers we were left with at the end of the first series of Twin Peaks (which I reviewed here), were to be... somewhat resolved. Most things were sorted out fairly quickly but the one thing which everyone remembers is the long, slow and painfully drawn out sequences where Dale Cooper is lying on the floor bleeding out with gunshot wounds and being as polite as he can to this elderly figure who is talking to him and not cottoning on that the prone Special Agent needs help... as he lingers and moves around the place at a snails pace.

Eventually, of course, Coop is found by somebody else and, after a fairly quick recovery in the hospital, things are back on track again in this run of 21 more episodes which comprise the second series (the first series being only eight shows). We have an abundance of varied things happening over the weeks such as Laura Palmer’s doppelganger cousin, played by the same actress, being murdered by the same person who killed Laura and left wrapped in plastic in similar circumstances. We also have the resolution, of sorts, to who killed Laura Palmer about a third of the way into the season, which kinda left Lynch and co with nowhere else left to go with that story line but, it’s my understanding that the producers wanted some kind of resolution to that set up while Lynch was quite happy to never let people find out. I suspect his third series, made last year and which I haven’t had the opportunity to see yet (at time of writing), is a lot less compromising than what was happening back then. I understand Lynch even walked on it before production commenced until the company putting out the new one tempted him back with complete control over the new show.

So with Laura Palmer’s killer caught and, as it happens, dead (although it’s not the last time you see him in the show)... we have a load of other plot lines developing and the effect it has on the show, with lots of different characters and stories suddenly just showing up to the party, gives the whole thing even more of the soap opera feel that Lynch was originally looking for (Lynch himself also plays Dale Cooper’s deaf boss Gordon Cole in some episodes, where he absolutely delights). The various new elements weave in and out of a thread which is ultimately leading to a surreal place called The Black Lodge which was also, we are told, of special interest to the team on Project Blue Book (when that was an active thing in the... what... 1950s and 60s?).

We also have a lot more of Killer Bob - who is the being who inhabits various people when they are doing the killing, David Duchovny as an FBI agent in drag (I believe this is the role which brought him to the attention of Chris Carter and paved the way to him being cast as one of the two principle characters on The X Files) and, in the last few episodes, a new love interest for Agent Cooper in the form of Annie, played by the then relatively unknown, Heather Graham... who charmed the pants off of everyone in Twin Peaks and certainly the audience watching. Which makes the last episode in this series, which also leaves things on a kind of cliffhanger, in some ways, even more gut wrenching to watch a second time around. I won't say why, however.

It’s funny but I seem to remember the iconic dancing dwarf man in the room in the White/Black Lodge being in a fair few episodes of the second series but, in truth, he’s hardly in it at all, although he does feature prominently in the last episode. One thing which did send a shiver down my spine in a... ‘Oh.  Real life did almost imitate art with just one year out.’ kind of way was a moment towards the end of the last episode where the dead but ethereal form of Laura Palmer looks Agent Cooper in the eye and says... “The next time you see me will be in 25 years time.” Wow, talk about being prophetic. Lynch almost couldn’t have engineered that coincidence properly if he had been trying (and who’s to know... maybe he was).

The death toll in this series is a lot higher than the first with regular and semi regular characters being killed off, many of the most loved ones in the last episode. The whole thing about this series seems to feel incomplete somehow... like there was more to come but things didn’t happen the way Lynch wanted them too, maybe. Certainly, the potential romance between Audrey Horn and Dale Cooper didn’t flourish the way it was intended due, from what I can understand, to tension on the set with Kyle MacLachlan’s real life girlfriend of the time, Lara Flynn Boyle (who played Donna). Instead, we have a young Billy Zane taking up romance duties with Audrey and, as you might expect from this great but somehow under celebrated actor, he does a damn fine job here.

Also, there’s an absolutely stand out episode where... not too much happens... but it’s absolutely brilliantly directed by actress Diane Keaton. It’s the only one on the series that I can remember which has such a stylised approach with some gorgeous shot design and, as I was the first time around, I was completely mesmerised by some of the stuff she gets up to here... such as using the square windows in two constantly swinging doors to highlight two actors talking on either side of, and behind them, to punctuate the conversation. Or using the placement of a giant ice cream cone on the chequered floor of the local cafe to carry on the chess analogy brought to the series by Dale Cooper’s arch villain, former FBI Agent Windom Earle, played by Kenneth Welsh. Seriously, Keaton should be better known as being as formidable a director as she is an actress, if this episode is anything to go by.

And that’s all I have to say right now about series two. Still a joy to watch and, as always, the villains in this are terrifying. Not everything actually makes sense but, I expect it makes a lot more sense than what we get in the new series, judging from comments I’ve seen and heard by other people on twitter. Hope to acquire a copy of that one soon. My next stop before that, however, has to be the prequel movie, Twin Peaks - Fire Walk With Me.