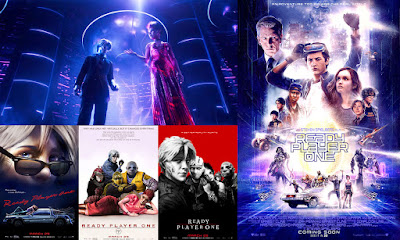 Ready Player One is the second new Spielberg film I’ve seen at cinemas this year... the first being The Post released back in January in the UK (you can read my review here). I’ve always quite liked Spielberg’s cinema with the odd few exceptions and this one is... well it’s neither bad nor great. It’s also got a lot of information crowding out almost every frame so I’m not sure if one viewing is enough to process it all. That being said, I’m not sure I’d care to sit through it all for a second viewing so I’m currently locked in kind of a Mexican stand off with this film.

It’s based on the best selling and highly recommended novel of the same title (that title being a general call to arms for those of us who remember it on all those arcade games of the late 1970s and 1980s) by Ernest Cline, who also co-wrote the screenplay. Well, I say highly recommended... one of my friends recommended I read this a few years ago and I just never got the ‘to be read’ pile low enough to add it. So I’m not exactly ‘in the know’ about how faithful an adaptation it is... all I knew before going in was that it heavily references lots of pop culture of the 1980s and 1990s (and a few other eras too, as it turned out). However, as it happens, my friend Teresa, who was the one who recommended it to me, also saw this the same night I did and she messaged me the next morning saying that it wasn’t anywhere near as good as the book. So... there you go. Maybe I will get around to reading it at some point.

The film stars Tye Sheridan as main protagonist Wade Watts, the brilliant Olivia Cooke (so good in The Limehouse Golem, which I reviewed here) and the wonderful Mark Rylance as Halliday, the inventor of the virtual reality world The Oasis, where most of the film takes place. It also stars Simon Pegg as Halliday’s former partner and Rogue One’s bad guy Ben Mendelsohn as the main antagonist here.

The plot is fairly simplistic...

In the relatively near future, people are plugged in most of the time to their computer simulated VR world The Oasis, where anything can happen. I’m not sure how the economy of this world works... I suspect it’s all much better explained in the novel... but Wade lives in the equivalent of a slum and he, like many others, are looking for three keys hidden by the creator of the games after his death. This ‘Charlie And The Chocolate Factory-like’ incentive to inherit and control The Oasis is a world wide obsession but the puzzles to finding the keys are not so easy to work out unless you really get inside the mind of the creator. Wade and his virtual friends are among those looking but the stakes are high as the underhanded IOI corporation has hundreds of people on their payroll  looking for the same clues in order to inherit The Oasis and monetised it, turning it into an advertisers delight. They will stop at nothing to get the prize and... that’s the plot in a nutshell.

And along the way you’ll meet and not have nearly have enough time to spot all of the gazillions of cultural references scattered around the film in small or sometimes very large cameos. You’ll see Batman, the Back To The Future Delorean, the 1960s TV Batmobile, King Kong, The Iron Giant and so much more. Including a starring sequence from... Mechagodzilla... and this was my favourite surprise of the film even though it wasn’t a man in a suit but a much more flexibly moving CGI equivalent.

There are many nice touches but I’m a little bit puzzled as to why Alan Silvestri’s score is being touted as totally original and non-referential musically when, frankly, there are a number of famous musical moments which refer back to stuff as much as the movie does visually. For example, a nice idea of a ‘Zemeckis cube’ which reverses time for a period has a moment from Silvestri’s own Back To The Future scores and at one point during the sequence where The Iron Giant fights Mechagodzilla, we hear Akira Ifikube’s famous Godzilla march woven into the score. I’m actually not the biggest fan of Silvestri to be honest (although I did love his score for The Mummy Returns) but it’s nicely done and, though referential, it’s not nearly as overcooked as it might have been and it holds its own with the images and gives them the required lift.

In all honesty, this movie does play out pretty much, in terms of the plot goals too, like you’re watching a fast speed, live action version of The Lego Movie (reviewed here) but it has a little less charm, perhaps. There are quite a few dull moments in terms of the action choreography too but there are also some great sequences worth going to see it for.

The first run through of ‘the race’ near the start of the movie, for instance, deserves all the enthusiastic film reviewer roller coaster analogies it might get because it really does feel powerful and big (and just about followable, in terms of the way it’s edited). Another favourite sequence is where the characters have to go into the Overlook hotel from Stanley Kubrick’s famous adaptation of Stephen King’s The Shining. This was really well done and, in terms of the music, does have some of Wendy Carlos’ score from the movie (frustratingly still unreleased commercially on CD... although a ‘promotional’ boot does exist). This sequence is nice and also was one of the best for making me think I did, indeed, spot a key Spielbergian signature when I saw The Post earlier in the year...

To explain, I realised that sometimes, instead of following the main protagonist, the camera will suddenly split away and start following one of the other characters instead for a sequence before returning to the rest of the plot. Kind of like a little detour but one which helps highlight the next story thread/motive for the main characters to pick up on later and this is exactly what happens in The Shining sequence here (and in a few other places too, I might hasten to add). We take a bit of a ride with one of the other characters as they’re subjected to some of the famous set pieces of Kubrick’s masterpiece and, frankly, it left me wondering how Spielberg could get away with showing all this stuff from The Shining here in a film which has a 12A rating when I’m pretty sure it’s these same sequences that would have earned Kubrick’s film an X certificate back in the day. Hmmm... not sure what’s happening here.

All in all, Ready Player One is not a bad movie and it does have some lovely moments. It’s also a bit lumbering and, frankly, could have done with being trimmed by a good half an hour or more, I reckon. However, it’s quite possibly something which might grow on me a little more at a later date so I’m not ruling out a revisit at some point in the next few years. It’s certainly nowhere near to being one of Spielberg’s best films, as far as I’m concerned but it’s still a heck of a lot better than stuff like ET and AI, that’s for sure. I suspect I’m a little too old for a lot of the references but it will be a nice nostalgia rush for people in their late 30s is my guess. Give it a go if there’s nothing else going on, is my advice.
Posted by NUTS4R2 at 18:26