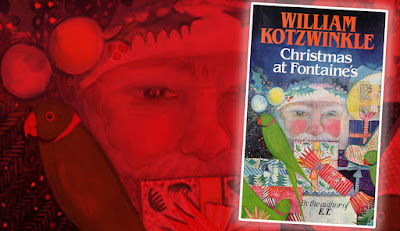 Wow. Sometimes it’s not the best idea to go back to something you loved as a teenager.

Christmas At Fontaine's was a book I read around about 1984. I spotted it in December in my local library, back when libraries were all about books and knowledge as opposed to computers and misinformation. I picked it up, not because of the jolly Santa pictured on the cover... at 16 years old I was not into Christmas nearly half as much as I am now... but because I recognised the writer’s name. William Kotzwinkle was, after all, the guy who had written the novelisation/movie tie-in for E.T. - The Extra Terrestrial. I don’t know why this resonated with me so much because I really hadn’t liked the movie (although I’d bought and read the book) but it was at a time when I still hadn’t figured out what parasitic, hand me down form of art the ‘novelisation of the movie’ is and, well, don’t judge me... I guess I didn’t know any better.

Anyway, I borrowed Christmas At Fontaines and read it and, then my dad read it also. We both loved it at the time but I couldn’t remember why we’d liked or indeed, recall hardly anything of the content of the novel as the years streamed past us. All I remember is that we both bonded over it and loved the decision, by one of the shop window display technicians who is a character in the book, to decapitate the reindeer in his attempt to make his window display something approaching ‘high art’. That’s all I could remember.

Perhaps that’s all I could remember because, reading it now as an adult, the book seems somehow slight and less engaging than it once did.

The action of the story, such as it is, follows a number of employees (including the owner) of a big ‘Selfridges style’ shop in New York called Fontaine’s. Plus, one other character who wanders the city outside as a bag lady and who spends all of her time in the book living out a distorted perspective of the world, projected by her own insanity.

So we have her, the two high tech window dressers, a lonely woman from kitchenware  and her lacklustre pursuit of the child hating manager of the toy section, Fontaine the owner, a tramp who is employed once a year by the store to be their Santa Claus and the security guard who spends all of his time trying to catch a person who has been living in the store overnight in the week leading up to Christmas. This last is the mystery at the centre of the book... is there a Christmas miracle going to happen here in this, frankly cynical and jaded view of the world that the author conjures up for us? Is it Santa himself, perhaps, disrupting the store after closing time?

Alas, the general grimness of the attitudes of all of the characters in this book pretty much clinches it that, unlike my apparent enthusiasm for them when I was in my teens, I really can’t find anyone to latch onto as a genuinely likeable character and so, since there is no real Christmas miracle at the end of the story, only a brief illusion of one, if indeed the story could be said to have an ending at all, then I found myself... not so much disappointed by the ending rather than, lets say, accepting that it rewards my lack of engagement by not delivering much of anything at all. A conclusion during which  some, though not all, of the characters find temporary respite from their day to day concerns and frustrations.

It’s well written enough and Kotzwinkle certainly knows how to pull the reader into the protagonists’ heads but, ultimately, there’s not all that much of these characters I could really feel was worth knowing about and so there’s nothing, for me at least, to empathise with.

Funnily enough, I talked to my dad about the book again this morning and he said he’d tried to read it again a few years ago but found it oddly disappointing. Maybe the book then, I think, is one which is perhaps very much ‘of its time’. I can certainly admire Kotzwinkle’s wordage and what I think he was possibly trying to achieve with this novel but, out of context of reading it at the time of its release when, it’s sad to say, the world seemed to be a much simpler and easier place to navigate, it just doesn’t seem relevant anymore.

Still, this is my Christmas novel for this year and I’m not saying its a bad tale by any means. It’s just not got a lot of weight to it, I felt, despite the grim fears, anxieties and broken dreams of the co-protagonists. Christmas At Fontaine’s is a seasonal novel set in a big department store so, if you want a Christmas vibe to your reading it’s definitely worth considering giving this one a look sometimes because, frankly, one man’s disconnect is another man’s Shangri La and, you know, books about the yuletide season are definitely outnumbered by everything else out there. So there you have it, William Kotzwinkle’s novel is a slice of jaded cynicism looked at through whimsy tinted glasses... if that’s what you’re looking for at Christmas then, why not give it a go?
Posted by NUTS4R2 at 19:54