The Saint’s Return (aka The Saint's Girl Friday) 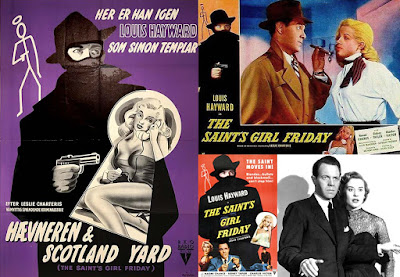 I’ve remarked more than once that my favourite actor to embody the famous Leslie Charteris character The Saint has always been Louis Hayward. Now that’s alway been on the strength of his performance in the RKO entry The Saint In New York (reviewed by me here). He stopped after one movie and George Sanders took over for a while before Hugh Sinclair pretty much finished the series off (although he was starting to grow into the role I think).  Hayward did, however, return to the character 15 years later in a movie made in England by Hammer Studios, who would soon become quite famous for their horror movie output. Now I don’t recall if I’ve ever seen The Saint’s Return before, which does try to be a continuation of that original film series and, indeed, the film was briefly distributed by RKO for Hammer in the US, under the title The Saint’s Girl Friday.

The film starts off with a high speed car chase as a woman is killed when her car is forced of the road by nefarious bad guys. And when I say high speed car chase I mean a ‘not that fast’ car chase with some obviously sped up footage, in this case. We then find The Saint flying back from the US and Inspector Teal, played here by Charles Victor, receiving a telegram from his American counterpart Inspector Fernack (sadly unseen in this film) to warn him of that fact. When we catch up with Louis Hayward’s soft spoken version of The Saint, he has his valet Hoppy with him (played by Thomas Gallagher) and from him hears the news that his old lady friend who had contacted him to come to England to help her has died, courtesy of the car chase at the opening of the picture.

This news obviously fires up Simon Templar but the brilliance, still, of Hayward’s performance is that this anger at the death of a friend is conveyed mostly by body language only. Hayward remains soft spoken throughout the picture and his rage is a smouldering undercurrent, punctuating the actions of his adventures while he offers opinions and advice to his enemies. This adventure is a pretty standard plot involving gambling IOUs and revenge against the people who killed the lady who brought him to London in the first place. I’ll say no more of the plot here other than it has a kind of neat twist reveal on the secret identity of the ringleader of the mob of gamblers which I actually didn’t see coming. So I should be happy about this, right?

Alas, I wish I could say this is a good movie but it’s actually quite a bad one. And it really shouldn’t be. Hayward seems to just stroll through his performance because, frankly, the script just isn’t as clever or witty as those earlier Saint movies and the action choreography on the few fist fights there are is quite lethargic and neither looks, nor feels, like anyone here is in any danger. Now there are a lot of great British actors and actresses who turn up in minor roles here including such notables as Sydney Tafler, Sam Kydd and the glamourous (as she was then) Diana Dors and this should all be enough to save the day as far as this film is concerned but... it just doesn’t. Doctor Who fans might like to note that there’s even a smallish role for William Russell in the film, going by his real name of Russell Enoch, ten years before his famous role as Ian Chesterton, the first Doctor’s companion, made him a household name for a short while.

Ivor Slaney’s score does it’s best to feel like it’s a ‘proper’ Saint movie and he incorporates the much disputed Webb/Charteris melody which was still in use for Ian Ogilvey’s run on the character in the 1970s but... yeah, the music really doesn’t lift the picture as much as one might like. The film is as short as the more recent of The Saint films prior to this but it still somehow feels somewhat padded and, in some ways, just like watching a TV episode. Indeed, the director of this would go on to work with Hayward again the following year on a TV incarnation of the US Lone Wolf character... I’ve never had the opportunity to see any of the Lone Wolf films or TV shows over here in the UK (no, not the Japanese manga character) but, from what I understand, he’s pretty much another variation on Simon Templar anyway (much like The Falcon was, if memory serves).

This film made me think of Timothy Dalton a bit and the two James Bond films he made. I think Hayward is in the same position as him. Timothy Dalton made only two James Bond films... The Living Daylights (reviewed here) and Licence To Kill (reviewed here). The first of these two was absolutely spectacular and got me back into appreciating the Bond character again... the second of these two was a terrible, terrible movie which actually put me off watching the Bond films for a long time until the wonderful Goldeneye. The point is, although Licence To Kill was an awful film and hard to watch, Dalton was still giving an absolutely solid performance as Bond, he just had a useless script to work with. I think the same thing could be said of Louis Hayward and his two movies for The Saint series. He jump started the franchise with an absolutely brilliant film, The Saint In New York but when he finally came back and did a second one, well, the script and direction just seems to have let him down. I can kinda see why Hammer or RKO have never made this one available on DVD or Blu Ray but, as awful as it is, one of those companies really should have a think about doing a commercial release of this one. It needs to be out there for people to see.

As for me and The Saint... well, I don’t plan on revisiting any of the TV shows anytime soon but I am curious to see what Val Kilmer did with the role in the most recent cinematic version of the character. Before that, though, I’d really like to see the two French movies made in the 1960s so, if anyone knows where I can track down copies of these with English subtitles, please let me know. As for The Saint’s Return... there are much better places to start on in the series than to try and sit through this one.
Posted by NUTS4R2 at 18:13