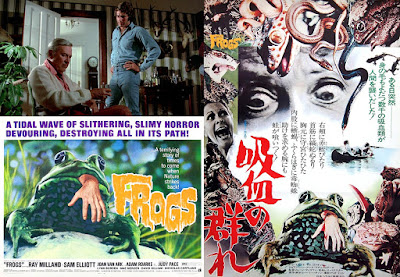 Each Spawn I Die

Warning: There are spoilers in here but the real thing I’m warning you about is ever attempting to watch this movie.

Wow. So I’d seen Frogs popping up quite a lot over the last few years on Twitter and when I saw the UK Blu Ray release at a ‘bargain basement’ price sporting a cover depicting a giant frog with a human hand in it’s mouth, hovering over a woman drowning in quicksand, I was pretty sure that this would be the kind of ‘so bad it’s good’ movie that I like to look at every now and again. Alas, having now seen it and finding it to be, so bad it’s nearly unwatchable in its dullness, I can’t help but think that the company putting this one out should be paying their customers to watch this one.

Okay, so first things first... it’s kind of a curio in that it features two legendary actors, one nearing the end of his big screen release career and another who had only been acting for around five years when this thing was made. So on the one hand we have Ray Milland playing Jason Crockett as the head of a rich family who gather for a couple of weeks every year for his birthday in his island mansion in Florida... and on the other hand we have a young Sam Elliot, playing a freelance eco photographer with the unlikely name of Pickett Smith. It’s Smith who we trail through an extended credits sequence as he rides his canoe around the swamps and waters of the island as he takes photographs depicting the evils of human pollution and its effects on the local ecology. Little does he know that the local ecosystem is about to bite back hard on human kind... oh wait... let me be straight about this in a way that the people who marketed this film aren’t... Little does he know that the local ecosystem is about to mostly mind its own business while people seem to just die around it in completely avoidable and preventable ways.

This is the truth you need to know before delving into the almost unwatchable dullness that is Frogs... there are absolutely no deadly frogs in this movie. Oh, sure, there are hundreds of frogs here, most of whom apparently fled their captivity for good and went off to do their own thing while making this movie, escaping their handler and returning to the wild. Yeah, gazillions of frogs... there’s just no frog death or, really, any kind of death remotely connected to our amphibious friends. And, bearing in mind how it’s been promoted, the film-makers must have felt pretty guilty about this I reckon because, right at the end of the closing credits, there’s a quick animation of a frog swallowing a human hand, just like on the poster. A kind of token afterthought to at least attempt to somehow tie it in to the sales pitch, I would guess

Instead, what we have are snakes, crocodiles (or possibly alligators, I can never tell), surprisingly deadly spiders, lizards, birds, a token scorpion, poisonous fumes and... in one notable case... a half decent sized turtle. There are no special effects with any of these creatures, they are just normal sized versions you can find in real life and with a lot of edits and placements to try and convince us that they are purposefully interacting with the various members of the Crocket family, who inexplicably wander off on their own to do something and then run afoul of the ‘pollution mad’ beasts. Plus a lot of frogs are just thrown into shot every scene so we don’t forget the movie is called Frogs, even though said frogs seem to have absolutely no input on the course of the story although, it has to be said, that in most cases they are better actors than a lot of the human performers in the film.

So, yeah, people will just run about the swamp, get scared by a snake, run off somewhere else and then fall, stumble around a bit and then get bitten. Or, as in the case of a greenhouse victim, some lizards will knock over various bottles labelled with words like ‘poison’ and then, when the somewhat naive guy goes to investigate what’s going on with all that toxic smoke, he coughs a bit and dies from... I dunno... slightly lizard related injury I guess. One of the ladies was supposed to fall in quick sand and die and you can actually see this death in the trailer (not to mention the poster) but it was then deemed too tame so, instead, she runs through the swamp, stumbles around a bit and then gets bitten and, because she has been bitten by something, her face turns somewhat green (in some of the shots).

Other deaths include a woman who succumbs to being in the water while... I think... we are supposed to surmise a turtle has somehow bit her to death but, perhaps the most ridiculous way a person ‘croaks it’ here (and it’s a film filled with ridiculous excuses for death scenes, as you can see) is when a guy stumbles and falls in the general vicinity of a few tarantulas (or other venomous breed of spider). Somehow, these tree dwelling creatures manage to cover said, quite unnecessarily squirming figure... just get up man!... with a web in less than 30 seconds. An apparently strong web which looks, really, just like somebody got some clumps of dried, non threatening grass and thrown them on the guy. Hang on... I think I might have just discovered the secret of the not so special effects in this movie. This looks so unconvincing and when the spiders are dropped onto the guy, he takes a long time yelling in an effort, I think, for the film makers to have something to pad the already dull running time out.

And in between every scene or transition, shots of watching frogs are inserted to continue to remind the audience of the title of the film, although I can’t imagine why they would call it that in the first place when there are no killer frogs anywhere in the picture.

Another completely pointless death is the protracted... “oh wait, we forgot to tie that bit up so lets go back to it after we’ve already had the concluding scene of the movie” moment where Ray Milland’s character, left alone in his mansion, is killed by... um... I dunno. I think he has a heart attack maybe just from being in the presence of a whole host of lizards and snakes. He’s wheelchair bound but you’d think this would just make him faster but, no, he somehow seems to die of complete startlement anyway. Well, I say he dies but apparently, Milland was so sick to death of the production by this point that he stormed off the set three days earlier than he was supposed to and a double had to be used for some of the shots in that final sequence. So there you go... not sure if it was a happy set or not but, I guess, for Ray Milland it certainly wasn’t.

And, there’s not much else to say about Frogs. Apart from a nicely over the top Les Baxter stinger when the first, harmless frog comes on the screen and a J&B sighting which just made me think I would have been better off watching something Italian, Sam Elliot as a young actor is about the only interesting thing in this movie and even his smile can’t stop this film from being a deathly dull watch. I wouldn’t, I have to say, wish the movie Frogs on anyone, even connoisseurs of B-movies... it’s that boring and energy sapping. Sure I’m glad I saw it because, with a stupid poster like that it would have been a lifelong regret if I hadn’t. That being said, I’m not sure if that outweighs the regret of having to shell out £6 for this thing in the first place. This was not the fun movie I was expecting it to be... avoid at all costs.
Posted by NUTS4R2 at 19:45