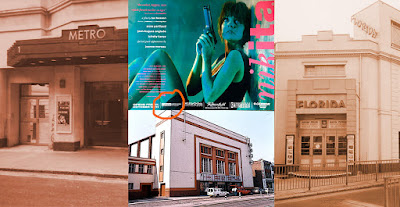 Lost Cinemas Of My Youth

Well, my next hundredth post has come around again and, as usual, I couldn’t figure out what to write for my 1700th. And then I thought back on the incredibly sad post I had to write a few weeks ago. Regular readers might remember my memoriam piece for my best friend Kerry (you can read this here). This got me to thinking about some of the cinemas I used to frequent in my youth and how the majority of them have disappeared over time... or in the case of the Everyman, Hampstead... become a shell of its former self, lacking the charm and appeal of its previous incarnation.

So here then, for those interested in such things, is a brief rundown of some of my more pleasantly remembered haunts which, I dunno, some of my readers based in these areas might remember.


Lumiere - St. Martin’s Lane, London.
Okay, so the Lumiere cinema was the favourite film watching location for both me and my friend Kerry. The cinema of choice for an all round quality experience. This was a huge screen, the kind usually reserved for Hollywood blockbusters and showed only first run Foreign movies, intermingled with the occasional British movie (like Truly, Madly, Deeply... before it was ever screened on TV) and the occasional American independent movie (I think I saw Hal Hartley’s Amateur there about four times). It was a quality establishment with a box office on the ground floor including the odd merchandise too, plus VHS video cassettes of films by the likes of Palace Pictures and Artifical Eye. I bought a BodyMap branded long sleeved sweat-shirt of a very unusual design based on Luc Besson’s Nikita there when we saw the film on its first run (many times over... if you were going to see a movie like Nikita, this was the place to see it). As you moved downstairs to the lobby outside the auditorium, there were big framed posters of important, previous films shown there such as Andre Tarkovsky’s Nostalgia. And outside the cinema, on the columns where in the old days they might have put lobby cards, were big blow ups of reviews of the film which was currently showing, taken from a number of different newspapers and magazines. So you could read up on the film to figure out if you wanted to buy a ticket or not. More often than not, the reviews were nearly all good because of the high quality of the films they chose to show there. I think it’s a gymnasium now... I really miss this place.


Metro - Rupert Street, London.
Formerly ‘The Other Cinema’, as they were again briefly before they finally closed their doors for good, the Metro near Piccadilly was the next best favourite for Kerry and I. They showed exactly the same kinds of films at the Lumiere on, perhaps, a slightly smaller screen. If there was a big French or German film out at the cinema, for example, which was playing at the Lumiere and which happened to coincide with another big Foreign Language release (we were lucky in those days, not everything that played in cinemas was exclusively big budget Americana), then the Metro would probably be showing the other one instead. So I remember seeing multiple screenings of The Hairdressers Husband at the Lumiere while, during the same period, having to see repeat screenings of Merci La Vie at the Metro (although I think they swapped out the two movies at one point). The last film I saw there was In My Skin and I was wondering why there were only a few people there for it on a Saturday afternoon. I guess it closed through diminishing audiences but we used to love it.


Odeon - Swiss Centre, Wardour Street, London.
Ahh. The little cinema built up the top of the Swiss Centre in London (now demolished to make way for... an M&Ms sweetie experience?)... was our last resort stop in London. There were some other cinemas which we used to go to as well but, more often than not, this one usually had some good Foreign movies playing which just weren’t screening anywhere else. I remember it was tiny and not worth the money but... it kinda actually was worth it because, where else were you going to see the movie if none of the other cinemas in London were showing it?


ABC Cinema - Savoy Parade, Enfield.
This was the nearest cinema to Kerry and I. Formerly the Savoy Cinema and then, after the ABC, a Canon cinema, most of the films I watched as a kid and teenager were shown here. I think the first time I visited it (a few years before we moved house and lived just around the corner from it... which we still do although it’s now a TESCO) was to see one of the all time greatest movies of my life, Doc Savage - The Man Of Bronze. I remember the last film playing there while it was still a single screen was Star Wars (from early 1978... I’d seen it at the tail end of 1977 at the Dominion in London). I remember it literally played on the one screen there for months and months... possibly three quarters of a year, before they closed for a little while and converted it into one of the first multiscreens (presumably with the profits from Star Wars, which was attracting the most repeat performances anyone had ever seen at the time). After this, many posters used to adorn the special frames outside including a lot of British and American sex movies, often on double bills. Scanning these as I walked past the cinema on the way to school each morning was an eduction in itself. In later years I became friendly with the people working in the cinema and my cousin and I used to join the staff in the projection room for a chat. I might have had the odd dalliance with more than a couple of the usherettes at various times too, over the years.


Everyman - Hampstead
Once known as ‘the oldest repertory cinema in England’, the Everyman Hampstead is the only cinema I cover here which hasn’t been demolished or converted to something else. It is, in fact, still a cinema. This was a brilliant place showing loads of old films from all over the world every week. I saw some real crackers here, including a screening of Blade Runner with Rutger Hauer in attendance. Alas, although the cinema is still there as a cinema, it’s added at least one more screen and is mostly just showing the latest US releases. This establishment is no longer the cornucopia of international cinema it once was and I’m really upset they’ve let it fall into this sorry state.


ABC Piccadilly - London
During the 1970s this little cinema, which had many names over the years, where you had to walk downstairs to get to the screens, was situated right near Tower Records (as it came to be in the 1980s for a brief but happy decade or so). For a long time this mostly used to show sex movies but I went there as a kid to see a double bill of Creature From The Black Lagoon and It Came From Outer Space in 3D, with the proper, old-style red and green glasses. In later years it started showing things like first run foreign movies so it was always worth a look at what was playing.


Regal - Angel, Edmonton
I think I saw my first cinema Bond here, Live And Let Die, back in 1973 (about a year before this fine cinema closed its doors for good). I liked it so much (despite biting all my nails off when I watched it) that my parents took me to all the Sean Connery Bond double bills which started doing the rounds shortly after... most of them screening here. Even at this age I could tell because of these screenings, when films like Thunderball finally made it onto UK TV, that they had been mercilessly cut by the channel showing them (and still are to this day).

Florida - Enfield Town
I used to go here as a very young kid and it was a really nice place. Don’t remember too much about it but I remember seeing a double bill here where I fell asleep during the first movie, The Neptune Factor... but woke up for the second movie, Battle For The Planet Of The Apes. I think I may have seen one or two of those early James Bond double bills here too.


And that’s my brief look at some of the cinemas that me... and sometimes Kerry... would call our own. I hope you enjoyed this little summary of my mis-spent youth and hope you to continue reading this blog after its 1700th post. As always, I appreciate my readers.
Posted by NUTS4R2 at 16:02