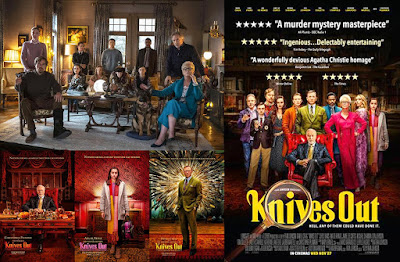 I really enjoyed the earlier films of Rian Johnson and absolutely adored his 'high school mystery told in the vernacular of hard boiled detective fiction' movie Brick. I also thought Looper was quite good. When I’d heard he was on board with a Star Wars movie I was kinda nervous because, from the evidence of these two works, I really didn’t think he was a good match for he project. Turns out I was right too. Although not completely unwatchable (no Star Wars film has been so far), it made the mistake of having a few nicely done and appropriate set pieces kinda grafted on to a story that was possibly one of the least ‘Star Warsy’ we’ve seen to date. So, as far as I’m concerned at least, The Last Jedi kinda ranks right at the bottom of the pile with Attack Of The Clones and Revenge Of The Sith.

However, I was really looking forward to seeing what he was going to do next and was delighted when another mystery story... this time in the vein of those old Agatha Christie ‘Whodunnits’... called Knives Out, was announced. I was also pleased to see it getting a very positive response on the internet too. Alas, the first warning I had that the film might not be ‘all that’ was when two of my real life friends, both who had seen the film at different times in different towns, both told me it was... well... kinda disappointing. That being said, I was still looking forward to the film enough so that, when I saw it, I was indeed disappointed with the end result.

Johnson has assembled a pretty impressive cast with the likes of Daniel Craig (good actor, bad Bond), Toni Collette, Jamie Lee Curtis, Michael Shannon, Chris Evans, Don Johnson, Frank Oz and Christopher Plumber. There’s also a brilliant young actress who I’ve not seen before called Ana de Armas playing the lead character, as becomes clear as the movie progresses. I was always going to be a sucker for whoever was going to be playing this character, to be honest, because she’s written as one of those people who truly are ‘pure in heart’.

The style of the film takes exactly the form that one of those old, ‘gather up all the guests’ whodunnits would have taken and the story, it has to be said, emits a strange and, perhaps, ‘welcome to some’ air of snooziness as it plays out in front of the eyeballs. There’s nothing really offensive or in your face about the movie at any point in the proceedings and, if this floats your boat, then it’s definitely like a Christmas movie that you can fall asleep to after dinner.

And that’s pretty much the only good stuff I can think to say about it.

The real problem for me was that... the film feels kinda uneventful and a little bit like the cast and crew were having a far better time with the material than the audience were ever going to. There are no real surprises in this movie either and though it’s certainly a little twisty-turny as the film continues on its merry way, there aren’t really any revelations in store for anyone either. So even though the story line seems quite fluid for a lot of the time, it still, I’m sad to say, manages to telegraph itself a lot as we follow Ana De Armas trying to dodge an explosive situation which she has, it seems, partially created.

The other thing which I was disappointed by, in all honesty, was the brilliant cast. I mean, you have all these truly wonderful actors and actresses and most of them seem to be just wasted in their roles. It was nice to see people like Chris Evans and Michael Shannon playing against type but, mostly, some really famous people seem like they’re a little relegated to the sidelines and I couldn’t help but think that a lot of these 'A List' performers could have been replaced with relatively unknown people and the studio could have saved themselves some money.

Nathan Johnson provides a score for the movie which is a throwback to those 1960s and 1970s genre films that the director is trying to emulate and is completely appropriate to the on screen visuals. That being said, it didn’t really do a lot for me and I did find it a step down from his absolutely amazing work on Brick. The score for Knives Out doesn’t really stay with you after the movie and, even though I am writing this less than 24 hours after seeing it, I can’t remember much about it, to be honest. It fits the film and probably elevates it but I can’t imagine trying to listen to this one as a stand alone musical experience.

And... yeah... sorry for the short review here but I really don’t have much to say about this one. Knives Out is a competent and unobtrusive little movie which kinda strolls along at its own sleepy pace but never really, as far as I’m concerned (and I know I’m in a minority here), strays into the great or even ‘wildly entertaining’ category. If you like old style whodunnits and want a movie you can relax to without needing to worry you’ll be caught off guard, then Knives Out is probably just for you. As for me... I’m just grateful I don’t have to ever sit through it again.
Posted by NUTS4R2 at 17:59