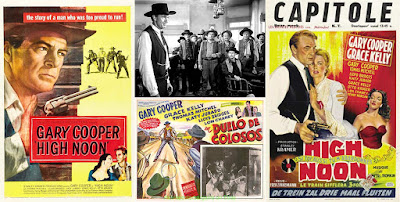 High Noon really is one of the all time great American Westerns. It’s been a fair few decades since I’d watched it last (I used to love it as a kid) but I recently bought my father the new Eureka - Masters Of Cinema Blu Ray and, of course, I sat down to watch it with him. I was blown away all over again by it’s stark, black and white photography, the driven Dimitri Tiomkin score with the important song Do Not Forsake Me Oh My Darling and some interesting actors doing their thing - including Gary Cooper, Grace Kelly (later Princess of Monaco), Katy Jurado, Lloyd Bridges, Lon Chaney Jr (the monster man is billed here as simply Lon Chaney, for some reason), an uncredited Jack Elam and, not forgetting, the screen debut of one Lee Van Cleef... as one of the four men gunning for Cooper’s Marshal character Will Kane.

Actually, I have to say, I didn’t realise this was Van Cleef’s debut until after I watched it again and looked him up. I mean, it’s a pretty rare debut. Okay, so he’s not the bad guy... Frank Miller (played by Ian McDonald) or even the main villain of the three gunfighters waiting for Frank to return to town on the noon train (that would be Frank’s brother Ben, played by Sheb Wooley)... but he has a large portion of the opening credits solo, while he gets ready and joins the other two gunmen to ride to the railway station. He really looks like a villain and, with his scarred face and wild eye reactions, which feature a couple of times in the film, I have to wonder if Sergio Leone maybe looked at this film long and hard over the years before making the actor a household name and using him in two of his famous Spaghetti Westerns. When we think of those Leone movies, we think of the stylised poses, the expressive eyes and the constant waiting and... well, it’s all here in High Noon, long before the Italians started doing it, mostly, better than the Americans. Or at least as interestingly. As the three wait for the train, you will certainly be reminded of Leone’s later masterpiece Once Upon A Time In The West and I would bet this is one of the films he looked at for inspiration.

The plot, if you’ve never seen the film before, goes something like this...

Will Kane (Gary Cooper) marries his quaker lover Amy (Grace Kelly) but finds out that the murderous Frank Miller has just been released from jail (from up north!) and is returning on the noon train to get together with his fellow thugs to gun down the marshall in an act of revenge and then, as implied, take over the town with their hoodlum ways. The town’s folk try to get Mr and Mrs Kane to leave in a buckboard but Kane soon turns back to pick up his tin star (the new marshal doesn’t get into town until the day after) and try to get help to fight off these four cold blooded killers in an attempt to protect the community. Amy doesn’t understand this course of action and tells him she will be on that noon train when it arrives. His former girlfriend, the Mexican Helen Ramírez (played wonderfully by Katy Jurado) also ends things with the marshal’s deputy, played by Lloyd Bridges. She is also set to leave on the noon train.

Meanwhile, in a searing metaphorical indictment of the Hollywood anti-communist black list as experienced by one of the producers about to be put on that list, Kane calls on the various friends and acquaintances in town, only to be met with inaction or untenable conditions to the required help. Bridges character quits over the matter and, even the one man qualified enough to help, changes his mind just before the villains show up. Which leaves just Kane and, as one of two strong female characters in the film, his wife Amy... who shows up to aid him in ways which I won’t spoil for you here if you’ve never seen it.

And it’s a staggeringly good movie. There are probably a fair few moving camera shots in the film but the absolutely beautiful 1.33:1 black and white photography set ups coupled with the pacing make the film appear static and, it has to be said, feel somewhat claustrophobic, as the characters and audience count down the minutes until the train gets into town. Which is something the audience can actually do in this film because, aside from some stuff at the start (and we’re only talking minutes), the entire film is shot... or at least edited... in real time. The various shots of clocks of all shapes and sizes included in the visuals to give you a constant reminder (and surprisingly accurate one, considering how a Hollywood movie is shot) of just how long you’ve got until the shooting starts... underlined by the fairly regular, tick tock percussion of the main title theme which, actually, I think was the first time a movie song had been written into the actual score to add emphasis. Can you imagine a Bond film that didn’t do this? Well, okay, there have been a few of them over the last decade but they’re all the poorer for it.

It’s also a film of mounting tension and unsaid or understated plot points. Nothing is directly said and, though there are some dense sections of scenes heavy with dialogue, a lot of the film plays out like a silent movie in terms of lack of conversation and it’s stronger for it (something else I suspect Sergio Leone learned from films like this). For instance, it’s never explicitly stated that Helen is the marshal’s ex but, as various comments are thrown about a picture is painted that she has history with the main antagonist of the film and you can piece together that the main protagonist, Will Kane, got her out of some problems before hitching up with her himself. It’s something an audience can sew together in their mind, just as Will’s new wife Amy does about half way through the film.

So, yeah, brilliantly minimal but carrying a lot of meaning in a way which almost seems a forgotten art in Hollywood nowadays, where teen audiences have lit a fire which ignorantly blazes through the subtlety of the art of cinematic implication and helped boil things down to a lowest common denominator of clear but stifling explanations and clarifications before the latest heroic incarnations can even get their clothes on. In this way the film is, perhaps, of its time but, honestly, it also feels strikingly timeless, especially with it’s criticisms of the common people on the street failing to do their duty and arguing their way out of harms way by justifying their stance in inventive rhetoric which never, quite, seems all that convincing.

And that’s me done on High Noon. One of the all time great movies that Hollywood ever put out and as entertaining a film as you’re likely to see. It holds up really well over the years and this new Blu Ray from Eureka is stacked with some interesting extras which, alas, I probably wont have time to watch for a very long time, if ever. But, as a recommendation, my dad absolutely loved it too and so do I and I reckon it’s a ‘must see’ for any fans of the art of the medium in general. Do not forsake this new release of an all time classic Western because, honestly, you’d be missing out.
Posted by NUTS4R2 at 16:52