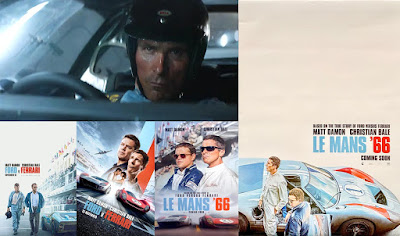 I’m not really into motor racing to be honest... heck, I didn’t even know, until watching this film, that the Le Mans race runs for 24 hours non-stop with relays of drivers. However, I don’t mind the odd movie about the subject such as Grand Prix or Rush (reviewed here) and my dad certainly loves the sport. So, you know, I missed this one at the cinema but caught up with it on Father’s Day.

I honestly wasn’t expecting great things from Le Mans '66 (Ford V Ferrari) but I was expecting it to be a competently made, heavily dramatised story about ex-driver and car designer Carroll Shelby (as played by Matt Damon) and English driver Ken Miles (played here by Christian Bale). Mangold is a pretty solid director too so I wasn’t expecting anything less than an okay time with it. Having seen the trailer it looked like one of those films which ‘does what it says on the tin’, as the saying goes and, certainly, if you have talent like Damon and Bale in a movie... then you’re certainly stacking the deck in your favour as a director.

So, yeah, it absolutely did the ‘tin thing’ and what we have here is a nice looking film with an aesthetic of making what could be fairly standard, boring shots of driving look both beautiful in certain places and downright gritty and ‘in your face’ for a lot of the time. It feels like you’re right in the seat next to the drivers in this and Mangold has an absolute knack for giving this kind of subject matter the excitement it needs.

Now, a film like this is normally going to be the standard collection of Hollywood clichés and blown up dramatic moments and with a plot like this... which retells the story of how, in the wake of an unsuccessful merger bid by Ford to buy out Ferrari, the head of Ford (the grandson of the original Henry Ford) hires Shelby to make a car that can run in Le Mans and beat Ferrari at their own game... you should probably be expecting a lot of them to turn up. So, yeah, a film ripe for all those things like the story of the people getting the car ready, arguing, bonding, the son and spouse (in this case) of the driver and his relationship with them, the trials and tribulations as one of them is sacked but then proved right etc. and... yep... I can confirm that all those kinds of clichés and dramatic summits are there.

This is a movie of terrible old clichés and souped up dramatic moments to be sure but, it’s also so well put together that it's the very epitome of all that makes the best of those kinds of films so successful. Yeah, there are no real surprises (even less, I’m sure, for those of you who know how one of these two people met their untimely demise in real life) but it’s a heck of a well put together piece and just as entertaining as you’d expect. The cast are all excellent, especially Bale and Damon but also people like Caitriona Balfe and Noah Jupe playing Miles’ wife and son. I was especially impressed with Tracy Letts playing the grandson of the original Henry Ford, who comes across as totally ruthless a lot of the time but also someone who is not necessarily going to be totally swayed by the grand standing idiots in his employ... he really won me over in a scene where he has a bit of a breakdown after Shelby takes him for ‘a little spin’ in his new racing car. This couldn’t have been that easy to perform and it comes across as a surprisingly powerful moment which, given the specific condition that hinges on the outcome of this scene, it really needed to be. Letts really nails it here.

Two other people who really nail it are Marco Beltrami & Buck Sanders. The soundtrack uses a lot of needle drop pop songs from the era (and also some in cover versions which weren’t yet around at the time, it has to be said) but the actual score itself is powerful stuff and, sadly, not available in CD form other than a couple of cuts on a song compilation (who wants a bloody song compilation?). The full score is only available in far inferior formats such as digital download or fragile vinyl but, alas, not on the medium of choice for people who care about stuff like this. So, yeah, as brilliant as it is, it looks like I’m destined to never hear it away from the film and that’s a shame because, if you’ll excuse the pun, it’s quite driven and has a relentless, pounding rhythm to it which really makes the scenes fly. Also, when the grueling scenes of the race through rain and thunder during the night are on, the way the music orchestrates and muddies up and attacks the rhythm with a kind of scuttling percussion (yeah, I’m not good on musical description but hopefully you know what that means), it completely complements the idea of rain hitting the windshield as wipers cut across the surface trying to swoosh everything out of the way. This is really great music and it’s yet another great crime against filmanity that the score is not available on CD. The record companies have got to stop doing this to us.

Okay, so great cast, well shot, great music and, also, nicely edited. You really aren’t going to get lost in the edit during the race scenes here and this is no mean feat when it turns out that the big race scene at the end was shot on multiple different courses all sewn together to ensure it matched the look of the real Le Mans course in 1966. That must have been somewhat challenging.

So, yeah, that’s me about done on this except to say that if you’re into the odd Hollywood style docudrama then Le Mans ‘66 (aka Ford V Ferrari, depending on which country you are watching this in) is a pretty good example of that kind of film-making and is certainly a fun ride, miles ahead of some of the other racing movies. If you’re expecting something unusual or quirky then this may be the wrong picture for you but, even for someone like me who doesn’t worship these big Hollywood box office follies like some, this is a solid film, well made and about as good as you’d have a right to expect from this kind of project. I’m really glad I saw it and I’m sure it’s going to be a staple of TV stations for many a Christmas or Easter to come. Definitely a big holiday movie for sure. Worth a look.
Posted by NUTS4R2 at 11:59