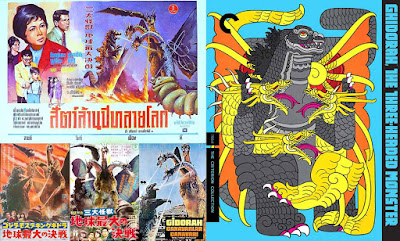 So this next kaiju movie, which I am reviewing as part of Criterion’s lovely Spine 1000 box set of The Showa Era of Godzilla films, is very much a direct sequel to the previous film in the series, Godzilla VS Mothra (reviewed here). That’s not to say things haven’t moved on a little in this entry, Ghidora - The Three Headed Monster, as we’ll soon discover but some of the characters (human and kaiju alike) recur and many references are made to the original film.

This one is directed, once again, by Ishirô Honda... who was responsible for kick-starting the series with his original movie Godzilla (reviewed here), as well as directing other films starring both The Big G and a variety of other monsters, such as Mothra (reviewed by me here). And like his previous kaiju eiga, this one has a very slow build up but, where that really seemed to hamper the previous film in the series, this one has a very entertaining plot which is developed over a half an hour before the first monster even turns up... in the form of Rodan (or Radon as he was know  in Japan... wish a legitimate Blu Ray release was available for this monster’s debut feature). In fact, this is probably the best in the series so far since the original Godzilla movie and it never once gets dull.

The opening titles are a bit strange, showing a series of 'moving to freeze frame' monster moments from the forthcoming movie and I can only assume that this was done because of the slow build up on this one (much like the inclusion of ‘home video footage’ of Godzilla in Godzilla Raids Again, reviewed here). In this case, the decision is not the best because, as I said before, the plot development on this one is quite interesting and holds its own against the forthcoming attraction of battling behemoths.

Okay, so lets get to that plot then. Characters and their relationships with each other are established very economically with some nice, catch all lines which make any subsequent patter redundant, so it cuts to the chase very quickly compared to some of the other dialogue writing in the series... for instance, the line when a character is asked if there’s "anything up" is followed up with the answer... “If so, your paper would be on it before us cops.” Stuff like this really moves things along nicely and cuts a lot of extraneous material which might have been there in an alternate approach.

Primarily, the film centres around the princess of a fictional country called Sergina, played by Akiko Wakabayashi. She was in a few of these kinds of films but Bond fans may remember her for her performance as Aki in You Only Live Twice, three years later. Everybody in Sergina seems to dress with big Elizabethan ruffles around their necks, making them look totally out of place in the modern world in which this movie is set. Even their briefly glimpsed military look completely strange, as they all appear to be dressed in bright red Santa suits. Thankfully, not many of the princess’ scenes are set in her home country and she is the unfortunate victim of an assassination plot as her plane explodes from a bomb planted within. Or, at least she would have been if a strange alien voice in her head hadn’t urged her to leave and caused her to jump out into a bright light outside the aircraft before it explodes... could this have something to do with the mysterious UFOs that Naoka, the other female lead played by Yuriko Hoshi, has been researching for her job on the upcoming TV show, Mysteries Of The 20th Century? Pretty likely, I would say.

Confusingly, Yuriko Hoshi was in Godzilla VS Mothra playing a similar but totally different character. It’s puzzling since another of the main protagonists, Professor Miura played by Hiroshi Koizumi, reprises his role from that same film. He is studying one of the ‘mysterious meteors’ with strange properties that have crashed in the area. Meanwhile, the Princess resurfaces as an uncannily true prophet, who walks around in an almost trance-like state warning people to flee, as she believes she is a Venusian who can see into the future. Which she kind of is actually, because the Venusian light thing that rescued her from the plane is obviously controlling her actions.

She warns people to keep away from a mountain, for example, just a short while before Rodan busts his way out of it. Then, after Godzilla goes on the prowl again, out of the blue, she also warns about the creature that's the instigator of the destruction of the Earth, King Ghidora, the three headed monster of the title... who promptly hatches in a strange, phoenix like manner from the mysterious meteor.

Meanwhile (again), Mothra’s tiny guardians, played once again by the pop duo The Peanuts (their third and final appearance in a Godzilla film), are in town for a TV appearance and we are informed that, of the two surviving Mothras from the previous movie, one has passed away. Which is a shame. However, when Ghidorah starts his rampage, The Peanuts summon Mothra (who stays in larvae state for the entire movie) to talk sense into the warring Godzilla and Rodan, in a sequence in which we see Mothra talking to them while The Peanuts translate for the benefit of the audience... and so the stage is set for an epic battle at the end of the movie where Godzilla, Mothra and Rodan team up to battle King Ghidorah.

While all this is going on, we have the cop trying to protect the transformed princess from a group of hit-men who have been sent from Sergina... so we have a Godzilla movie with some proper gun battles in it too, which wouldn’t, it has to be said, look totally out of place in a Seijun Suzuki movie. The second half of the film also features legendary actor Takashi Shimura in his last appearance in a Godzilla film, as yet another new character, Doctor Tsukamoto.

And... it’s a really entertaining movie and a lot better than how I’d remembered it.

The special effects on this one are great and even the scenes where live action and miniature work are blended look pretty good (as opposed to the previous movie). There’s a lovely shot too, where Godzilla rising up out of the sea is preceded by the backs of fleeing whales rippling the surface of the water... this is really nice stuff.

The sound design is a mixed bag though. Nice work with the silenced guns of the villains, so the heroes louder gun shot sounds have their own signature and you can hear just who is doing the shooting at any one time in a gun battle. I’ll never understand, though, why Rodan always seems to sound like a jet engine. That just never works for me.

Akira Ifukube provides a magnificent score for this one and uses his big, ponderous Godzilla main theme a lot. There’s even something like a theremin used for some of the UFO/meteor moments. Curiously, though, his big Godzilla march still doesn’t make a reappearance here, at least that I could hear. There’s a wonderful musical build up when we first see King Ghidorah attack a city and we see the people shutting up shops and fleeing.

There’s a big musical misstep here though, as far as I’m concerned and, yes, I know selling records would have been a priority here... but there’s a brand new Mothra song which The Peanuts perform in two scenes and, well, it’s just not good... although matched visually by some nicely montaged shot compositions, such as the heads of the two blown up large on either side of the frame, superimposed with the chanting natives on Infant Island sandwiched between them.

All in all though, Ghidorah, The Three Headed Monster is a really entertaining and rewatchable entry into the series and brings in the concept of space aliens and space monsters to the films, acting as a great prelude/set up to the next movie in the series the following year, which was always one of my favourites, Invasion Of The Astro-Monster.

It also marks a great turning point in the series because Godzilla starts off as a menace but, when talking to Mothra and revealing his reasons for his former behaviour... and then agreeing to team up and help protect the earth from King Ghidorah... he finally takes on the mantle of heroic protector of Tokyo which would pretty much stick with him for most of the following films in The Showa Era. There’s also a hint at how whacky and comical the character would become as his laughter and amusement at Rodan getting equally covered with Mothra’s semen-like silk is plain old slapstick, pantomime acting... it’s quite hilarious, as are some of the reactions the monsters have to each other during the fights. This is one of the best movies in the series, for my money but... the best was yet to come.
Posted by NUTS4R2 at 16:50