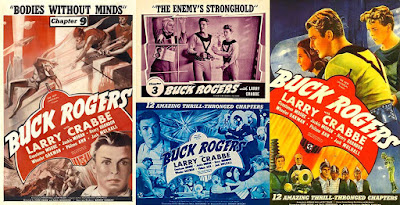 Buck To The Future

Between Flash Gordon’s Trip To Mars (reviewed here) in 1938 and Flash Gordon Conquers The Universe (reviewed here) in 1940, Larry ‘Buster’ Crabbe played another famous comic strip hero on the big screen... in addition to Flash, Tarzan (who was, of course, a pulp hero first) and Red Barry. This theatrical serial was Buck Rogers but, curiously, it wasn’t actually based on either the strip or novel itself (although the opening credits of every episode proclaimed it to be so) and instead the character was just grafted onto a different story and given a slightly different origin. In fact, it’s said to possibly be based on an illegally published, unofficial Flash Gordon story from 1936, in which he travels to Saturn.

Either way, it’s still a cool serial and, although it’s probably a little more pedestrian than the Flash Gordon ones in terms of a variety of locales and characters, it does suit the serial format quite well and in this one Buck is not alone in his situation. When his airship crashes in some snowy mountains and the hybernation gas invented by Professor Wade is turned on in the cabin, in case search parties can’t find them, his young friend Buddy Wade (the professor’s son) is also along for the trip into the 25th Century and they are both woken from their airship slumbers by the rebellion facing off against tyrant Killer Kane, hoodlum ruler of the Earth, five hundred years later. Unlike the newspaper strip, Buddy is not Buddy Dearing, a native of the 25th century and Wilmas's younger brother.

So joining Crabbe is Jackie Moran as Buddy Wade, Constance Moore as Wilma Deering, serial king C. Montague Shaw as Professor Huer (who we last saw as the clay king in Flash Gordon’s Trip To Mars), Philson Ahn as Prince Talon of the planet Saturn (where a good majority of the Saturnians, apart from the mutant slave race the Zuggs - with their rubber face applications - seem to be of Asian extraction... yeah, I’m not going to touch that one) and Anthony Warde as Killer Kane (who isn’t in it as much as a lead villain ought to be, it has to be said). There’s also Henry Brandon as prominent bad guy Captain Laska, who many may best remember ‘Asianed up’ for the title role in the 1940 serial Drums Of Fu Manchu, in ‘red face’ as Scar in the 1956 John Wayne classic The Searchers and as the old cop in John Carpenter’s original 1976 movie Assault On Precinct 13.

So the action takes place in just three locations which, in serial fashion, the hero and his companions travel to and from in various episodes... so the Hidden City of the rebellion (which is located in a secret mountain that has big doors disguised as the front of the mountain, allowing spaceships to fly in and out), Killer Kane’s technologically advanced city and, of course, the planet Saturn. And there are lots of things going on, some of which make no sense (there are a huge number of plot holes in this one) but, one of the big factors is that Kane has made a zombie-like army of human robots, by putting amnesia helmets on his enemies and making them susceptible to his orders (possibly an influence on the original TV serial version of Doctor Who - The Dalek Invasion Of Earth, by the looks of it).  Most of the set ups are obvious and, despite the expense of serials of this nature, there are a hell of a lot of recycled sets in this. Once obvious thing is that the bullet cars which work as an underground transit system on Saturn are the exact same ones that the Clay Men in Flash Gordon’s Trip To Mars used.

I mentioned in yesterdays review of Flash Gordon’s Conquers The Universe that George lucas took a lot of ideas from these serials and both the opening episode recap credit calls and the viewscreen focussing with accompanying sound effect are again in evidence here. In fact, as far as that viewing screen from Star Wars - The Phantom Menace goes, he was possibly thinking of this one first because, here, the viewscreens are also circular in design as they are in that later film.

Actually, despite the crankiness of the effects, some of this stuff is certainly well done. It’s hard to detect the wires on some of the things, such as the little microphones that float above the big radio sets when they’re in use or the ones holding up the people when the characters are using the anti-gravity belts (this serial’s gimmick similar to the Martian wing-cloaks in Flash Gordon’s Trip To Mars). And also, talking of some of those technically advanced gadget effects, Gene Rodenberry must have been a big fan of this serial because there are two things he definitely seems to have taken on board for Star Trek. One is that pesky cloaking device which renders spaceships invisible. This is similar here to the one in Flash Gordon Conquers The Universe except is has to be hand fired from a cannon by an observer in the Hidden City and aimed at the ship. Unlike the ones in that serial, the effects of this one will only last for ten minutes so... yeah, you can just see the cliff hanger ending coming on that one, can’t you?

But another future Star Trek element... and very impressively done here... is the teleportation pads which go from point to point in the Hidden City. We’re told how they disassemble and then reassemble a person’s molecules somewhere else and they use very familiar ‘beam me up’ textures when they’re in action. This was an obvious steal by Roddenberry and they look really good. Another great effect is when two Hidden City people are using ray guns to chop through the ice formed outside the preserved dirigible that Buck and Buddy take their time trip in. A layer of superimposed ray effects are in action as the ice melts... I eventually worked out that it was a raggedy piece of cut perspex lowered through the floor with the rays put over the top but, still, very impressive stuff, especially for 1939.

The serial is full of the required fist fights (with really bad and prominent stuntmen looking nothing like the actors they are ‘doubling’ for) and aerial battles, plus the usual stealth visits behind enemy lines etc. It’s light watching for sure and, though it’s probably not quite as engaging in terms of story as the three Flash Gordon serials, I still got a real kick out watching this and it’s hopefully not be the last time I revisit this one. Like the Flash Gordon serials and others of that ilk (like King Of The Rocket Men and Daredevils Of The Red Circle), this serial was a common fixture on BBC in the school holidays during the late 1970s and through the 1980s. So Buck Rogers will always have a special place in my heart and I’ll never stop watching these things. For my last review of ‘Serial Week’ though, I’ll be watching another Larry ‘Buster’ Crabbe serial based on a comic strip and, unlike the other four, it’s one I’ve not seen before. So, you know, I’m keeping my fingers crossed it’s as much of a masterpiece as these others.