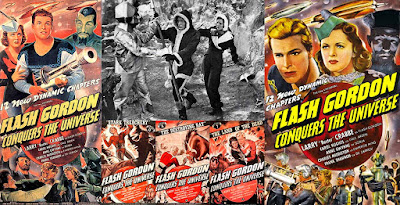 The Ming From Another World

So here we are and into what is... probably my least favourite of the Flash Gordon serials but, you know, it’s still brilliant, goes at a fairly cracking pace and is still miles better than the majority of serials which were being made at around the same time. Flash Gordon Conquers The Universe also seems to be the one serial of the three which has weathered the years relatively well with a print that seems to be in a lot better shape than the other two... so, while it’s still not in brilliant condition, the DVD is pretty clear and fairly sharp (apart from the odd tear here and there) when compared to the other two. I wish someone would save and restore these things before it’s too late... if that time is not already passed and they’re already vinegar. These serials are absolutely invaluable to show future generations the kind of thing people were spending their money on at the cinema... not to mention the fact that they are wildly entertaining.

Once again we have the three actors back reprising their roles who were the only ones to star in all three Flash Gordon serials... so Larry Buster Crabbe as Flash, Frank Shannon as Dr. Zarkov and Charles Middleton as Emperor Ming the Merciless. Joining them all for the first time are Carol Hughes as a brunette but, alas, still almost superfluous Dale Arden, Universal horror lady Anne Gwynne as the traitoress Lady Sonja, Roland Drew as a kind of new, slimmed down Prince Barin (it’s like chalk and cheese compared to the guy playing him in the first two) and Shirley Deane as a blonde Princess Aura (looking lovely but with nowhere near the moxy of her predecessor in the first serial). Plus a fair amount of newcomers including Lee Powell as the adventurous Captain Roka.

Flash’s father has been replaced in this one by actor John Hamilton, who I’m sure many of my readers would recognise from his regular role as Daily Planet editor Perry White in the 1950s TV show The Adventures Of Superman, opposite George Reeves as The Man Of Steel. Another newcomer is Don Rowan as Captain Torch... I mention him last because he’s playing a promoted version of Officer Torch from the first serial (which makes sense since the action of this one does take place on Mongo again) but, well, unless I’d looked him up I would have sworn it was the same guy who played him previously. He looks and sounds pretty much the same to me (maybe if we had a clearer print for the first one I would have rumbled that they'd replaced him).

So Flash Gordon Conquers The Universe is a very interesting serial for a number of reasons.

For starters... well look at the date this was made. A war was happening in Europe and the Americans weren’t in it yet but this one was clearly propaganda loaded. For instance, instead of the Fu Manchu like costuming on Ming The Merciless, he’s costumed more as a military dictator and there’s talk in the very first episode of him keeping concentration camps. Oh, by the way, if you’re wondering how Ming survived being disintegrated at the end of the last serial... wonder away. It’s not addressed and alluded to only briefly with an off hand comment... “So Ming is alive!” or some such. There was no way of writing themselves out of that one, must have been the general consensus, I suspect. Interestingly enough, due to the success of the last one, the writers do write a line into the script for the final episode here implying that there was a slight chance Ming might be able to escape his doom via another route... just in case a fourth serial was called for (alas, the studio policy after this was to lay off the space fiction for a bit so it never happened... at least that’s what I understand of the situation).

Another interesting thing is the two, even more blatant, shout outs to George Lucas’ future Star Wars movies (my kind way of saying how much he ripped off from these kinds of serials). The obvious one being the episode recaps. Each Flash Gordon serial has a different recap style with the first one having just text on a dark background, the second one having comic strip style pictures swiped through on a viewing screen and, in this third one (and in line with what Universal were doing in a fair few of their serials at this point, more on that in my next review), a proper single point perspective title crawl... just like the Star Wars movies. The other thing... and I remember almost jumping out of my seat the first time I saw The Phantom Menace, is the televiewers. The way the images are tuned in and also the exact same sound effects when this happened were used by Lucas in Star Wars Episode 1 so, yeah, I loved that Lucas included this all those years later. Again, these were actually used before this and... okay, tomorrow’s review for the final word on those televiewers.

And it’s not just Star Wars either. If you want to see a cloaking device which made a space ship invisible long before the Romulans and Klingons were doing it in Star Trek... well here we have a new Dr. Zarkov invention which cloaks his rocket in exactly the same way (I will also mention this again tomorrow but, in a slightly different fashion). Other technology includes those same cack-handed ray guns from the second serial but also some handsome looking death ray rifles which seem cumbersome but really look the part.

Now there are less strange inhabitants in this one, again, than in the first serial. We basically just have the Rock People and the Annihilants. The Rock People are literally just a race who dress up in Rock uniforms (to camouflage themselves in their rocky desert region of Mongo) and who speak by the sound department running their dialogue backwards. They look like nothing less than rock textured members of the Ku Klux Klan, truth be told. I don’t know how they got away with this. Interestingly, although a good majority of this serial (including the opening titles) is scored with various passages from the Liszt composition Les Preludes... some of the old needle drops from stuff like The Bride Of Frankenstein are retained and this means that the Rock People appear to exactly the same musical cue that the Clay Men in Flash Gordon’s Trip To Mars (reviewed here) used to morph out of their cavern walls by.

The other beings are Ming’s remote controlled Annihilants or The Walking Bombs. Its a shame they’re only at the end and start of two episodes because these are one of the most beautiful mechanical robot designs I’ve ever seen committed to film, with their big Christmas decoration-like heads, sped up walking rhythms and bizarrely long fingernails. They look like they stepped right out of a silent German Expressionist movie and I wouldn’t be surprised if it turns out that they did just that. They are just magnificent and I wish someone would do an action figure.

Okay, the structure of the thing is a bit of an oddity for a Flash Gordon story too, although it starts off with the usual thing of the Earth in grave danger. I found it oddly interesting that the lethal Death Dust that Ming is poisoning the Earth with produces an almost unstoppable virus called The Purple Death, which is killing people in their droves... given the time that I’m writing this review, during one of the bleakest pandemics we’ve had in a while on this planet. However, once Flash and his crew go to the frozen wastes of Frigia and mine the only known antidote which can be found there, the mineral Polarite, he actually rockets back to Earth and dumps it, curing the plague by the end of episode four. So Ming’s initial plan is quickly thwarted but, since he wants to conquer the universe, you can be sure he has more deadly weapons up his sleeve for Flash and his friends to worry about.

Most of the action in this one takes place in either the unnamed Mongo City (where Ming resides), the forest Kingdom of Arboria (where Prince Barin rules) and the arctic wastes of Frigia for a few episodes near the start of the serial. What this means is... there are plenty of props and costumes which were obviously recycled from other productions to match those last two locations. When you are in Arboria, the obvious dress code is... leftovers from the most recent Robin Hood production. Seriously, everyone there wears forest clothes and the hats with big feathers in. Similarly, when Zarkov invents a thermal spray and extremely warm clothing so that Flash and the others can survive the formerly impenetrable wastes of Frigia... he basically invents a Santa Claus suit for them to wear. It looks bad but I can only assume they did it to match with the various recycled shots from The White Hell Of Pitz Palu, which litter those scenes.

However, I’m not really complaining much because, frankly, although it’s the shortest of the three serials, it still manages to pack a punch, This might be because there are no bottle neck episodes this time around... what with the many changes in the central cast, I guess it would have been hard to find anything that was a match if they’d gone the usual route on flashbacks.

So, anyway, that’s me done again with the Flash Gordon serials for a while... I loved seeing them all again and Flash Gordon Conquers The Universe is no exception. I’ll leave it for you to find out why it has such an aggressive non-sequiter of a title but, it’s a bit of a stretch. I just love these things. However, in between the previous serial and this one, in 1939, Buster Crabbe would once again play a famous science fiction novel and comic strip character in another great serial which has a lot in common with these three... and that one will be the subject of my next review. Coming tomorrow, to this blog!