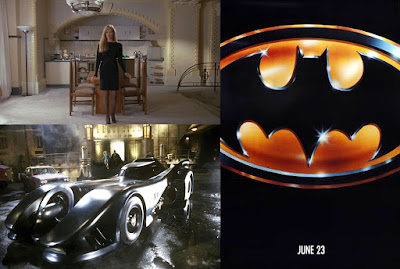 1989 came to be known as The Year Of The Bat for many, due to the release of Tim Burton’s Batman on the 50th Anniversary of the popular comic book character. I remember the mood of the time well. I also remember the queues to get in.

This was pretty much the last time I recall queuing for a movie that was quite literally a ‘blockbuster’. It’s something that, despite the popularity of films these days, you don’t really see anymore. I remember my first experience of the power of the blockbuster, trying to get through a packed Oxford Street in London to see Star Wars at the Dominion Cinema at the tail end of 1977 (literally a day or so away from New Year celebrations... it's a theatre now). Everywhere while the film played for months, monster queues would pop up outside cinemas going on for blocks. Even the word ‘blockbuster’ was first coined for this ‘film queueing’ phenomenon, with the release of Easy Rider in 1969, if memory serves. I remember seeing Batman a few times at cinemas but, the one time which really sticks in my memory is of lining up outside Barnet cinema for a midnight screening with my friend Kerry, in a queue which literally snaked back on itself about 12 times in front of the cinema before ending several blocks away. There was a fair amount of uncertainty as to whether the cinema would have enough seats on any given night to accommodate the amount of people trying to get into a performance.

So it would be fair to say that the film was a huge success (although, I think it technically was financially in the red for decades, in part owing to the deal struck with Jack Nicholson on this film... who was also, due to his shrewd contract, being paid for the sequels even though he’s not in them... at least, I seem to remember reading that).

It was well loved by audiences and critics too, although I remember George Peppard appearing on Breakfast TV at the time and, when asked, saying that the film was terrible. Most people liked it though and that included me. I wasn’t intending to watch this one again for a while but I keep meaning to watch the sequel for a Christmas review (it being a Christmas movie) so, I didn’t want to go into that one again without this one still fresh in my mind.

Okay, so, I absolutely loved it back in 1989 but, in some ways, the film doesn’t really hold up that well today. I don’t know what it is about Burton’s vision (a director I find really hit and miss, although always uniquely creative) but, while it does kind of scrape through as a coherent whole, the film does seem to be just a series of nice looking set pieces with maybe no real downtime to give them strength in contrast. It feels like almost every scene is screaming in your face for attention and you almost can’t quite hear everything in the crowd. To be fair, though, I think that’s probably also a criticism of the whole of Hollywood cinema from the mid 1980s to mid 1990s so, in itself it’s probably unfair to bury it just for that. It’s like this is the first wave of movies to be somewhat ‘detrimentally’ swayed by the aftermath of the huge impact of Star Wars on popular culture because, sometimes the things which make a phenomenon successful are not best understood by the art that it unintentionally spawns.

That being said, I didn’t dislike the movie this time around and can understand why Batman still holds a certain place of high esteem in the hearts of certain cinephiles.

One of the reasons that this was a phenomenon, I believe, is because super hero movies were few and far between at the time and, successful ones were hard to find. The Christopher Reeve starring Superman The Movie had been a big hit but that was over a decade prior to this. Batman had been portrayed in cinemas by different actors three times before this one but, the last time had been in 1966. So, audiences of various ages were ready for a new take. They didn’t want a comical version like the last one had been though, so the casting of Michael Keaton as Bruce Wayne/Batman, someone who was known more for comic roles, met with a huge letter writing campaign objecting to his involvement... boy, I wonder what would have happened if this movie was being made in the internet era. I never had a problem with the idea myself (I’d quite liked him in his previous collaboration with the director, Beetlejuice) and, when I eventually saw him in the role, I think I was justified in holding my tongue.

Keaton is an absolutely brilliant pick for this film as so many of the actors and actresses here are. What a cast! Kim Basinger is brilliant but there are also some great character artists here, among them Michael Gough (as Alfred), Pat Hingle (as Commissioner Gordon), Jack Palance, William Hootkins and even Lando Calrissian himself, Billy Dee Williams, in the role of District Attorney Harvey Dent. I remember getting excited in the cinema when I saw this and was waiting for him to transform into super villain Two-Face before the end of the picture although, well, it didn’t happen. “Huh?” I thought when the credits rolled, “They must be saving that for the sequel.” Alas, although Billy Dee Williams was contracted to continue playing the role, his contract was bought out by Warners and when Harvey Dent finally becomes Two Face for the third movie in the series, Tommy Lee Jones took over the job.

Looking at the film now, there are some nice things about it. It looks lovely in that dark, gothic way that Burton soon became known for although, I think some of the editing on this one is a bit jarring. Sometimes deliberately so, when we are startled by a close up of a TV screen being smashed by a boxing glove and sometimes, less so, when Burton will attempt to hide the visual edit by carrying on the sound of one scene into another (on a specific sound cue like The Joker’s laughter). Incidentally, the destruction of TV sets by The Joker as opposed to, I dunno, just changing the channel or switching them off like a normal person, seems to be some kind of running character trademark here.

Other things of note would be the turning over of a Joker card from a deck at a key point in the narrative, foreshadowing his character’s fate... and the strangely deliberate lack of period in the film, where technology from all eras comes crashing together to give the setting a timeless appearance (much like the old 1930s and 40s Universal Horror movies which, I’m sure, Burton was probably influenced by as a kid). I especially like the way that both Keaton and Nicholson compliment Kim Basinger on her apartment with the observation that it has "lots of space"... something which obviously re-enforces the connection between their two characters as being different impressions of the same coin, in the way in which they both tend to express their psychological abberations.

There are also a lot of references to other moments of both comic history and pop culture scattered throughout the movie... such as the police file photos of Jack Nicholson’s character, which look to me like they’ve been taken from One Flew Over A Cuckoo’s Nest, or the references to Vicky Vale’s photographic work in Corto Maltese (after the famous comic book character of the same name, no doubt).

There are also some nice musical references such as the use of Beautiful Dreamer woven into the score which, to be fair, always reminds me of Mighty Joe Young but it’s used nicely here for an expression of The Joker’s more artistic side. Danny Elfman’s score is, of course, phenomenal and, although he’d already done a great score with Beetlejuice, this one really put him on the map. It is kinda clouded by comments that a lot of it may have been... let’s say ‘more than assisted with’ by Shirley Walker, who only receives a conductor’s credit in the final film. Certainly her scores for the Batman animated series sound very Elfmanesque although, to be fair, that was probably part of the brief. Now that she’s dead I suspect the truth will never come out but, I like both composers so I don’t really care. It sounds like this was, maybe, a great collaborative venture, asides from the usual orchestration work by Steve Bartek but, you know, I’m just guessing from differing viewpoints I’ve read and information which sometimes seems to come to light. Great score though, either way.

And that’s all I’ve got to say about Batman. If you watch it now, it’s almost more a film about what cinema was doing at the time rather than something which holds together as all that much more. It’s somewhat flawed, I feel but, strangely watchable and certainly entertaining in parts. I’ve no desire to see it again for a while but chances are I will circle back to it again at some point in my life. At the time it was a benchmark movie and deserves a certain amount of respect for that, I think. Not to mention, it also really put cinematic artist Tim Burton on the map too, I believe. Worth a look, if only for the nostalgia rush.