Phantom Of The Opera 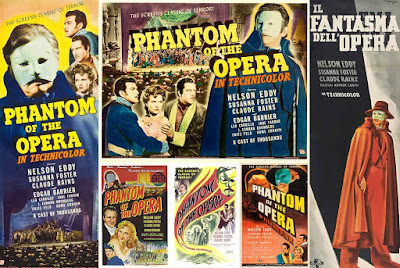 As far as The Phantom Of The Opera in the movies goes, there’s the amazing 1925 silent version with Lon Chaney playing the titular character of Erik... and then there’s everything else. And everything else loses hands down to the Chaney version, this one included. Of the four movie versions I’ve personally seen, only the 1925 version comes close to capturing the proper tone of Gaston Leroux’s novel, originally serialised in a magazine. The pulpy, adventure elements coupled with the creeping terror of the main antagonist are best captured in that one and of those I’ve seen... which include that one, this 1943 version, the 1962 Hammer films version and, of course, the one which I will always think of, broken heartedly, as Dario Argento’s worst movie (not to be mistaken for his fantastic movie called Opera), the original will always be best.

I really don’t count The Phantom Of The Opera as a horror story... it’s more a thriller, to be fair but, I’m including it in my rewatch of the Universal Classic Monsters films because it’s always included in their basic DVD and Blu Ray starter sets and, well, I just thought I’d give it another go.

Now, Universal had been trying to remake a new version of The Phantom Of The Opera for quite a few years since their original version but this one, re-titled Phantom Of The Opera, finally came together for them in ‘43. You can tell they considered it a prestige picture because, unlike any of their other ‘classic monster’ films, this one was shot in Technicolor (please excuse the American spelling but, it’s a brand name, what can you do) as opposed to the monochromatic mayhem with which their horror pictures were usually presented in. Not sure this was the best choice but, hey ho, that’s what they did.

What they also did was spend well over half the budget of the picture resurrecting some of the old sets from the 1925 movie and soundproofing them for use in talkies. So, you know, this was something of an important project to them.

The film stars Claude Rains as Erique Claudin and, he certainly attracts the sympathy of the audience from the outset but... I’m not sure that’s really what the character is supposed to do, to be honest. The understudy opera singer whom he promotes with his murderous threats to others is played by Susanna Foster and, bizarrely, she has two love interest characters in this who are constantly competing to be in her favour, making up some of the film’s comic relief. And, yes, you have to wonder why The Phantom Of The Opera needs any comic relief but... well, they obviously thought it did.

One male lead is the main male star of the opera and, to play him, the producers chose Nelson Eddy. Yeah, that Nelson Eddy, of Jeanette MacDonald fame. The other main lead, played by Edgar Barrier, is a policeman so, yeah, the writers can get these two guys wandering the catacombs of the Opera House in an attempt to find their sweetheart when the time comes... in a far from exciting or even lengthy sequence.

Right from the outset of the film, when the titles proudly but incorrectly proclaim the film is Based on the composition Phantom Of The Opera by Gaston Leroux, leaving off the word The from the novel’s title, they start to get things wrong. Then, a rather long lead in and heavy handed ‘origin’ story for The Phantom is created and explored and, really, it’s just a little tedious. The opening of the picture starts off with a lot of fluid camera movement which is surprisingly dynamic for the period but, honestly, there are so many opera sequences which do nothing to move the story on that it just gets very boring right from the outset. I think the first five minutes has no dialogue at all other than the singing of the opera singers... it doesn’t really work, even with the very impressive camerawork thrown in.

The actors are all great and some of the dialogue is okay but, with the amount of ‘lurking’ without doing much other than as a silhouette in the background of scenes that Claude Rains does here, it never really gets even remotely creepy or chilly in terms of atmosphere and, much as I love seeing these actors working together - they have some good chemistry - it all just seems very dull and plodding and, although it’s not the worst version of The Phantom Of The Opera I’ve seen (sorry Dario), it’s really not something I could sit through as many times as the other Universal monster movies of the period.

Jack Pearce’s make-up for The Phantom’s disfigured face is pretty much just burns down the side of his face (despite having a whole tray of etching acid thrown all over him) and, while that was probably quite gruesome for a 1943 movie, this is nothing like the peeled back skull of a face that was a characteristic of the character in the original novel, made famous by Lon Chaney, The Man Of A Thousand Faces, when he made his version (his, by now famous, son was considered for this role for a while but, obviously, that didn’t happen).

And I don’t have much more to say on this one, in actual fact. If you’ve never seen a version of The Phantom Of The Opera then probably don’t start with this version (although the colours and costumes are good)... definitely bypass this and go straight for the silent one if you want a more interesting, dynamic take on the story which is a whole lot more in keeping with the source material than a good many of the adaptations of this work over the decades... including this one.