Tales Of The Shadowmen 16 - Voire Dire 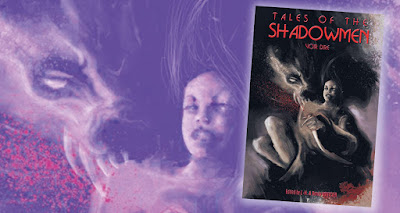 If I Were A Richleau

For this very short look at the sixteenth volume in the Tales Of The Shadowmen collections, Voire Dire, I am once again about 16 months late in reviewing it. This is because of the December publication dates which leave me a year behind on these (I like to read them over the Christmas season). And, like all of them, this latest selection of short tales of famous fictional characters teaming up or crossing paths with one another is a bit of a hit and miss affair. For me, this year, it’s rather more of a miss but, well... we all have our favourites.

Of the fourteen stories that make up this year’s anthology, I will single out a few of which I was somewhat entertained by. The Peculiar Cats Of The Sea Of Dreams by Mathew Baugh is something which I would have found dull had it not been for my re-reading of the complete fiction of H. P. Lovecraft last year (reviewed here). I was quite up for it now, though, as a variety of characters are assisted by Randolph Carter in the dream kingdom in which he is known to be found... along with yet another incident with those powerful, battling cats which often come to the aid of their friend.

It’s often the case that I am most entertained by the stories about characters I know nothing of and I don’t know who the main protagonists from at least three sources in Nathan Cabaniss’ story Rage Of Terror are... so perhaps that’s why I enjoyed that one so much. I was, of course, familiar with the main antagonist of that story, as Fantômas makes his first (but by no means his last) appearance in this volume. It was also nice to spot a very young Kojak as a background character rookie cop (given his first lollipop in one of his two throw away appearances here) and also how the tale turned into an alternative origin story for Batman.

There’s a nice Rouletabbille tale by Martin Gately, which serves as a sequel/finale to some others which have appeared sporadically in the Tales Of The Shadowmen series and also a nice futuristic sequel story to one in another volume by Nigel Malcolm where, in a world modelled after Ridley Scott’s movie Blade Runner, The Nyctalope and Sexton Blake hack wall street and offer an exit from under their foes for the Frankenstein monster and its wife, the replicant Rachel from the aforementioned film. There’s even a nice moment in this tale where we find out the sad, future fate of the source of Doc Savage’s gold.

Captain Nemo appears in two tales... one by Travis Hiltz opposite characters such as Captain Haddock (from the TinTin graphic albums) and the Dread Pirate Roberts (from The Princess Bride?) and another, much more interesting one which kind of breaks the rules of appearing in a volume of these specific collections in that it only features one set of characters. I’m guessing that they needed a story to make up the space for this volume because its also a tale which has been published before in a different collection. This one, by Jean-Pierre Laigle purports to be (and of course it’s not) a formerly unpublished chapter from Jules Verne’s 20,000 Leagues Under The Sea and it involves the good captain telling one of his new guests of the time that the Nautilus was teleported by accident out of the ruins of Atlantis and into deep space... and how the Captain managed to get himself, his crew and his vessel back to the safety of the waters of Earth.

There’s an interesting story by Joseph Gibson where The Falcon from the 1940s, set in the 1960s and fully aware of his ‘fictional’ on screen exploits, teams up with his brother, among others, to take on Fantômas but, I was somewhat confused by the whole affair because, though it was somewhat entertaining, it’s also a fact that The Falcon’s older brother met his death in one of the earliest movies and his brother took over. What the George Sanders version is doing still alive to seek the assistance of the Tom Conway version (who was also Sanders brother in real life) is anybody’s guess.

One of these is the very short story The Replacement by Xavier Mauméjean. In it, Bruce Wayne goes to a meeting with Doc Savage and The Shadow to seek their blessing at the start of his crime fighting career. On the way out from his meeting in the Empire State Building, he bumps into Britt Reid (The Green Hornet) and Kato, who then go up to the 86th Floor for, presumably, a similar meeting and, I have to say, I really didn’t understand the implications of some of the comments made at this meeting.

The last one I’ll specifically mention is The Stone of Solomon by David L. Vineyard. This is an exciting tale of John Silence teaming up with Dennis Wheatley’s Duc de Richleau character but, alas, the regular introduction to the story tips its hat that the version of Richleau present for the majority of the story is not who he seems. Since the reveal at the end of the short is very protracted and teased out, one wonders why the writer should have bothered when we know which character the story is supposed to be about in the tale and that, since he’s not mentoned once in the narrative until the end of the story, it’s obviously him masquerading as Richleau in this one.

And that’s about it for Tales Of The Shadowmen 16 - Voire Dire. More characters abound and cross paths... some of whom I know very little such as Darkman and Gordon Gekko (I’ve not seen their respective movies) and others I am more familiar with such as Arsene Lupin or Anne Rice’s vampire character Lestat. There’s also a very entertaining and thorough version of Edgar Rice Burrough’s Jane Greystoke (formerly Jane Porter before she married Tarzan) and even a couple of relatives of famous characters, such as the sons of Professor Challenger and Robur The Conquerer.

Actually, I guess I was about 50/50 with this volume which, I guess is not a bad batting average considering the number of writers and the considerable number of character appearances and references which are scattered among the tales. Once again, I’ll look forward to receiving what would have been the December 2020 edition this coming Christmas release and hopefully, fingers crossed, get around to sharing my thoughts with you on that one in about a year from now.