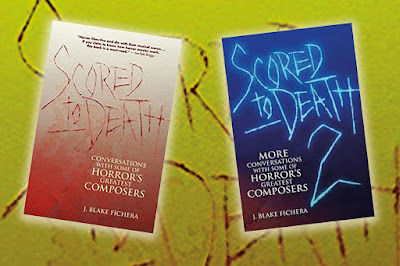 Just a quick shout out of two books my friend Dr. Rob gifted me for both Christmas and my birthday recently. Anyone who has been reading any of my reviews with any regularity over the years has probably picked up on the fact by now that I love movie scores. I listen to them all the time and, funnily enough, the guy who gave me these two tomes is the only person I know in real life, who has the same kind of passion and dedication to them as I do although, curiously, he doesn’t listen to a lot of horror scores, it has to be said. Which is the subject of these two tremendous tomes by J. Blake Fichera...

Basically, what Fichera’s done here (and also apparently on some podcasts of the same title, which I really need to catch up with some day when time is not my enemy) is to take some key film score composers who are still with us (or were when he started out on each of these two projects) and interview them with a special emphasis, for the most part, on their contributions to the horror genre.

The first volume collects interviews with Nathan Barr, Charles Bernstein, Joseph Bishara, Simon Boswell, John Carpenter, Jay Chattaway, Fabio Frizzi, Jeff Grace, Mairizio Guarini, Tom Hajdu (of Tomandandy), Alan Howarth, Harry Manfredini, Claudio Simonetti and Christopher Young. The second volume comprises interviews with Michael Abels, Richard Band, Holly Amber Church, Charles Clouser, Robert Cobert, Disasterpeace, Koji Endo, Brad Fiedel, John Harrison, Kenji Kawai, Joseph LoDuca, John Massari, Bear McCreary, Rob, Donald Rubenstein and Craig Safan. Of those two lists, I have at least one score from the majority of them listed (some of them, many shiny discs... I’ve even been to concerts by some of the guys) so there’s a lot of familiarity with their work and styles for the most part but, even when the interview was with a composer I hadn’t experienced myself, I found the answers they gave to Fichera’s questions very interesting and I especially liked the back story provided by many of the composers about how they came to find their calling of writing music and how the film scoring side started for them.

Even certain questions which were duplicated, more or less, through various chapters, were interesting because you get to get a feel for how each different composer (of very different ages in some cases) correlate with their answers or, indeed, contradict each other as their processes differ. Some of them, for example, find the script a helpful start but many of them would rather not read the script and compose from what the director actually managed to get worked up into the rough cut. Although many composers, as I expected, hated the more common practice these days of providing a temp track with the cut (where a film would be cut to found music from other sources which, because of using these tracks to support the rough cut, brings the danger of the director loving the temp score... perhaps the most famous example of this would be Stanley Kubrick rejecting Alex North’s score for 2001 - A Space Odyssey and licencing the music on the temp instead), there are actually a couple of people in these books who welcome the inclusion of the temp track as an aid to a communication of the emotional feel of the pieces they need to compose. Of course, the worst thing I hear sometimes when I listen to a score is actually hearing the temp track kinda bleeding through into the composer's own music, because you can recognise the structure of the cue and realise straight away what track from another film was probably there in its place when the rough cut was assembled. You can often tell when a composer has been asked to imitate something fairly well known.

And of course, the composers won’t always jell with various readers. A couple of composers came across as a little naive to me, for example and another one or two came over, it seemed to me at least, at just the wrong side of pretentious. I suspect that all comes down to the baggage and life experiences a reader brings with them as much as anything actually on the printed pages here though and it really is to be expected. Sometimes they get it a little wrong too. Without naming names, for example, one composer quoted a very famous film composer saying that they weren’t, because of their period, as experimental as he and always did things with a big orchestra when in fact, the composer he was referencing was as much known for his smaller, unusual groupings of instruments and spirit of experimentation as the composer pointing the finger here (probably more so).

It’s not a surprise that my favourite composer, Bernard Herrmann, comes up a lot on almost everyone’s favourites or most influential, although I wish people wouldn’t keep thinking that movies like Psycho are horror films (nor William’s Jaws, nor Shore’s Silence Of The Lambs for that matter)... it’s like one day, everybody in movie appreciation land just woke up and forgot the genre of thriller ever existed.

Overall though, these two tomes are both entertaining and illuminating and it’s great hearing about experimental instruments, the odd score I’ve not heard and the odd film I’ve not seen (I watched the phenomenal Under The Silver Lake, reviewed here and grabbed Disasterpeace’s score for said film on CD as soon as I found out about them from this book... um... yeah, actually this book is another one of those which is turning out to have an expensive afterlife affair with my wallet). It’s good that the almighty Ligeti was referenced as one of those composers who, inadvertently because it certainly wasn’t his intent, invented and influenced the vocabulary of horror film scoring and is still regarded highly by many composers today (who also list Penderecki, obviously, as an influence on the genre). I was also delighted and bemused to find that composer Kenji Kawai, who wrote the scores for the original Ringu and some of its sequels and spin offs, lists Burt Bacharach as one of his primary influences.

Probably the worst part of the second volume, for me, was when one of my absolute favourite contemporary score composers, I won’t name him here, talked about a certain common practice as to how modern film and TV composers write scores these days and his approach seemed to me to be very disheartening and disappointing. In fact, I could almost picture Herrmann and Morricone spinning in their graves about what he said here. That was a real eye opener.

All in all, though, if you are someone who has an active interest in either horror films, film scores or that wonderful place where both those things come together to make art, then Scored To Death Volumes 1 and 2 by J. Blake Fichera are definitely worth your time and money. And, of course, if you have the scores, then you can play one or two of them after reading each chapter, which is a nice thing to do of an evening, for sure. Definitely pick these two up.