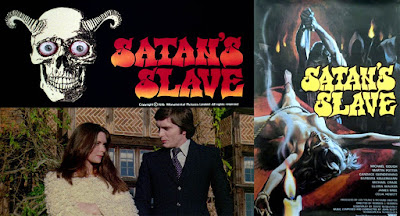 You know, I’d only seen one Norman J. Warren film before this first time watch.* However, since that other film, Inseminoid, holds a special place in my heart due to circumstances surrounding its release (I’ll get to that when I review it for this blog), I thought pursuing the recent Indicator Blu Ray boxed edition of five of this director’s films (including Inseminoid), was a good idea. Indeed, it turns out that in the case of this film, Satan’s Slave, it’s good that this is my first experience of it because it seems that the previous UK releases of it were cut down to something approximating the original ‘X’ certificate theatrical release. Somehow (and good on them), Indicator have been allowed to include a full on ‘director’s cut’ with the sex, nudity and violence enhanced even more than what the film-makers were allowed to get away with back in the day.

The film starts off strongly with a nice, strong graphic line drawing of a face which goes through a few transformations before it’s a skull with bulging eyeballs... then a cross and then various cards from a Tarot deck before returning to the bloodshot eyeball skull thingy (as is the technical term for this), all accompanied by composer John Scott’s wonderful score. Then we have a preliminary opening where a naked girl, played by one of the producers as the actress didn’t show up on set, is sacrificed in some kind of satanic ritual (including a nice ‘bloody eye’ effect reminiscent of some of those Hammer films where Christopher Lee played Dracula). Since Satan doesn’t actually appear in the film and I don’t remember the devil getting much of a shout out, I’m assuming the robes, blood and general nakedness are the only real reference to which the film’s title can allude. The main masked/robed priest doing the deed is, you can totally hear from his voice, played by Michael Gough so, when he comes into the main body of the story a little later, it’s no real surprise that he is just as much a threat as the character of his son Martin, payed by Stephen Yorke. And we also get a scene where Martin murders one of his lovers (he seems to have a few on the go at the same time) in a protracted sequence where he non-consensually smothers her to unconsciousness, ties and undresses her on his bed, then threatens the young lady with scissors before letting her go... only to change his mind by splitting her head in between a door and its frame before stabbing her.

The plot involves main protagonist Catherine, played by Candace Glendenning, who is accompanying her parents to visit her previously anonymous uncle, a day or two before her birthday. The car crashes (well it’s just a little bump, really) a few yards from their destination, a big country house. After Catherine gets out of the car to get help from her uncle for her parents in the front of the vehicle, the car inexplicably explodes. The uncle, his son Martin and Martin’s lover, Frances, played by Barbara Kellerman , take her in to recuperate for a few days. However, Catherine is prone to premonitions and visions, which makes sense since it turns out she is a direct descendent of some kind of witch from hundreds of years before. Michael Gough’s character has already sacrificed his wife to have said witch reborn and, although she doesn’t know it yet, Catherine is earmarked to be the next 'stab' at resurrection fodder unless she can escape.

It’s also nice to see former Doctor Who companion to William Hartnell and Patrick Troughton, Michael Craze, as Catherine’s boyfriend. Alas, he only has two scenes because his second appearance has him taken over psychically by the long distance but, apparently mesmerising, mind powers of Michael Gough’s character, compelling him to throw himself from the roof of a block of flats with a rather grisly aftermath.

Now, I’m used to seeing British horror films by the likes of Hammer, Amicus and Tigon studios but this really is a proper piece of trashy exploitation with a UK flavour to it and it’s a very strong and entertaining work, to be honest. In fact, I’d say it’s a lot better than much of the US stuff I’ve seen in a similar vein, to tell the truth. It’s got lashings of nudity, sex and gore as part of its genetic make up and Warren seems to have no trouble capitalising on all these factors to make the film really work. Indeed, I was somewhat taken aback when the heroine of the film stabs an antagonist directly in the eyeball and we see it go in and then we get a few aftermath shots of the nail file she used still lodged in the guy’s eyeball. Something which the majority of directors mostly cut away from and it’s rare to see something this strong since Dali and Bunuel dissected a lady’s eyeball at the opening of their silent masterpiece Un Chien Andalou in 1929.

In a similar vein, although not as impactful and probably not the first time this was done, the moment when a door swings back to reveal a young lady hanging from the door and held there by the big carving knife which has gone through the front of her mouth and out the back of her head before being embedded into the wooden panel, must have been a few years early, at the time, before this kind of reveal became a more common factor in various American slasher films of the late 1970s and early 1980s (not a genre I get on with particularly... I prefer a well shot Italian giallo to those kinds of movies).

What also really works about the film, though, is the way some of the shots are designed. The colours are quite a bit more muted or greyer than you might see in a Hammer film of around the same time but the director more than makes up for it by getting creative with some of his framing, especially since his modus operandi seems to be to just start off with a static screen in which a character is seen and then moving the camera with that character in whichever direction they are going. So, sure, standard stuff in that respect but he manages to do some nice things visually which lift the sequences and it’s exactly the kind of stuff I like...

For example, one scene shows Catherine sitting alone in a room on a chair. She gets up and starts walking to the left of shot with the camera moving on her to keep her in the centre of the frame until she comes to a stop in front of a mirror. A she moves in front of the mirror, Stephen walks into the reflection of the mirror and comes to a stop opposite her (his real self out of frame entirely, of course) to start a conversation up. Another sequence has Frances wearing a nice purple and blue hotch potch of a garment but she’s standing in front of a painting of a lady wearing the exact same kind of purple tones. It’s all nice stuff and it’s this kind of thing which really contributes to the overall entertainment value of the film... for me at least.

One slight cliché is when composer Scott uses a kind of rip off of Bernard Herrmann’s classic ‘stab music’ from Psycho, when ever somebody crosses paths with a knife or, indeed, nail file or similarly pointy object. It’s a bit of a steal in terms of the way it borrows from Herrmann’s masterpiece but heck, even the great Jerry Goldsmith did a similar thing once (in Coma) so I can certainly cut this composer some slack here.

Satan’s Slave is packaged as part of the Indicator box set Bloody Terror: The Shocking Cinema of Norman J Warren 1976-1987 and, as you would expect from such a great boutique label, they’ve not only given us a proper, uncut version of the film for the first time ever in the UK but also put some great extras with it, which include a couple of commentary tracks (one with the composer), outtakes and deleted scenes, a making of featurette, a chat with the composer (who actually plays a part of the main theme on a piano for us) and an interesting comparison featurette on the censorship issues of the film. I was really impressed with this set and, I have to say, I’m looking forward to seeing the rest of the movies in this collection sometime soon.

*Since reviewing the movies in this boxed edition, I also saw his earlier film
Her Private Hell, which explains why that review beat these to the site.