A Conspiracy Of Bones 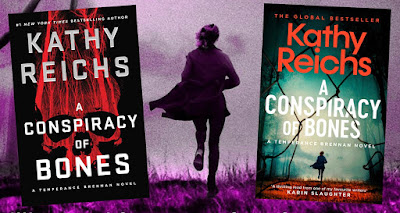 Through A Web Darkly

Warning: My significant other asked me to put a
spoiler warning on here because, apparently,
there is a spoiler. So please consider yourself warned.

A Conspiracy Of Bones is the latest of Kathy Reichs’ novels about bone detective (as I like to call here) Temperance Brennan. This is the original version of the character that Reichs has now on TV in a show called Bones but, there are as many differences as their are similarities to the two characters and, while I’ve never indulged in the TV show (maybe one day... so many things to see and do), I always like to think of these original core books, which have an entirely different set of supporting characters and which are set, spiritually at any rate, a substantial time after the stories depicted in the TV show, as being the real deal when it comes to Temperance Brennan. Although, an interesting little nugget of information I did glean recently is that the version of Tempe in the show now writes thrillers about a character called Kathy Reichs. Oh yeah... totally not going to go there... especially since Reichs models the character on herself and her own profession (her non-writing profession).

If you read my blogs regularly you’ll know that, up until a few years ago, I would settle down to the new Patricia Cornwell book on Christmas day and then follow it up straight after with a chaser of the latest Kathy Reichs novel. Well, something disturbed my routine in that both authors took a year or two off for various reasons. In the case of Reichs, she had been diagnosed with an unruptured cerebral aneurysm which has slowed her down somewhat, to a degree, by all accounts. And so, now she’s finally written Tempe’s latest exploits here (the book was published midway through last year), Temperance Brennan also has exactly the same ailment... and is also trying to take things slow.

Not so slow that she doesn’t get involved in yet another nasty case, this one involving a suicide, the adversity of a grand standing new boss who won’t let her near her workplace or work any cases and, ultimately, the discovery of murder and intrigue involving child pornography websites. And, as usual with this writer, it’s another, 'unputdownable', top notch thriller which pulls you in for a ride and won’t let go until you’ve turned your last page.

There’s not much of her lover Ryan in this one, as the retired policeman is away working another case in France to establish his new Private Investigation company, although he does pop in for a while when things get really rough around two thirds of the way in. Not as a cavalry figure this time but, more as moral support. Once again, Tempe is aided in her unauthorised investigations by 'Skinny' Slidell, who is also retired but volunteers at the homicide department still (or some such).

And it’s the usual, excellent pot pourri of clues and ideas, some of which are skillfully held back due to dramatic inventions until the right moment in the story, involving all kinds of interesting things like MK Ultra, The Men Who Stare At Goats and the real life Stargate project. It was also a voyage of discovery for me as I read, not only chilling things about the Dark Web and places like Truthfinder.com but, also, learning for the first time that Tempe’s favourite movie is Woody Allen’s wonderful Annie Hall.

And there’s all the usual dramatic story points including a possible stalking of Brennan, a fire, a possible drugging or unusual flare up symptom of Tempe’s own unruptured cerebral aneurysm... where she goes missing in action (and in her own memory) for ten hours... and an arson attack on her home which manages to destroy almost every bit of evidence she’s spent a good deal of the book acquiring. Reichs also continues, in many chapters but not all, that kind of cliffhanger foreboding statement which means you just simply have to get right on to the next chapter and never mind what else you wanted to do that day. These included little nuggets of chapter endings such as “I turned to the photos on my phone. Had been scrolling a while when I spotted an image that froze my breath.”  or “I read them. And felt a chill wash over my body.” and “Life was about to go from bad to pure hell.”

One thing which was a little different was that, although the writing style is still enthusiastic and upbeat, Tempe seems to be in a very bad place emotionally in this one. Things are getting on top of her in the worst way and it’s a little unusual to hear her acknowledge that her life is more of a complete mess than usual. So that’s interesting and I am really looking forward to where the character ends up next in her life... hopefully in a novel coming soon.

One other thing which I found interesting is that coronavirus isn’t mentioned once in the novel... and this has got me to thinking when the novel is actually set. I’ve always assumed that they’re set the year they are released but a chapter title date stamping the day as Friday 13th July at one point pulled me up short. I checked and, apparently, the last occurrence of a Friday 13th July was in 2018 so, yeah, maybe... at least that would explain the lack of Covid 19 references.

All in all, fans of Reichs and her long running Temperance Brennan series of novels have got nothing to worry about with A Conspiracy Of Bones. It’s business as usual for Reichs, which means a compelling thriller which you won’t want to put down until you’ve finished racing towards the finishing line. As always, a hearty recommendation from me and I look forward to hopefully reading another in the series before long. I cant wait to see what Tempe gets up to in the future.