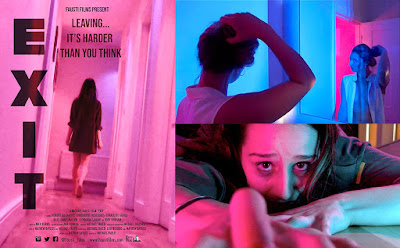 British writer/director/producer Michael Fausti’s feature length slice of angel cake Exit has become something of a cause célèbre on social media over the past year. Garnering a few awards it’s the very epitome of both micro-budget movie making and also just how good you can get it to look while still bound by the many pitfalls that the resources available to that level of movie making will always command and inspire people to escape. For many, this will possibly be seen as something of a simplistic human drama played out in a hotel room over the course of one evening and, okay, it is.

On the other hand... and without wanting to give away the obvious here... the film itself is also a literal metaphor standing in for something else and, although I had figured out the course trajectory of the ramifications of the exit of the title a minute or two into it, it certainly clearly marks its own intent very early on when the list of rooms on the doorbell buttons on the entrance to the hotel, in which the entire film is set (with the exception of a few brief shots here and there) includes the names, Abbadon and Gehenna. And if you don’t take anything away from those terms and you want to watch Exit then, okay, do yourself a favour and don’t look them up until after the film. In the words of a famous Gallifreyan tainted human... “spoilers sweetie”.

The film deals with two couples who are accidentally double booked into a hotel room for the same night. The owner of the place who is showing them around, played with relish by Tony Denham, offers the room to both couples free for the evening as long as they share... and he will sort out the error with further accommodation provided in the morning.

Now I’m not going to summarise the plot here other than to say... it deals with what happens when a half uptight English couple, Stephen (Billy James Machin) and Michelle (Leonarda Sahani) are left alone with a drug imbibing, wine guzzling French couple, Christophe (Christophe Delesques) and Adrienne (Charlotte Gould) who allow their passions to surface and clash against the sensibilities of their nocturnal cohabitors. There is sex and then the inevitable violence as the encounters bring the expected consequences and, if you are buying into the metaphor fully at this point, it becomes a horror film or metaphysical movie about the way the mechanics of the hotel and the outside environment work in ‘stark balance’.

The film does a few interesting things, the first of which I will say started to irritate me at first and which is in the form of constant and extended flashes forward and backwards, in slow motion with a heavy reliance on composer Nick Burns diabolically maniacal and hellish scoring of various cross cut sequences (with perhaps not quite the gravitas of a Nicholas Roeg exploiting a similar array of invading imagery). However, once I realised where the analogy was going, from very early in the picture, I realised it made sense to cut the picture this way so... yeah, stick with it, the style will probably grow on you.

Another thing the director does is to do what the old Universal horror movies did and to use objects from slightly different periods in a kind of post-modern melange... which again makes sense with the overall ‘world view’ of the drama. So for instance, old dial telephones which are even older than myself, an early typewriter, the presence of four channels on television (augmented with the latest channel called Sky), the joke about Ikea. It might seem like deliberate taunting at first, on the part of the director but, like I said, stick to the end and it makes sense that this kind of controlled anachronism is put out front and centre.

The director is also one of those who likes to wear his influences on his sleeve... or at least it seems so to me. The coloured lighting within the hotel using pinks, blues and greens etc (including a shot where the four guests are lit in pink but the owner somehow escapes the lighting effect) speak to the big giants of Italian genre cinema, Mario Bava and Dario Argento and I’d be very surprised if this director and the cinematographer weren’t fans of their movies. However, just like the mixture of period styles, the ending shots of one of the characters in the street after making a personal, titular exit from the scenario also provides a motive for employing this kind of lighting scheme to the movie too (which is just as well, actually, because something tells me they would have probably gone down this route with or without that contextual component). There’s also a fairly pointed reference to Hammer’s Dracula Has Risen From The Grave in one shot towards the end which I’m sure many fans of the classic British studio will appreciate.*

Another thing in favour of the film is that the performances are pretty nicely done from most of the cast and, while a fair amount of the film relies on image and sound without words, the writer demonstrates a good ear for dialogue. It certainly feels typically British... while throwing about references to Donald Trump juxtaposed with the death of Napoleon... which again makes perfect sense by the end of the movie. The film certainly has a personality all its own and, in this day and age, that kind of quality is important.

And there’s not much more to say about this one. Exit is a nice attempt at something slightly different with some definite nods to genre films in general and purchasing a copy is a good step into helping out the smaller, independent film makers working without the backing of large movie corporations. And if you want to show your support and get a copy of the film, signed by the director and with various bonuses like a mini poster and stills, then you can head directly to his website here at Fausti Releasing... https://faustireleasing.bigcartel.com/product/exit-special-collector-s-edition-blu-ray and treat yourself to a copy. However, if you’re going to do it, do it quick because it’s a limited edition and its selling out fast.

*Although possibly not the idiot on the IMDB who says that the shot of Gogo Yubari’s death in Kill Bill Volume 1 was an homage to Lucio Fulci’s City Of The Living Dead. Um... yeah mate... I think Hammer got there first, somehow. I’m really losing a lot of respect for the IMDB... as you’ll see in a lot of my upcoming reviews. I think the acronym for IMDB should forever read ‘Idiots Make Disastrous Blunders’, to be honest.