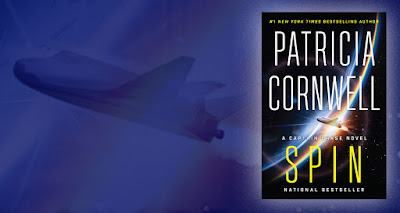 Warning: There will be some major character spoilers in here... so you have been warned.

Spin is the second of Patricia Cornwell’s novels about her new character Captain Calli Chase, who works for a kind of high level, space investigation team linked with NASA. I found myself once more deprived of my regular routine of reading the first chapter of the new Cornwell novel on Christmas morning in 2020, due to the fact that this book was not released into the wild until a little after my birthday in January of this year.

Now, after over half a lifetime of reading her latest books on the exploits of her most famous character, Dr. Kay Scarpetta, I’m always the first to criticise Cornwell about straying from her Scarpetta character... which is why I was pleasantly surprised when I found the first novel in this new series, Quantum (reviewed by me here), to be just as compelling and breakneck as her signature series.

Nothing could have prepared me for this one though.

While the first book set up the characters to an extent, it turns out it was only a meet and greet of a novel and the real strengths of this new character are finally caught up with here. This one is a full ‘origin’ story, to coin a term which is more at home in a superhero comic and, frankly, that’s pretty close to what this novel does with Chase. I say this only with affection and admiration when I see that the character is changed and developed in this tome to the point where she wouldn’t have seemed out of place in a 1970s prime-time weekend television show and, frankly, while there are certain similarities with what Cornwell does here and her other writing, this one takes her new creation into another realm, not just in terms of where the reader might have been expecting her to go (no real hints on that from me but the last chapter of this book certainly sees the character already surpassing the potential she was trying to live up to in the first novel) but also in terms of creating a character that really wouldn’t look out of place in a popular comic book and who would certainly, I think, come under the umbrella term of post-human. Or perhaps... superhuman would be a better way to say it.

First things first though and as an answer to those who have read the first in this series... yes, we do finally get acquainted with her twin sister Carme in this book, after having heard of her exploits and possibly compromising activities in Quantum. And she’s not just a twin in terms of who she is but also in terms of the ‘enhancements’ to Calli’s character this time around. I’ll get back to that in a minute.

There are quite a few new characters but also the return of some regular ones like her friend Fran, who gets involved in the investigation while, as a necessity, still being quite in the dark as to what is actually going on. This involves a near fatal miss of an attempt on Calli’s life near the start of the novel and various plot deviations which, once again, involve Cornwell’s characters going through a story which is compressed into a fairly short space of time... no more than about five days in this case but, bearing in mind that Calli has about three days kind of wiped out, almost, from her memory... well, it’s an incredibly short amount of time again. There’s also a new character called Lex and, I’m pretty sure that he’s possibly going to grow up as the novels progress and become the Captain Chase equivalent of Kay Scarpetta’s niece Lucy... but time will tell on that one, I guess.

Okay, I don’t want to spoil the story so let me get onto the main thing which I applaud Cornwell for while also being left, frankly, a little scared due to Cornwell’s reputation for very rigid research which, presumably and as I’ve found in the past, leads to very factual representations of cutting edge technology which already exists (we just don’t necessarily know about it yet).

Basically, Calli is ‘knobbled’, in terms of she’s equipped with what I would best describe as modifications and a whole bunch of nano-technology running around her blood stream (plus contact lenses and glasses) which allow her to talk to the computer inside her head, who is constantly showing her stuff in her vision which is a constant information feed. A supercomputer called ART who can give her any data that’s authorised to her, hack in instantly to camera feeds from anywhere and a whole lot more besides. Not to mention her ‘wand’ features where she can just make various motions with her fingers to open any lock, hack any system and so on. I’m not going to get into all of the things that this new, advanced Calli can do but, suffice to say, she’s basically Iron Man but without the suit or the super strength (and for all I know, the latter might also be coming at some point). Just before I reached the end of this novel, a story hit the news that Artificial Intelligence software was being used to monitor and predict patients with heart problems and there’s not a doubt in my mind that Cornwell is not ‘just’ making things up here. Like my favourite 1930s pulp writer Lester Dent, she knows what’s on the cutting edge and she has a glimpse at what’s coming or, quite probably, is already here. So, yeah, this idea is kind of scary too, to be honest.

And, of course, since these novels are told in the first person by the lead character (just like the majority of the Scarpetta series), we get to learn all about Calli’s new ‘enhanced’ abilities along with her. And it’s smartly handled by Cornwell, as it usually is by a writer of her high calibre. I loved the way Calli is annoyed that ART seems to be forcing ‘functionality introductions’ on her in the same way that a person playing a character in a computer game might be introduced to the various rules and game mechanics at the start of a new level. But, of course, she’s also treating the reader in the same way, as a necessity.

What this also means, in terms of dramatic writing, is that she can monitor what her friends and enemies are doing in her head through various live feeds provided by ART and, therefore, Cornwell manages to break the confines of the first person viewpoint by Chase providing a running commentary on two or more absent characters at different scenes simultaneously. In a third person book you’d just crosscut between characters and that’s a luxury you don’t usually have in a first person narrative. Here, though, Cornwell has managed to find a plot mechanic which she’s built into the character which allows her to do exactly that while still staying with that same person. Mrs. Cornwell is nothing, if not a clever writer, for sure.

And that’s all I’m going to say about Spin other than, it’s another ramped up rush to the end game in this one and it’s amazingly entertaining and almost ‘unputdownable’ if you’ll allow me the luxury of making up words to fit the subject. I can’t wait to read another of these and so now, of course, I’m torn. As I follow her Twitter feed, I’m more than aware that Cornwell is currently working on her next Dr. Scarpetta novel, due out in November so... yay! I’ll be able to get back to my regular Christmas morning ritual this year. However, I also am beginning to love this new character almost as much as Kay and Lucy from those books so, yeah, I wish she could clone herself and write faster so we can have a new Captain Chase novel to read at some point soon too. I’ll leave it at that but, honestly, Spin is just another example of Cornwell doing what she does best... being a really great thriller writer. Still waiting for some movies to come out and, as always, I can’t wait for her next novel.