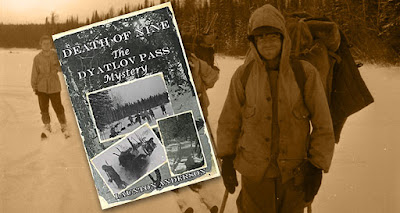 Death Of Nine - The Dyatlov Pass Mystery, by Launton Anderson, is my follow up reading to a fictional movie I watched last year. I saw Renny Harlin’s found footage horror movie The Dyatlov Pass Incident, a fictional solution to the real life mystery set in the present day, which took elements from this mystery and cleverly combined them with the famous American Manhattan Project conspiracies (and you can read my review of this gem of a horror movie here). I’d never heard of the real life incident on which it was based before then.

The Dyatlov Pass is the modern term for an area of the Ural mountains named after one of the University students and members of a hiking club who died there on a Category 3 hike, under mysterious circumstances. Because of the various and sometimes odd facts gathered from those available, before the Russian government seemed to clamp down on it, it’s a mystery that’s kept going and going to the present day. New theories about different types of avalanches which could have explained some of the conditions and various positions of each of the nine bodies (all within about a mile of each other) have emerged even as late as this January, posing this kind of ‘solution’ to the mystery and, because of renewed interest, even the Russian government reopened and reclosed the case, saying nothing untoward happened. Well... I guess certain types of murder could come under that category if you’re Russian military, maybe.

Launton Anderson’s book doesn’t try to come up with a solution to the various puzzle pieces here. However, she does include all of the facts that have been released over the years, in one form or another, along with a possible piece of deliberately false information passed on to people too, to highlight the case and give interested people an overview of just why it’s still too much of a cover up for people to let go of. She takes us through an introduction summarising the events of the tragic hike which began... and ended... in January of 1959, in the first chapter and then goes on in various chapters, to scientifically sift and examine the known facts, such as they are, of the case.

You know, it’s funny, whenever I look at a newspaper article now proclaiming the mystery as solved and ‘nothing but a’... I can only conclude that the writers of these articles must have never looked at the cold, hard facts of the case. As I delved deeper, as the author invites her audience into a closer look at the puzzle pieces, I realised that even Renny Harlin’s film... which of course was going to go into pure horror fantasy and that’s fine... missed out certain facts about the case which wouldn’t even begin to add up to something anywhere near his fanciful solution, just as they wouldn’t point to any old avalanche theory either and, once you’ve read the facts about the case yourself, you’ll see how preposterous the recent articles claiming the mystery has been solved are, when stood up against the real data.

In her book, Anderson uses translations of the remaining diaries of the group on the hike (read... ‘remaining diaries we are allowed to see’ and the bizarre type-written transcript of one overly detailed page which the public have been allowed to have, whether originally by accident or by design), the last photos which were developed and found in the rolls of film in the various cameras the hikers had of themselves on the fateful hike, photographs of the various members of the group before and, sadly, after they met with their terrifying fate and details of the autopsy reports of each member of the team, along with any other noted curiosities found on the various places where nine bodies, showing signs of foul play, were discovered.

I found out some very interesting trivia such as student Igor Dyatlov being the inventor of a special tent warmer (referred to as a ‘stove’ of a special design) and various other quirks about the team. However, I was also on a fully illustrated journey into a realm of horror myself as I read. Some of the notable things which don’t add up like a sliced up tent side with no crushed tent or signs of damage to the contents of the tent (and sliced from the inside over a period of considerable time it's been determined), a snow den which had been built, a storage area which had been built and no valuable or other items missing, as far as we know. A sliced up ski pole which the writer makes clear is not something which would have been allowed to happen lightly (or easily, in this case due to the material it was made from) and various other oddities combine make the incident seem anything but a freak, natural disaster.

Or how about the bodies, found in two groups plus some others in between two locations. There are signs of torture on all the bodies and ligature marks suggesting they had been tied and blindfolded. Military winding cloth was found at the site. The eyeballs of two of the victims (yeah, let’s call them that) were quite clearly, from the pathological evidence, removed from them while they were still alive. The positions the bodies were found in also show no signs of natural resistance to a disaster. I’m not talking about the fact that most of them were barefoot... which leaves a very interesting ‘elevated’ footprint signature in the snow, you can see some of their footprints from their ordeal in photos in the book... but the lack of defence posturing and the suggestion that the victims had been deliberately staged (quite possibly by the military). Then there are the oblique references in the diary to things which bring the possibility that at least two of the hikers may have been soviet spies, the torn and redistributed clothes with high levels of radiation on certain garments and the presence of a hunter possibly on their trail at some point. Not to mention a few other things which the author, probably wisely, dismisses as unimportant or to be taken at face value, not all of which I am sure of myself.

And if this isn’t enough to make you think there was a half botched cover up job initiated, then how about the fact that the government, one month after the autopsies were performed, closed down the whole area for 100 miles in all direction for three years so nobody could investigate anything. It almost makes you wonder if they needed that time to dismantle a military project or some such. Who knows?

Well, not me for sure and not many people I suspect. But I do get the feeling that some people must know what happened either first hand or possibly as inherited knowledge from top secret files somewhere. And since it’s the Russian government we’re talking about, I don’t hold out much hope that we will ever know what really happened to these poor people at the time. One thing I am sure of now, though, after reading this lady’s wonderful account and breakdown/translation of as many of the facts as she can highlight, with her guidance in presenting certain discrepancies and oddments of the various clues to the story... is that there’s no way this was a natural incident. These people were murdered and not only murdered but underwent a prolonged ordeal for a good number of hours before their difficult deaths. And that’s as close as the likes of me are ever going to get to finding out, I suspect. And now I have to extend my own research into phenomena like Infrasound and something called the Carmen Vortex Street, not because they are any help in solving the mystery (Anderson dismisses these and other fantastic theories due to obvious hard truths about the condition of the bodies) but because I’d not come across them before.

Death Of Nine - The Dyatlov Pass Mystery is an absolutely brilliant compendium of all the know information about the case up until this was published in 2018 and can be found at the usual online retailers. If you are interested in real life mysteries (I am) or true crime stories (which I’m not particularly, I found this book horrific but compulsive), then you would do well to check out this little tome. It’s quite chilling but absolutely brilliant and I think this is a mystery which will eventually die unless more people are aware of the facts... such as we have them, to date.