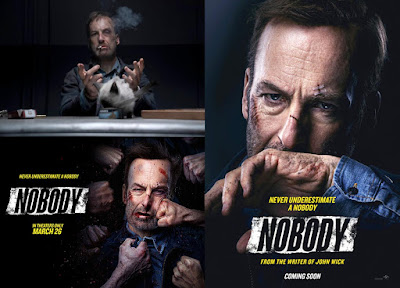 Contrary to what you may be thinking, Nobody is not a sequel or remake for the character in the famous Terence Hill movie. Nor is it, like a lot of reviewers have been suggesting, similar in style to the John Wick franchise... although, to be fair, it does have a few minor plot similarities and, sure, it’s loaded full of hard action sequences. This is nothing, if not an action flick with an upper case A! I’ve also read it’s a very humorous take on the action genre and, although it does have its moments, nope, I wouldn’t pigeon hole this movie as some kind of comedy thriller either. It does its own thing and it does it with a certain amount of style.

So we have a central character, Hutch, who was also known in the old days, for reasons revealed later in the film, as Nobody. He’s played by an actor who I’ve not seen before called Bob Odenkirk, who gives a very thoughtful and considered performance, I thought. Making what is, actually, the fairly fantastical, over the top, killing machine which productions like this have as their central role, a fairly believable person. Also, the writing helps out considerably here because, although he is the very definition of one of those super soldier action types found in a lot of cinema these days... he does take considerable hits and damage while he’s 'actioning away' and there are a few points when you think he’s not going to make it.

He lives with his wife played by Connie Neilsen (Wonder Woman’s mum... and I can guess why they’ve cast her as his significant other, if they get around to a sequel), his son and his daughter. His dad, played by Christopher Lloyd, lives in a care home and Hutch works a humdrum job for a boss played by the legendary Michael Ironside (who I’m ashamed to say, I didn’t even recognise... he looks so different in this).

The director takes a lot of time setting up Hutch’s bland, almost humiliating daily grind in a running day-by-day montage detailing his days Monday to Friday in short, quick cuts which get shortened with each repeat as the film goes through the days a few times more to hammer the message home (along with percussive, musical stings) that Hutch is not leading his best life. They then pile things on with a home invasion scene were Hutch doesn’t perform up to the expectations of his young son, a further blow to his ego (there’s a good reason he doesn’t defend himself as well as he might, revealed a little later in the movie) and, when he goes to track and reclaim a valuable item from one of the criminals, we see just where his heart is. On the way back, a young lady is threatened by a mob of thugs on a bus and then we get a quite spectacular scene where Hutch takes out the aggression pent up by everything we’ve seen thus far and he demolishes his opposition (while getting pretty beaten up himself). The problem is, one of the hoodlums he hospitalises is the younger brother of a very high up and extremely nasty ‘Russian mob bad guy’ and, when said villain finds out what’s been done, he comes for Hutch and his family. Which turns out to be, for the Russian and as you would expect in these kinds of movies... a bad idea. And that’s as much as I’ll say about the actual plot here.

The movie starts off strong with a heavily damaged Hutch in a police interview room, as we watch him, still in handcuffs, pull out a tin from a pocket and open it with a can opener, then pull out a little kitten from inside his jacket and put it on the table to eat from the tin. The two police detectives ask him who he is and then we (but not they), get the whole story as a flashback.

And it’s a nicely done movie with some solid performances and a crowd pleasing turn from Christopher Lloyd as the ex-FBI father who is pretty much a lethal weapon himself. There’s also an appearance from RZA of the Wu Tang Clan (who I remember seeing in a cameo in the Jim Jarmusch movie Ghost Dog - The Way Of The Samurai many years ago) and another cameo from Colin Salmon. It’s a solid cast and Aleksey Serebryakov, as the villain Yulian, also turns in a suitably unhinged performance.

The film rolls along very well and there’s a lovely bit of... hmm... what do I call this... inverted foreshadowing, where Hutch catches one of his co-workers trying to get something down from behind one of the ceiling tiles at some point and, towards the end of the film, it’s revealed just what it was she was trying to find and there comes a realisation that, yeah, we kinda knew that was coming all along. A nice little surprise which was hiding in plain sight, so to speak.

Also, the action sequences are handled very well. There’s never any confusion in the way it’s been edited so you know exactly where you are in a fight scene and you have the added bonus of never really knowing just how badly off any of the good guys in this are going to end up as nothing too ‘superhuman’ happens. Don’t get me wrong, the stunts and choreography are suitably over the top, as you would expect from a modern day action yarn but, there are no times in the scenes where you think that maybe any of the characters were performing in a way contrary to what a person would be able to sustain in a real life fire fight of this nature and... it feels very grounded a lot of the time.

Also, the ending of the film sets up the possibility of any number of sequels and I hope, if that happens, the writers won’t forget that Connie Nielsen can be a bit of an ‘action gal’ too and bring her in as her and Hutch certainly seem to have a ‘shared history’ in terms of their old professions... oh yeah, forgot to mention, there’s a very good reason why the central character can do what he does but I don’t want to spoil the character back story reveal here, other than to say that there’s a nice running joke in the movie as, every time he tries to explain his past to one of his opponents, they end up dying before hearing the end of the story.

So there you have it, Nobody is a nice action movie with, actually, a lot of heart in it. This could easily be made into a franchise and I’m hoping the very small audience numbers I saw it with don’t stop a sequel from happening in terms of box office takings. Oh... and stick around after the first minute of credits because there’s another nice little epilogue scene featuring Christopher Lloyd and RZA which isn’t essential but certainly lays more groundwork for any other sequels which may be coming. I’d definitely recommend Nobody to fans of the action genre, especially to those audience members who are getting a bit long in the tooth. A fine movie and I hope we see some more of these characters before long.