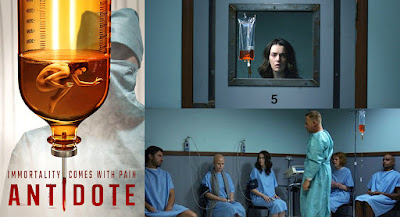 Another FrightFest UK premiere this year was Peter Daskaloff’s Antidote. It’s a relatively fast paced and effective film but I was kinda torn because it’s also a very obvious film with no real surprises at the end. Indeed, it almost seems a variation on a theme in terms of a few movies I’ve seen recently but, I’ll try my best to not spoil any of the moments which may surprise some viewers.

Okay, right from the start of the movie, where we see the aftermath of the death of the main protagonist’s ex-boyfriend, ten years before the main narrative picks up, I felt I was in good hands in terms of how the movie was made. The soundtrack, which is problematic in that it’s a hodge podge of different cues by different composers, if you look at the end credits (although the principal credit at the start of the film is Ryan Harrison), is actually very good. It feels like a few modern horror scores but really gets under the skin from the get go and it reminded me, in some ways, of the music used on the trailers of Hereditary a few years ago.

Then we meet the main protagonist, Sharyn, played by Ashlynn Yennie. She wakes up with a ruptured appendix and is rushed into hospital by her current boyfriend and daughter for emergency surgery. When she wakes up, instead of being in a regular hospital, she is in an experimental facility where different people are mutilated by the doctors and then cured with a special serum... an antidote to death... so they can then be tortured all over again. There are various ordeals on offer plus punishments if you try and escape. So Sharyn gets her foot and part of her leg sawed off, for example, when she tries to run before she gets it stapled back on and the serum fixes it after a while so it’s as good as new.

It’s nicely claustrophobic and as Sharyn’s back story plays out in flashback sequences, we have the head doctor, played by Louis Mandylor, in a truly sinister and emotionally muffled turn, questioning her as to various incidents in her past. This probing into her former life is, alas, the thing which tipped me off from very early on in the film, as to what is really going on here. Coupled with the visual knowledge that exactly the same torture is being inflicted on various ‘patients’... so eye gouging, tongue removal, burning alive etc... before they are cured to have it done again at some point, I sadly put together the obvious ‘twist’ reveal of the last 20 minutes of the movie extremely quickly near the start. Which is a shame because, other than tipping off the audience from very early on... well, it’s an otherwise well acted and nicely shot movie.

I won’t reveal anything about the central idea here other than to say, if you are suspicious about things then, when you finally see the name of the head doctor revealed about halfway through the movie, you’ll definitely figure it out for sure. Luckily, his name also points to a possible escape for Sharyn from her current situation and, I’d have to say, it was nice that I still felt that the end could go either way in terms of the central protagonist and where she finally ends up.

Enough about the ending, which I’m pretty sure most people figured out by the time it finished. The point is the hair raising subject matter has its moments but isn’t too gory or horrendous to actually watch and while the set pieces of violence (which mostly seem to be done practically rather than with an abundance of CGI) are there to give a kind of reminder and lively punctuation to the through line of the movie, the heart of the piece is definitely on the emphasis on the mystery element rather than anything else and this is what keeps you watching. After all, no matter if you have got it all figured out by 20 minutes into the movie, there’s always a chance you’re going to be wrong, right?

Perhaps the biggest ally in terms of attempting to keep the secret of the movie is the title of the film itself, Antidote. This suggests a medical horror and doesn’t take the usual route pursued when it comes to naming this particular sub-genre of horror film. Also, something which does help is that, even after you’ve figured out the central ‘trick’ of the movie, there’s some nice stuff at the end that lets you think about the possibility, or lack thereof, of hope for the majority of the patients depicted in the story. Again, I can’t say too much but if you do feel this movie is a bit of a one trick pony, it is nevertheless a quite stylishly conceived pony ride with a nice little Easter egg of content to ruminate on as the credits roll.

And that’s me done with Antidote. A not terribly surprising but certainly fascinating and entertaining exploration of a certain horrific theme which should at least keep fans of the genre amused for a while. Glad I got the opportunity to see this one. Perhaps a few little tweaks and less of a ‘wink wink’ name for the main doctor might have let it keep its secrets for a little longer, though.