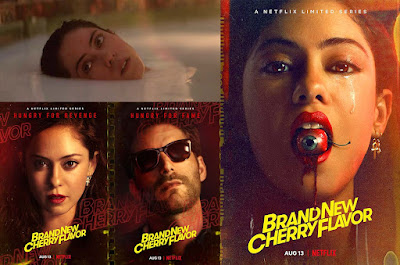 Warning: Very minor spoilers to give a flavour.

Okay, so Brand New Cherry Flavour is a series based on a novel of the same name by Todd Grimson. Once again, I have to forewarn you that I haven’t read the novel in question... yet, so I don’t know how good of an adaptation it is... I suspect there might have been some elements which were toned down for TV but that’s just a gut feeling.

The story set up is of main protagonist Lisa Nova, played here by the wonderful Rose Salazar... who also co-produced this show. It’s the early 1990s and she returns to Los Angeles to crash at her ex-boyfriends place while she tries to pitch her first feature film, based on the short movie she’s just made of horrific things going on in the woods. Erik Lange plays film producer Lou, who buys her movie, with her agreeing to that on the condition she gets to direct it. However, after she refuses to let Lou sleaze his way into her panties as part of the deal, he steals her movie and employs another person to direct. Lisa is so infuriated that she hires the services of a local witch, Boro, played by Catherine Keener, to put a curse on him to ‘set his life on fire’ and get her movie back. However, there’s more to things than meets the eye and it’s a long and twisted road until the end game is in sight.

And it’s a fairly okay TV show to be honest. It’s not as weird, dark or sexy as I’d been informed when I got interested in it but it is fairly entertaining. There are a lot of different ingredients to the show which includes the main witch, a faceless lady who may or may not be related to someone in Lisa’s past, the bitter ‘actress with one eye’ who starred in the original short, more traditional zombies, hired assassins, a trail of bloody corpses, sex spells, blood spells and a heck of a lot of vomiting up kittens... Lisa’s price for Boro’s services.

However, with all these elements which go into the show, it manages to not go through any tonal shifts throughout the eight episodes and that’s a double edged sword. It’s great that the show is so focused but the story arc gets a little over explored by about episode five and, although Salazar and a whole bunch of other actors... such as Jeff Ward and Siena Werber... are really great in this, it does get a bit monotone on occasion. Not to say it gets dull but, yeah, the odd tonal shift or two might well have been a way of ramping it up a little towards the end, to be honest.

However, coupled with the great acting are some good special effects (there’s a fair amount of blood and gore on display here), some nice shot designs with some bright washes of Mario Bava style lightning on occasion (especially in the early episodes) and a fair few surprises here and there. I especially liked episode four, which delves deeply into the world of David Cronenberg at one point, even pushing the sexuality in that one a little further than Cronenberg might have gotten away with in his day (there’s some fairly unusual fisting going on in a sex scene but I don’t want to say too much about why it’s unique here because it would be a spoiler) and, for me, this was the high point of the series. Although, on the down side, who the heck takes a bath wearing their knickers?

There’s some great dialogue in here too. I didn’t think of this thing as a horror show to begin with but, after I’d watched the first six episodes, I was describing the plot to somebody and, yeah, they’re right, it absolutely is part of the horror genre. There’s even a scene where you can glimpse George Romero’s Night Of The Living Dead playing on a TV set in the corner of a room. And there are also some very fan pleasing genre references such as, when Lisa is trying to coax a good performance out of her lead actress when making the short (something we see later in flashback), telling her, “I need you full on Isabelle Adjani Possession level!”... which is going to bring smiles to a lot of faces of people who remember the ‘milk scene’ from that movie, I suspect. And, also, there are some unusual, epically quotable lines scattered throughout the show such as, “That bitch just puked a cat!”

The series is actually left a little open ended, in a way, although I’m not sure you’d really want to see a sequel to this and I can’t believe there’s a heck of a lot of the book left to adapt, to be honest. That being said, I would be curious as to seeing what the few surviving characters get up to next. There’s also the odd plot point left unresolved which, I suspect, might well have been something shot (and it’s too late to work it in now even if it was, because the specific plot point I’m thinking of had an expiry date in terms of the continuing mortality of one of the characters) but I guess that’s one we’re not going to see cleared up anytime soon. Either way, Brand New Cherry Flavour, while not as ‘out there’ as I’d been set up to expect, is still a fun watch and Rose Salazar, who I’d loved in Alita: Battle Angel (reviewed here) is definitely someone to keep an eye on. This one is worth checking out for Keener’s sense of Baba Yaga too, for sure.