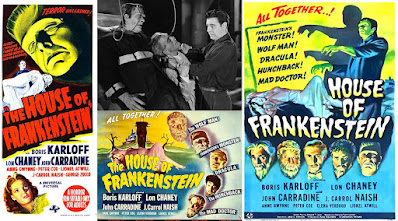 The Man
With Niemann

Okay, so after hitting on the idea of having two monsters for the price of one in Frankenstein Meets The Wolfman (reviewed here), what could be a more natural progression than to fashion a movie which would star all four of Universal’s main, flagship monsters? Alas, the budget proved too much for their original line up so, despite originally planning another continuity busting component of this film when it was originally to be titled, The Devil’s Brew, the studio ditched the idea of having Kharis The Mummy getting in on the fun here too.

But we do have, in House Of Frankenstein, the first film to feature Dracula (as played by John Carradine), the Wolfman (as played once again by Lon Chaney Jr) and the Frankenstein monster (played once again by Glenn Strange). Bela Lugosi was originally scheduled to return as Dracula but some scheduling difficulties arose when Boris Karloff, who is also in this film, had to be released from a stage contract... so the studio went with Carradine in Bela's role due to the delay.

Yes, that’s right, Boris Karloff returns to this film as Dr. Niemann, a murderous mad scientist who along with a fellow cell mate, a hunchback lab assistant played by J. Carrol Naish, escape from their prison in order to find the secrets of the Frankenstein monster and seek revenge on the village people who put Niemann in jail (not the ones who sing YMCA). So, yeah, it’s kind of strange to have Karloff in a Frankenstein movie in which he’s not actually playing the monster but, honestly, he’s very good in this. His wonderful line delivery and the way he interacts with the other characters really lifts the film.

There are also a few other names from previous Universal horror movies who people will recognise, all pretty much playing different characters to their previous one... such as Anne Gwynne, Lionel Atwill and George Zucco.

Now, the thing about this movie is that it’s not really a proper monster mash at all. In terms of the story connecting up the three monsters... well, it really doesn’t. Niemann and his assistant are the only connecting tissue in a story that is definitely a game of two halves. The film plays for 1 hour and 10 mins but Dracula is only in the first half an hour and the other two monsters don’t come into the story until after he has made his last bow. Again.

So Karloff and Nash take over a travelling side show trailer, Professor Lampini’s Chamber Of Horrors on the way to the village of Frankenstein. The trailer comes complete with a specialist exhibit in the form of the actual skeleton of Dracula, with a stake pinning it in its coffin. When Karloff pulls out the stake in anger in one scene, not even he would have believed it but we are treated to the skeleton transforming into John Carradine, who kills one of Lampini’s foes (played by Sig Ruman from A Night At The Opera) in return for Niemman’s help... a favour which doesn’t get returned because, while he is being pursued for his crime, Dracula gets caught in the daylight and returns back to skeletal form (until the next film... yeah, we’ll get that one in another review). Of course, this whole back story about the skeleton being unearthed in Castle Dracula in Transylvania makes absolutely no sense in terms of continuity with any of the previous Dracula films but, hey, that seems to become the rule rather than the exception by this stage in the series of Universal horror films.

The other half of the film deals with Niemann not fulfilling his promises to either his assistant or to Larry Talbot, the Wolfman, who he thaws out along with the Frankenstein monster as, it turns out, the flood which engulfed the castle at the end of Frankenstein Meets The Wolfman merely washed them into a cave system under the castle where they were frozen solid for many years. Niemann has promised Larry a brand new brain for his help which, frankly, makes a lot less sense to me than just putting his current brain into a new body but, yeah, I’m not a scientist so what do I know about such things?

Anyway, as usual, things go wrong but, astonishingly, even though the Frankenstein monster and Lon Chaney in his human form share a couple of shots, the Wolfman incarnation doesn’t share screen time with the monster... so there’s not even a big showdown between these two like there was in a the previous installment. So, at the end of this one we have Dracula back as a skeleton, the Wolfman dead by a silver bullet (again, it’s only a temporary fix) and the Frankenstein monster engulfed by quicksand in much the same way that Kharis the mummy had sunk into a swamp the same year in The Mummy’s Ghost (reviewed here).

But, despite all this, the movie is rather well made and quite entertaining. Kenton seems to have an eye for the design and lighting of these things and there are some nice compositions which lead the eye into the centre of the frame quite a lot. Also some great scenes shot through vertical bars of windows and fences (and sometimes both) which make an impression... not to mention the placement of people at different heights to balance out the shots. And, of course, Hans J. Salter’s score does the usual thing and gives it the kind of music one always associates with these Universal monster pictures.

Admittedly, it’s a disappointment that at least two of the monsters don’t actually meet up properly in this one but these characters would all share the screen two more times for this era of Universal horrors and so, their time would come. House Of Frankenstein is one of the better B-movies of this era and a pleasure to watch every now and again... even if it features neither Frankenstein (it just features his more famous monster) nor, you know, his house. Essential viewing for admirers of these franchises, though, for sure.