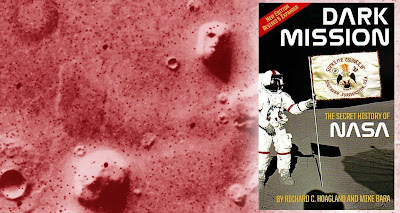 First things first. This is a review blog so, don’t expect a blow by blow account of the many ridiculous but, ultimately, seemingly flawless deductions and conclusions that make up this astonishing book... Dark Mission - The Secret History Of NASA by once NASA/TV company envoy Richard C. Hoagland (he covered the moon landing for television in 1969, among other things) and his friend and sometime actor/director Mike Bara. For one thing, I didn’t understand it all because, as has been mentioned in a lot of Amazon reviews actually, it is quite technical in places. Thankfully, that accusation could only be levelled at a couple of chapters relating the science behind the explanation of just what has (and is) going on with mankind’s relationship with moons and planets in outer space... where my grasp of physics failed me somewhat. For another thing, trying to compress that all into a short review would do the opposite of how I’d like to portray the book, by showing just how madcap the theories are, even in light of some very compelling evidence as far as I’m concerned... and I’ll get on to why it’s compelling a little later.

However, for the sake of getting you interested in this remarkable tome I will say that it deals with... some would say ‘quite obvious’ truths from the many photographs reprinted here from various sources... artificially made structures on both the Moon and also the surface of Mars (yep, this is all about Cydonia here, too), the Freemasons along with their symbology and rituals, the Nazis and the secret cults and societies which guided NASA and who JFK was reacting to when he started up the space programme, the death of said Kennedy, the numbers 33 and 19.5 (which is a Masonic thing which some of you will be familiar with and others, like me, would be ignorant of until they’ve read this book), ancient deities like Isis, Horus and Osiris... and an overlooked but very real branch of very early physics hundreds of years old dealing with a parallel hyperspace dimension which, if we’d have stuck with it, is very useful to explain some planetary anomalies which we can see exist... and even including topics like the scientist brother of director Brian De Palma, who was doing experiments on phenomena attached to that realm before his untimely death.

There... that certainly doesn’t cover it all (it’s a chunky book) but it does give you an idea.

Okay, now another thing I’ll throw in to the mix is that I’ve always been interested, from a distance, in conspiracy theories and Hoagland and Bara are certainly self confessed conspiracy theorists but, that doesn’t mean they are wrong and, as this book got more and more ludicrous as it went on... and I was trying very hard to not believe them... well, like I said, I found it compelling. Now when I was a kid I kind of believed in conspiracies and now, as an older kid in my fifties (yeah, like I’m ever going to be an adult), I try my best to disbelieve them and see if my mind can be changed. Let me tell you now, to a great extent, Hoagland and Bara changed my mind.

About twenty five years ago I got interested in alien abduction and UFO theory again. I researched by reading various books and websites and even used to know someone who worked in a civilian flight control tower who... well, he had some stories... and in the end it got too much for me. I really started to see the chains of evidence, mostly circumstantial, taking on a certain weight from the way the evidence was blocked and hidden rather than just being allowed to peter out and collapse on its own, as it would if it really wasn’t evidence at all. And I have to say that, asides from the quite compelling photos and other things which paint a story and which all cross reference each other here... even though times, dates and sources all differed from each other... exactly the same thing I used to find convinces me even more about what the two authors are talking about here. I’m not saying they’ve got everything right and I think they’d be the first to admit that. But a lot of what they’re saying and describing makes me think they are certainly in the same ‘ball park’ as ‘the truth’ for sure... whereas NASA would have you booked into a totally different ball park where a game wasn’t even taking place. Oh, yeah, by the way, as much as I never trusted NASA from little news items that used to filter through to the UK over the decades... I trust them even less having read this book.

Okay, so the thing is, NASA have done their best to quash, push back, hide and disappear the evidence of what was really going on with the Moon landings and the Mars probes. And there’s good evidence, it seems to me, that various experts have uncovered a whole lot of ways in which the officially released photos of various areas of the Moon and Mars which have been let out to the public (and there are many) have been manipulated, degraded and altered via image software (and even at the camera stage some major compromises were even ‘built in’ to the system). However, I’m a graphic designer and I know how, for example, at the very basic level, a black photograph taken outside of anything with no light which looks totally dark, can be quickly enhanced via Photoshop to provide all kinds of real life details of the image which the naked eye has missed. Now that’s probably a fairly simplistic analogy to what Hoagland and his expert associates were doing but they definitely seem to be doing the right things and doing an awful lot of detective work on the image evidence shown in this book. Why detective work? Well, because if you can get cross referenced evidence to discover exactly what things were done to manipulate a photo in the first place... then you can do a lot of good work undoing a fair amount of that manipulation. At a very basic, low end level which is nothing like a lot of what was done here but, by way of simple demonstration to you to explain the concept... sometimes if a picture is too pixilated and grainy but is really wanted in a print project, I might blur it and then resharpen it to eliminate the pixilation and therefore get a clearer shot. Hopefully, that makes some sense to you.

Anyway, the book is compelling because it shows just how much trouble NASA and various other agencies working with them have gone to hide and disprove the various bits of evidence. And when people go to those lengths, like the old “what a tangled web we weave, when first we practice to deceive” quote, they manage to contradict themselves and catch themselves out publicly. So enough of that then, suffice to say that Hoagland and Bara have these things more than covered in this book too.

Perhaps the most disturbing and saddest swaying factor though, is what has happened to all the people who visited the Moon since they returned to Earth. I’m talking about Alan Shepard, Buzz Aldrin, Neil Armstrong and a whole host of others. There are certain things these astronauts won’t talk about, it would seem and also, a lot they can’t remember (and quite possibly are programmed to not remember or, at the very least, are ordered not to reveal) and this can hit them quite hard psychologically sometimes, by all accounts. In fact, there’s some evidence to suggest that some of them are almost deliberately prodding the public in statements made to try and unearth things they’re not allowed to talk about. I think there’s a lot of cloak and dagger stuff going on behind the scenes and, frankly, I worry for the safety and well being of both them and their nearest and dearest if certain things ever started to come to light. That last half a sentence is my own speculation leaking through now though... so I apologise for that.

Ultimately, there is a lot of red hot stuff in Dark Mission - The Secret History Of NASA which, unfortunately for my state of mind, makes a hell of a lot of sense (and I wish it didn’t). And I suspect that Hoagland and Bara have a lot of other stuff which didn’t make it into the book too... although they certainly don’t suggest that. What they do shy away from, however, is making a lot of speculation as to the implications of all that’s been discovered in the decades of research which have gone into this book. They include only what they see as facts... you will get hints as to where their minds may take them but it’s not down here in black and white. Deduction rather than projection, for the most part, seems to be the order of the day here and, if nothing else, I admire them for that. And of course, if you read about them on places like Wikipedia, they are painted within a stones throw of being crackpots but, again, so would a lot of people trying to find out the truth about a whole variety of issues over the years and, obviously, sometimes those people turn out to be dead right and the only sane ones in the room, so to speak.

Hopefully now I haven’t come off as a crackpot myself for supporting this book here (although I probably have). At the end of the day, I found Dark Mission - The Secret History Of NASA to be an absolutely ‘unputdownable’ and, sometimes, quite disturbing book and, despite how it might make me look, I’d have to say that this is one best seller which I would recommend to anyone who is interested in the history of man’s encounters with space. And I’m hoping, since it is a best seller, which means it must be a popular book, that not too many people will judge me too harshly for doing so. So there you have it. Go read this damn book, it’s quite remarkable... but more than a little worrying too, I think.